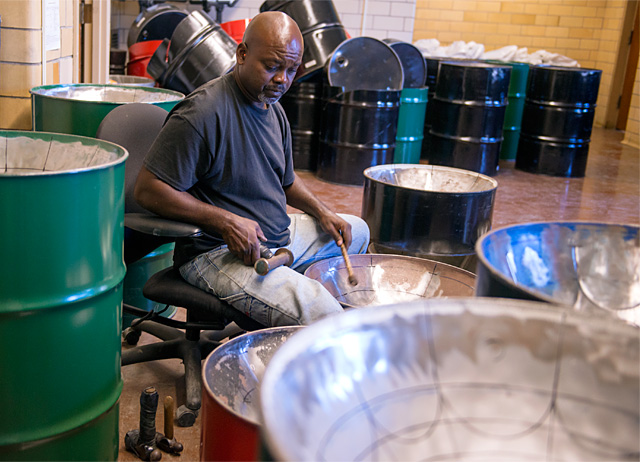 Steel drum team from Antigua is spending two weeks at Monroe High School building drums for school club as part of a cultural exchange. Apparently, they built drums for the school 20 years ago.

ROCHESTER — Pounding away for up to 12 hours a day for more than two weeks, two brothers from Antigua and one of their sons built new steel drums for the band at James Monroe High School.

Nearly 20 years ago Veron Henry built the original drums that are still being played by students. Those drums were for the student band at John Marshall High School, which closed two years ago and where Monroe High students have been housed since last fall while their school undergoes an extensive renovation.

Henry and his brother, Orville, and son, Jawan, were able to debut the new instruments with Monroe’s Urban Steel band during a Back to School open house at Marshall on Aug. 31. The trio had worked on the new drums every day except Sundays since Aug. 10, Veron Henry said.

"We built (the) drums the first time … in this room," Veron Henry noted during an Aug. 23 interview. "It was a pleasure to come and impart (this instrument) in to Marshall High School."

His family has been sharing its knowledge for more than seven decades. His father, Eustace Henry, was the founding member of the first steel drum band in Antigua, known as Hell’s Gate Steel Orchestra, he said. Veron and Eustace Henry were performing with Hell’s Gate in 1997 in Rochester through a Partners of the Americas collaboration.

The program paired areas of North America with areas in South America, explained Lisa Scott, who teaches music and directs Urban Steel at Monroe. Rochester was connected with Antigua in the 1980s, she said.

It was during Veron and Eustace Henry’s 1997 trip to Rochester through the Partners of the Americas program that their relationship with Marshall began, Scott said, and they built the original set of steel drums.

Building a drum takes a lot of hard work, Veron said, and requires grooving, smoothing and firing the metal. Then, to tune the drum, a drummer must hammer around the note, sometimes hitting the note and then relaxing or tightening the metal to correct the note. A lead pan drum has 29 notes on it, Scott said, and the individual drums each play a whole octave for three notes.

"Veron is a genius," Scott said. "He composes on the fly. He’s just an amazing guy."

Although the original drums were built in 1997, they were not used by students until 2000 when the Henrys returned to teach classes. After that, a former music teacher, Mary Taylor, kept the steel drum music program going, Scott added.

During the Henry family’s visit this summer, they also tuned the lead drums and notes on several other drums for the Monroe students, Scott said, and those drums will remain in use for music classes and band practice. The new set they built included eight lead drums, she said.

"It’s such a complex thing," she said of tuning the drums."We could never do this all by ourselves."

The complexity of the steel drum also relates to its early history and finding a place in society, Veron Henry said.

Scott noted that Eustace Henry was a blacksmith who worked at a young age to help support his family and had first heard of the steel drum when he was in Trinidad.

When his father brought the instrument to Antigua to start a band, Veron Henry said that the wider music community did not accept it, and that a petition was even started to have it outlawed in the 1940s.

"He went through all the struggle, trials and tribulations," Henry said of the challenges his father faced in bring the instrument to Antigua.

Eventually, the drum gained popularity and is now played all over the Caribbean, including at churches, noted Veron Henry.

"I’m delighted to know that this instrument went through so much and is now being loved by everyone," he said.

Clifton Wright, 15, said he loves playing in the steel drum band, especially since it offers students new opportunities and a chance to play in new places. And he is grateful for the Henrys’ commitment to helping the students by building the new drums, Clifton said.

Eventually, Scott hopes her students will be part of an exchange program that was part of the original Partners of the Americas collaboration with St. Joe’s Academy in Antigua. In the past, members of Urban Steel had visited St. Joe’s every couple of years and vice versa, she said.

"When Marshall closed, everything changed in both cities," Scott said. "My goal is to get the exchange back."