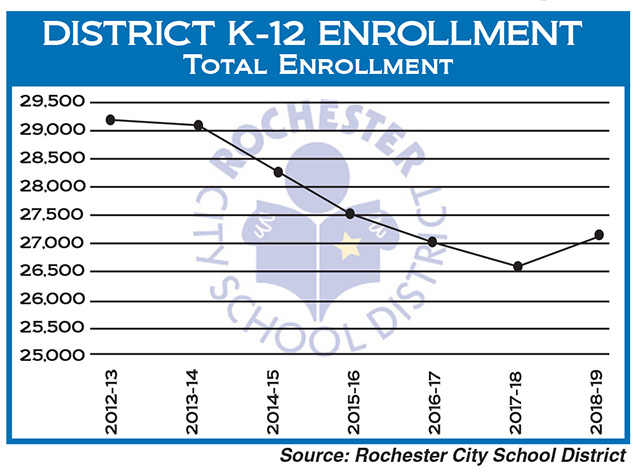 ROCHESTER — The Rochester City School District’s budget proposal increases staffing and closes a $52 million budget gap, but a local advocacy group says the spending plan does not go far enough in addressing the needs of a growing number of Latino students.

During a special meeting March 27, Superintendent Barbara Deane-Williams presented the $957 million budget proposal, which represents a 6 percent increase in spending over this school year’s $900 million budget. Budget review sessions and a public hearing are scheduled this month and in May. The school board is scheduled to adopt the budget on May 15, according to information at https://bit.ly/2uKTOVj.

Following the March 27 budget presentation, members of a Latino education task force said funding for a number of issues outlined in a letter to the superintendent in February were not included, said Anthony Plonczynski, the task force chairman. The task force was created several years ago in collaboration with Ibero-American Action League and the University of Rochester.

According to the letter, the main areas of concern are: hiring a director of bilingual education (there currently is an acting director); establishing a permanent newcomer academy specifically for Latino students; and developing a strategic plan to improve Latino academic achievement by adding bilingual teachers at the elementary level and creating a secondary bilingual program at the high-school level.

The superintendent’s proposal adds an administrative position called the director of youth engagement and cultural relations, which Plonczynski said does not appear to address the task force’s specific cultural and academic achievement concerns.

“We have not made progress in those areas (noted in the letter),” Plonczynski added. “And we have the added urgency now because of the growth in the Latino population.”

Because of the influx of students from Puerto Rico and other areas affected by hurricanes last fall, district enrollment is projected to increase in the next school year for the first time since 2002, Everton Sewell, the district’s chief financial officer, said during the March 27 budget presentation.

The district expects to continue to enroll students from Puerto Rico, he said.

More than 130 teachers will be hired to help meet these growing needs, Sewell said, including 22 reading teachers and 11 English for Speakers of Other Languages teachers, as well as 38 special education teachers and 10 additional behavioral specialists.

The district funded those additional teachers while closing the budget gap by using its appropriated fund balance, finding savings across all departments, reducing the number of instructional coaches, and anticipating additional state aid, Sewell explained.

Beatriz LeBron, a newly appointed school board member, said that while staffing may be increasing, she has not seen funding for continuation of the newcomer program created for the students from Puerto Rico that is currently housed in district space at 30 Hart St.

She is awaiting answers from the administration on that issue and other questions, LeBron added.

The increase in bilingual seats at the elementary level has been taken into consideration in the budget planning, noted district spokesman Carlos García. The plan is to include funding to continue the newcomer program, he added, which is likely to be relocated from the Hart Street location.

The Hart Street program is only a temporary fix, noted Plonczynski, and a program designed to meet the specific needs of new Latino students has never been fully implemented despite the Latino task force’s ongoing attention to it.

“The current program has merit, but it’s a Band-Aid holding the line of the current influx of students instead of stopping the bleeding,” he added.