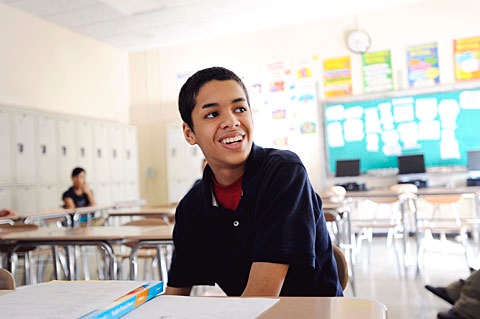 ROCHESTER — If local community leaders don’t immediately seize the opportunity to change the future for Latino students, the loss will be immeasurable.

One in five Latino students currently wind up in special-education classes — marking a ratio considerably above the recommendation from the state education department, according to Ed Fergus, deputy director of New York University’s Metropolitan Center for Urban Education. The district has contracted the center to help address the issues of Latino students in Rochester, and the center’s staff helped facilitate the summit.

"Schools are intended to be protective and lead kids on the right path," added Fergus. "But they can also become a risk."

That risk is heightened when so many Latino students are placed in special education — perhaps only due to language barriers, Fergus said during preliminary remarks intended to arm summit participants with the statistics that they would need to work on improving achievement overall. After presentations by Fergus, outgoing Superintendent Jean-Claude Brizard and school board members Melisza Campos and José Cruz, the group of about 60 people — representing higher education, nonprofit and social-service agencies, and businesses — split into four groups to address the topics of achievement and attendance, English-learner programs, youth opportunities and health.

Each group came up with at least one concrete idea that will be included in a follow-up report to be released mid-June; the objective is for their projects to be set in motion before school begins, Fergus explained. But the work won’t end there, he noted. In late fall, these community leaders will gather again to give progress reports, he said.

"Something has to change or the community loses," remarked Rosario Escher. "And not just the Latino community but the community in general — even nationally — if we don’t do something about this issue."

One idea that surfaced even before the summit was to have a local organization adopt Monroe High School, which has a high concentration of Latino students. Ibero is planning to step forward as an "adoptive" parent to Monroe, she said, but added that details of the relationship have yet to be worked out. Monroe Principal Vicky Ramos spoke at the summit about the progress her school has been making, noting that the total number of suspensions has dropped from nearly 700 in 2004 to just over 100 last year. Math and English scores for seventh graders also have improved dramatically, Ramos remarked.

"We’re going to bring resources in … and see what their needs are," Rosario Escher explained. "We want to ensure those kids are successful."

Ibero already is one of several agencies that assist students through a student-support center at Monroe, Ramos explained. A recent study commissioned by Ibero and conducted by the University of Rochester’s Warner School of Education showed that offering such additional support to students — whether through an individual mentor or an agency — often is a key to academic success and college admission.

During the summit, Ramos also explained that she has created a culture of caring for her students at Monroe.

"My job is to advocate for these students," she said.

And that’s a huge undertaking, given that newly arrived students in New York state are forced to take the same state English exams that are administered to students in other schools and districts who have been able to prepare for the exams for years, Ramos remarked.

"Yes, I am passionate. But you have to be when you have my kid of three months (living in Rochester) competing with a kid who has been here (in New York) nine years. You call that fair?" she asked rhetorically. "But the bottom line is we have to prepare them for college."

Monroe students Jessica Morales and Joshua Ortiz said during a May 5 interview that college is their destination thanks in large part to the support of teachers.

Morales, 18, said she had the opportunity to attend the "Women of Hope" program at Roberts Wesleyan College for students interested in opening their own businesses and making their own products. She said hopes to be an art teacher and maybe open her own business in the future. She is on the waiting list for admission at Nazareth College.

Joshua is taking a less traditional path to college as a 17-year-old sophomore. He only arrived in Rochester from Puerto Rico two years ago and spoke little English. Calling himself a "troublemaker," Joshua said he initially did not care about school. But when teachers began to show they cared about him, his attitude began to change. Ramos said her efforts to get Joshua back on track were supported by his mother.

He received afterschool tutoring through the school’s partnership with Hillside and now speaks English well and with confidence. His grades have improved, and he has joined a peer-support group — the Caballeros (the Gentlemen) — which was created last year.

"Seeing that teachers care made me … want to come to school," he said. "My self-esteem was so low that I thought I couldn’t make a change. Thanks to (this) school … I’m ready for anything."

Language barriers and a sense of isolation are challenges faced by Latino students, and Joshua and Morales said they feel valued that a group of community leaders is trying to help them succeed. Both also expressed pride for their culture.

"Knowing people care and do support us makes us stronger," Joshua said. "In the future, maybe we’ll help others. That’s important."

Ramos said also she was very encouraged by what she heard at the summit. Just the participation of various community stakeholders — — in itself was a good sign that recommendations coming out of the summit will truly make a difference in the lives of Latino students, she added. Latinos comprise 22 percent of the district’s more than 33,000 students, according to information from the district.

"When we see the recommendations, we will know what roles the different agencies will have and what involvement they will be able to provide," Ramos added.

Fergus noted that organizers of the summit invited leaders from a variety of institutions to ensure a breadth of participation in this important task.

"It is not solely the responsibility of the school district to do this work," he said.

The Rev. Luis Perez, executive director of the Horizons summer program at The Harley School, said he felt the summit needed more representation from the faith community because of religious leaders’ close personal ties with many Latino families. The Rev. Perez added that he also is concerned that the summit will be one of an endless number of reports and discussions focusing on Latino students without producing many changes. Yet he said he is not without hope that this time the outcomes will be different.

"Even if they took one strategy and moved on it, something has happened," the Rev. Perez said.

Cruz said the sense of urgency was understood by those who attended the summit, which is an important point.

"We’re going to find a very different approach," he added. "We want to make sure we’re productive and not just meeting for the sake of meeting. We don’t want to waste time. I’m too old to waste time."