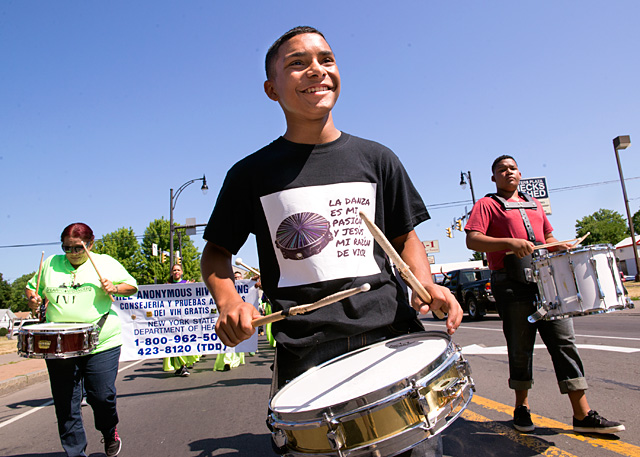 ROCHESTER — The inaugural Community and Youth Fair held last month on North Clinton Avenue was everything young people in the neighborhood could hope for, said Francisco Ortiz.

"We need positive things over here," added Ortiz, 22, after stopping by the June 25 fair.

"We have lots of things going on, lots of problems like drug use," he added, noting how a recent shooting had taken place across the street from the fair’s location. "This is what we need: entertainment, positive things and sharing information."

The fair kicked off with a parade down North Clinton Avenue from Avenue A to Sullivan Street that ended at the vacant lot on the 800 block of Clinton, which is diagonally across St. Michael Church. The lot has been designated for the La Marketa development that is in the works and could include retail and housing, city officials say.

Wanda Martínez from Ibero-American Development Corp.’s Project HOPE agreed with Ortiz that youths in the area needed to see other alternatives for the vacant lot. That is why she reached out to churches and agencies to participate in the fair, she said.

"We wanted to have youth perform and dance … and take back our streets," she added.

The fair also shows the community what can be done when residents and community groups work together.

"This is a chance for us to grow and create good feelings," she said.

The event was spearheaded by Project HOPE, an initiative to improve northeast neighborhoods that is funded by the Greater Rochester Health Foundation.

Project HOPE and the Ibero agencies partnered with a local church, Iglesia Jehova Jireh, to organize the fair that Martínez hopes will become an annual event. Several community agencies participated in providing information to residents in the area. Families also had access to free food, books and clothing from Ibero-American Action League and Foodlink.

Charelis Layer of Rochester, 20, performed in one of the dances. She said she hopes other young people see that they can turn away from drugs or gangs by joining positive activities with area groups and churches.

"I want to help (people)," added Layer, who plans to go to nursing school. "We should have this (fair) not just in summer but in winter too."

Bredes Acevedo, pastor with the local Jehova Jereh church, added that churches and groups in the community need to continue working together to offer these kinds of positive activities.

"Working hand in hand, we can improve our community," she said.