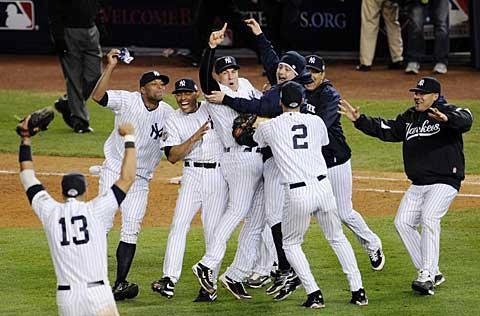 He was holding the World Series Commissioner’s Trophy in his hands after the Yankees’ Game 6 clincher Oct. 4. He rubbed it, he kissed it, he practically caressed it. There were real, honest tears in his eyes and nothing phony about his feelings for his teammates, from Derek Jeter to Jerry Hairston Jr.

A gazillionaire who has moved through dozens of relationships had found a lasting bond. His season, one that had started as badly as possible with an admission of steroid use that clouds his standing as a future Hall of Famer, had ended with him earning respect along with a championship.
"There have been a lot of ups and downs," Rodriguez said. "Overall, nothing you can do can compare to winning a championship with 25 guys buying into one thing — winning."

After Oct. 4’s victory, Mark Teixeira, CC Sabathia, A.J. Burnett, Nick Swisher and others who, like Rodriguez, were first-time champions on the big stage celebrated with passion, first on the Yankee Stadium field and then in the clubhouse. Jeter, like Mariano Rivera and Jorge Posada, now a five-time World Series champ, was as wide-eyed as kids like Joba Chamberlain and Brett Gardner.

It’s easy to see how. There were 31 playoff games this fall, beginning with one that is counted in the regular season, the Tigers-Twins game to decide a division championship, and I covered 18 of them. I saw six of eight games where a team was eliminated, including ones in St. Louis, Boston and Denver on consecutive days, but the unadulterated joy of the Yankee celebration caught me off guard.

It’s easy to see Team Steinbrenner as so many dollar signs. But that $201.5 million payroll is comprised of real people and it was ballplayers, not agents, money managers and highly paid nannies who ran through the playoffs 11-4. I won’t forget being there when the Yankees won their 27th title.

Among other lasting memories of the fall:

It seems forever ago, but the Rockies’ Carlos Gonzalez, 23 and already twice traded, used a four-game playoff run to establish himself as one of the game’s potential stars.

He showed true five-tool skills for the Rockies, going 10-for-17 with two doubles, one homer and two stolen bases while playing a great center field.
It was a bad postseason for umpires, as most have been in recent years.

The worst call of all was by Tim McClelland, a crew chief, somehow missing a double play when the Yankees’ Robinson Cano and Jorge Posada were tagged as they tried to avoid occupying third base at the same time in an ALCS game. Replay later would allow umpires to turn correctly what appeared to be a Rodriguez double into a homer in Game 3 of the World Series.

The Yankees won three of four games in which manager Joe Girardi used his starter on three days’ rest, the exception being A.J. Burnett in Game 5 of the World Series. But was it a good idea. Sabathia, Burnett and Andy Pettitte had a 2.00 ERA in 72 innings in 10 fully rested starts in the postseason and a 5.24 ERA in 221/3 innings on short rest.

Nobody needs more damage control than Tigers slugger Miguel Cabrera, whose arrest for drunkenness (and his 0-for-11 against the White Sox) was the storyline when the Tigers dropped four of their last five games to miss the playoffs. Never mind he had a homer and a double in the 12-inning loss to the Twins in Game 163.
Cliff Lee, what a guy. The Phillies ace not only went 4-0 with a 1.56 ERA in his five playoff starts but was 3-for-11 at the plate and even picked up a stolen base as a pinch runner.

Johnny Damon stole two bases on one play and in the process helped the Yankees turn the World Series with a ninth-inning rally against Brad Lidge in Game 4.
NL MVP Albert Pujols, his team swept out of the first round in three games, left Busch Stadium without talking to reporters. He later said he hoped to spend his entire career in St. Louis but his body language spoke volumes in a somber clubhouse.

Manny Ramirez, such a force for the Dodgers last year, had one home run in 32 postseason at-bats this time around. Ramirez is returning for a third season but only because it’s him, not the team, holding the $20 million option for 2010.

Mariano Rivera was there through everything. Closers on the other seven playoff teams were 9-for-15 in save situations; Rivera was 5-for-5, running his career playoff save total to 39, including 11 in the World Series.

His contract is up after next season but he said, "I think I’m going to stay for another five years."

Who would want a ride like this to end?