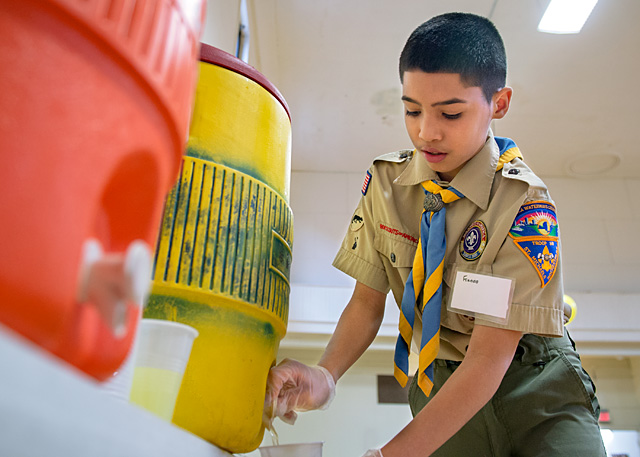 ROCHESTER — Felipe Ríos believes his experiences as part of a Boy Scout troop during his teenage years led him to choose a military career.

"It prepared me mentally and physically," he said during a Jan. 15 fundraiser for Boy Scout Troop 147 at St. Michael Church. "(Scouting) gave us a work ethic, and we got to go on outings and do things we wouldn’t be able to do otherwise."

Now, Ríos is giving back serving as an assistant Scoutmaster for the fledgling troop, whose members mostly are from Los Flamboyanes Apartments on North Clinton Avenue. The troop’s number, he noted, is the same as the troop he was a member of during the 1980s and early 1990s at the former St. Bridget Church.

Ríos said he was among several former Troop 147 members and leaders who decided in the fall of 2015 to revive the troop. They started out with about 25 boys, but about 10 regularly attend the weekly meetings held on Monday evenings at St. Michael’s, Ríos added.

The troop leaders are planning to boost their recruiting efforts this year at area churches and nearby schools, he said.

"We are trying to get the word out there that we are here," Ríos said.

Franco Rodríguez, 11, joined the troop last year after hearing about it at school.

"I just wanted to see what it was like and discover stuff," he said.

The experience has been nothing but positive, including camping trips to Webster Park and at Massawepie camp in the Adirondacks, he said. His goal is to become an Eagle Scout like Ríos.

"It’s awesome," Franco said of being in the troop. "There’s always fun stuff you can do and explore."

Franco’s mom, Jessica Vargas, said that as a single mother, she appreciates her son having positive male influences in his life. She supported the idea of her son joining the troop from the moment he presented the idea to her, said Vargas who also is a member of the troop’s advisory committee.

"I thought it was a good idea to give him a better environment and support and keep him away from bad influences," Vargas said. "And (troop activities) keep him busy and motivated to be doing the right thing and helping the community out."

Johnathan González, 14, said he joined to have something to do besides school.

"The troop helps you with your actions," he said. "They teach you not to be rude to adults and how to be nice to other people."

Besides camping and earning badges, the Scouts also have done community service projects such as visiting with residents of a nursing home. The $600 raised from the Jan. 15 fundraiser at St. Michael will help support the troop’s trip to the national Jamboree in Virginia, Ríos said. The trip will include a tour of the Washington, D.C., area.

Those are the kinds of trips the original Troop 147 took under the leadership of Duane Stevens, who served as Scoutmaster beginning in the late 1980s. After having been an Eagle Scout, he approached the former Otetiana Council of Monroe County, which is now Seneca Waterways Council, about how he could give back to the organization. The council asked him to start a troop in the Baden Street Settlement area. He recruited at St. Bridget, where Father Bob Werth was pastor, and nearly 30 boys joined. Father Werth is now copastor at St. Frances Xavier Cabrini Parish, which includes St. Michael Church.

The troop lasted for about 15 years, including a move to St. Mark Church in Greece the last couple of years, Stevens said. Every summer, the boys camped at Massawepie as well as undertook a summer tour of different areas of the country, he noted. A few times, the troop traveled across the country, including stops at the Grand Canyon and the Arch of St. Louis, Stevens said. The troop’s cross-country travel was sponsored by a anti-drug campaign and the Scouts would distribute fliers at the different spots, Stevens said. His own son, Victor, went on to become an Eagle Scout, he said.

And life has come full circle as his son is now an assistant scoutmaster along with Ríos and two others for the new Troop 147.

"We’re going to successfully bring back urban Scouting back to where we need it to be," Stevens said. "There is nothing like Scouting, which teaches duty to oneself … duty to family and community. Duty to God and country."