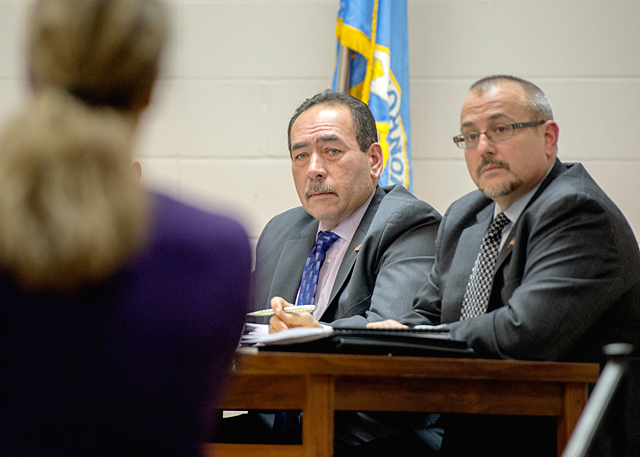 GATES — Lee Cordero did not mention his Puerto Rican heritage during his 2013 campaign for a seat on the town board.

He said he is proud of that heritage, but also is a "take me as you see me kind of guy."

"I don’t want somebody to vote for me or do something because of my nationality," Cordero explained. "Vote for me because you like me for the things I’ve accomplished and stand for or don’t."

Cordero recalled a resident asking him during the campaign what he was promising to do and whether he was "a typical politician."

"I said, ‘One thing I will promise you is that I will always tell you the truth. You may not like it, but at least you’ll know what avenue to go to next,’ " Cordero said during a Jan. 14 interview at Gates Town Hall.

After winning the election in the fall of 2013, Cordero said he felt an even greater sense of pride upon learning he was the first Latino to be elected to a suburban board in Monroe County. The county Board of Elections confirmed this distinction, Cordero said, as did Michael Fondacaro, editor of "Noticias y Notas," an online newsletter about Hispanics in New York and New England.

"My mom and sisters are very proud of him doing something like this," remarked his older brother, Ken. "Especially being Hispanic just adds to the whole thing."

The brothers’ ethnic pride stems from growing up in the Dutchtown area of Rochester, where the Corderos were the only Puerto Ricans on the block. Lee Cordero remembers being called names and having police show up at his house whenever incidents occurred in the neighborhood.

Such personal experiences give him empathy for Latino youths who struggle today, he said, adding that he hope his success shows youths the value of setting goals and working hard to reach them.

Cordero has become a positive role model not only for Hispanics but for the community in general, noted Gates Town Supervisor Mark Assini.

"The fact that he does carry himself so well and does such a good job … certainly shows the (possibilities) to young people and the capability that the Latino community has and the contributions that they’ve made to the greater community, not just Gates," Assini said. "He’s been a champion for the Latino community, showing the potential that exists in the Latino leadership."

During an anniversary trip to Puerto Rico several years ago with his wife, Elizabeth, Cordero learned that working on behalf of the community is part of his family lineage. His mother’s maiden name, Muñoz, appeared on several government buildings in San Juan, and he learned that her family was involved in civil service.

His parents, Secundino and Montserrate Cordero, had moved from their native Utuado, Puerto Rico, to California in the early 1950s and soon relocated to Rochester to be near his mother’s family who lived in the city.

Upon graduation from John Marshall High School in 1977, Cordero said he worked at Eastman Kodak Co., then drove an armored truck until he found a career with General Motors. He began on the assembly line and moved up over a 20-year period to eventually serve as union representative. During his tenure with the company, it changed hands from GM to ITT to Valeo and finally closed in 2008, he said.

Cordero had gained entrepreneurial experience running a NASCAR store on the side for 13 years after his wife lost her job at Chase Bank in 1996. So when Valeo closed, he decided to start his own landscaping business.

Longing for serenity, the couple decided to move from Rochester to one of the county’s western suburbs. They settled in Gates in 1988, Cordero said.

"I liked the hometown feel," he said of Gates. "We’re five minutes from anything, but still far enough away that it’s quiet."

Several years ago, friends encouraged him to get involved in a committee of the town government because he had expressed interest in learning about economic development. A couple of years later, he approached then-Town Supervisor Ralph Esposito about a position on the town planning board. Assini, who at the time was serving on the Monroe County Legislature, encouraged Cordero to pursue such an appointment.

In 2011, the town board appointed Cordero to a seat on the planning board. Serving in such a position tests a person’s responses to both constructive and angry criticism from residents and developers, Esposito said, noting that Cordero handled himself well.

While serving on the planning board, Cordero oversaw various projects and said he soon wanted more of a decision-making role in town government. He successfully ran for town board in November 2013 and took office in January 2014.

"I think he’s doing a very good job," Esposito said. "He’s doing things a councilman needs to do: Talking to members of the community. Finding out what their concerns are and expressing them on the board. Plus, he’s got a perfect job for it — landscaping, snowblowing — getting out and talking to the community."

Cordero also was successful campaigning for office because he is personable, Esposito added.

"He is a straight shooter," he remarked.

In addition to his business and town board duties, Cordero also is involved in a few local groups and cochairs an annual golf tournament to support the Breast Cancer Coalition of Rochester. Years after he began organizing the tournament, his sister was diagnosed with breast cancer, making his efforts even more personal, he added.

He said he is keeping an eye on the future and wouldn’t rule out a run for a higher office.

"You never know what tomorrow is going to bring," he said. "Someday, I might say I’m done with politics. (For now) I’m going to leave all the doors open. I never thought I’d be involved in politics. I’m not one for the camera. … It’s not about me, it’s about the issues."

If he runs for another office or for re-election, Cordero said he will campaign as he did in 2013, walking every neighborhood and talking to as many residents as possible, regardless of their party affiliations.