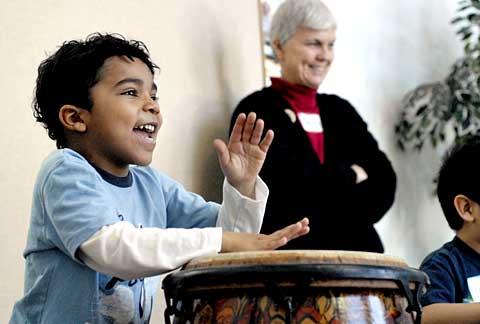 BROCKPORT — The nearly 40 children closed their eyes as three employees of the Brockport Migrant Education Outreach Program — each dressed as one of the Three Kings — tiptoed into the room at the Sweden Senior Center to surprise the group and help distribute gifts.

Those gifts ranged from stuffed animals and candy necklaces to board games and small race cars. Each child also received two books. Many of the toys were donated by individuals as well as by the Pirate Toy Fund and the Dollar Tree, said Irene Sanchez, who helped organize the party with Laura Mann, who is the Brockport program’s family educator. Sanchez had suggested the Three Kings theme because the group’s annual holiday party was being held Jan. 9, said Sister of St. Joseph Beverly Baker, director of the migrant program based at SUNY Brockport.

Other toys, such as those for older children, and all the books that were given as gifts were purchased by staff, Sister Baker said. The event also included an interactive African drumming presentation for the children and their parents as well as crafts and a lunch with traditional Mexican foods.

She said that her family also celebrates the Three Kings Day feast on Jan. 6 by buying a “Pan de Rosca,” which is baked with a miniature baby Jesus inside of it. The goal is to cut the piece with the baby in it. They also receive presents, Janet added.

The children attended the party while their parents participated in a monthly parent meeting in a separate area of the senior center. Those meetings offer education and support on such topics as helping children with homework and first aid, Sister Baker said.

For this meeting, the staff also was looking for four or five volunteers to be part of the Parent Advisory Committee and offer feedback and input for the program, she added.

Raquel Acevedo, who brought her three grandchildren to the party, said that it is important for parents to get involved in the program.

“I’m really grateful to the program for all they do for parents advocating for us and letting us know our rights,” she said. “That’s very important.”