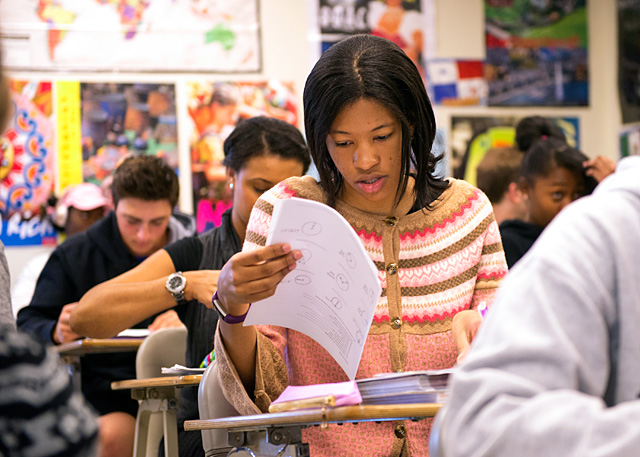 Kari Cepero is a teen author who had written the first book in her planed three-part series.

Kari Cepero is not your average teenager.

The 16-year-old Rochester resident doesn’t use Snapchat or Twitter. She doesn’t even own a cell phone.

But Kari has written and published a book — the first one of a three-part series that she is working to complete, she said during an Aug. 16 interview. The homeschooler began her writing career at age 3 or 4 when she wrote and illustrated stories about anamorphic animals, said her mother, Nannett Cepero.

"As I got older, my interests changed, my drawing skills got better and my writing got better and I started writing other things," Kari said. "But I stayed in the science fiction area. That was always something that I liked to do. … Science fiction is a great way to show creativity."

The series is called Keeper of the Stars and is set on another planet, Kari explained. The main characters in Dark Shadows, the first installment, are wolves, she said. She even made up the language they speak, also something she did with all her stories even from a young age, Kari said. Inventing a language is another extension of her creativity, she added.

The story "is not your typical fantasy," Kari said. "It’s very suspenseful, and there’s a twist in the plot."

Kari said the writing process for the first book took about two years. She began by creating a story board for the books and then got to writing.

Once complete, Kari said editing the first book took a few months with the help of a couple of editors, one of whom works with her father, Fernan Cepero, at the YMCA of Greater Rochester.

The editing process "was not that difficult," she said. "I got mostly good feedback."

Last January, Digital Diversity published the book, which is available at ourcreativejourneys.com. Kari has sold more than 25 books and even signed copies at Books Etc. in Mendon last July, her father said. The family is working on scheduling another book signing in October, he added.

In the meantime, Kari is not resting on her laurels. As soon as the first book was set, she began writing the second and third books simultaneously, which she said she liked.

"If I’m having writer’s block with one, I can skip over and work on the other one," she said.

Working on the books covers the English portion of her homeschooling curriculum, as does reading such literary classics as Fahrenheit 451 by Ray Bradbury or books by H.G. Wells.

"I also like reading fairy books from other cultures, which inspired me to write this book," she added. "It has an oldish feel and brought up images of sitting by a campfire (telling) an old story."

Nannett Cepero also has introduced her daughter to several languages, including French, Japanese and Dutch. The latter was to prepare for living abroad in the Netherlands a couple of years ago, but the family had to cancel those plans because of a health matter, Nannett Cepero explained.

"I really wanted to give her more of a college life experience early," Nannett Cepero added. "So when she does move into the college atmosphere, she knows how to think cognitively."

Homeschooling also has allowed for Nannett Cepero to bring Kari along to conferences in her field of ethno-botany, which is the scientific study of the traditional knowledge and customs of a people concerning plants and their use in medicine and religion.

"She’s grown up going with me to many organic farm conferences," Nannett Cepero said. "I have pictures of her as a baby when I was lecturing people about organic practices. She’s been there from the day she was born. She has been immersed in that culture and in that area. … From that, she’s met people from all over world."

Kari has used her knowledge of botany to lead sessions on sustainability and healthy eating for local Girl Scout troops and a summer program offered by Ibero-American Action League.

"Unlike other 16 year olds, she sits in conferences and lectures and she pretty much can teach the basics of it (botany), which she has done," her mother remarked.

Her Ibero presentations began when Kari brought the idea for them to Hilda Rosario Escher, the agency’s executive director and CEO, two years ago.

"I was completely taken aback," Rosario Escher said. "She is smart. She is determined."

She feels privileged to know Kari, she added.

"She is one of our future leaders, … someone who we need to watch and encourage and be there to support her," said Rosario Escher.

Right now, Kari said she is not sure if her future will include writing more books once she finishes her series. She will, however, get her first taste of college this fall by taking courses in French and photography at Monroe Community College. She is hoping that in the future she can combine her love of photography and writing in creating food blog, she added.