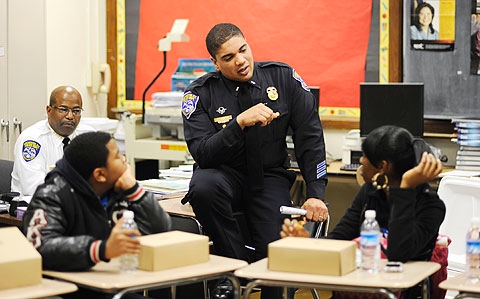 ROCHESTER — DaJon Humphrey is a college graduate who moved back to his native western New York to find a career making a difference in the community.

He lives in downtown Rochester, and a few months ago found himself held at gunpoint by Rochester police as he walked around his neighborhood, Humphrey explained. He said that he matched the description of a suspect that police were alerted to from a call they had received. While police explained their actions as procedural, he felt as if an apology was warranted for their actions, he added.

Seeing how upset Humphrey was by the incident, his boss at Threshold Center suggested he do something constructive with his feelings about the experience, Humphrey said.

So last month, Threshold and several other organizations — including the Metro Council for Teen Potential and the Center for Teen Empowerment — organized a first-ever Youth Summit to bring together city youths and officers from the Rochester Police Department, said Humphrey, a CAPP program assistant. Threshold at the Community Place provides health care, substance-abuse prevention services and job-readiness training, and its CAPP program focuses on comprehensive adolescent pregnancy prevention, said Nancy Sung Shelton, the program coordinator.

The summit, which focused on personal conversations between city youths and police, was held Dec. 15 at Benjamin Franklin High School, where Threshold operates a health center.

Chief James Sheppard said that Humphrey’s initiative also jibed with the department’s recent outreach efforts, notably "Chief on the Streets" to improve the interaction between police and the community.

"This is a great opportunity to engage with the youth," Sheppard added. "A lot of people come to me and say that the relationship with police and kids is terrible."

Sheppard remarked that this adversarial attitude is a challenge police have faced since he began his career in 1981. But he was encouraged by Humphrey’s invitation to join forces and hold a summit, which he hopes other community groups will be inspired to replicate, he said.

Having police hear from kids about how they feel and having students hear about how police do their jobs will be the summit’s biggest success, Sheppard noted.

"With that understanding, good things will happen," he said.

Kiara Santana, a seventh-grader at School of the Arts, agreed that it’s beneficial for teenagers to hear this message from police officers.

"Once you get to know cops, you see they’re doing to right thing," she said. "They’re trying to protect you and trying to get you to go along with the law."

The event also included poetry readings by students, skits, and a step and hip-hop dance performance by Sacred Expressions. The latter’s performance included a spoken-word segment where Michelle Nelson said "God will fight for us" as the dancers put their fists up in the air.

Nelson, a pastor with Bible Way Healing Assembly, said that the dance troupe, led by Di’ta Monique, is a collaboration with the city’s In-Control adolescent program, which provides youth development and neighborhood outreach.

She also agreed with Sheppard’s assessment that the rapport between city youths and police officers needs improvement.

"It’s good to … see where everybody is coming from," added Nelson, a mother of a 19-year-old son and an 8-year-old daughter. "Young people should know that (police) care about them."

Following the summit’s talent portion, the students split up into small groups and each group was assigned a police officer. In classrooms scattered across two of Franklin’s hallways, the students were asked a series of questions to reflect on their own experiences with the police department, and the officers responded to comments as well. The questions revolved around such issues as response times for calls to police and how police handle situations on the street.

"When you come up and approach me and I don’t want to talk to you and continue on my way, can you put cuffs on me?" asked Dean Lawrence, a member of Teen Empowerment, which hires youths in the southwest area of Rochester to analyze neighborhood issues and offer strategies to resolve them.

Officer Garth Mitchell explained that if a person has his hands in his pockets and is uncooperative and police have responded to shots in that area, for example, it’s difficult for the officers to assess the person’s intentions. But getting a handle on such tricky situations comes with experience, added Mitchell, who has worked for Rochester Police Department for 22 years.

"When you get in a conversation with police, just respond," he implored. "If you are respectful, I’m going to be respectful. It’s a back and forth."

Teen Empowerment has been engaged in turning around the disrespect felt by youths and police officers for several years, according to a Rochester Institute of Technology report at The Rochester Area Community Foundation and the United Way of Rochester also joined forces last year to advocate for juvenile justice after research revealed that Rochester had more youth detentions that Erie and Onondaga counties combined, and the recidivism rates of youths who are incarcerated is 80 percent, according to information at www.actrochester.org/Data/Documents/ACT%20Rochester%20Juvenile%20Justice%20and%20Youth%20Violence%20JUNE%202011%20FINAL.pdf.

Humphrey said that he hopes the youth summit will inspire other community agencies to take on similar summits not only across the city but the region and state as well.

He added that his goal in his job at Threshold also is to expand the vision city students have for their future, which he said could include law enforcement careers. As a high-school student in Albion, he explained that conversations among his classmates often focused on where, not if, they were going to attend college. As a graduate of Ohio’s Central State University with a bachelor’s degree in mass communications, Humphrey said that he is frustrated that the city’s high-school graduation rate remains so stagnant.

"I want to reinvigorate, rejuvenate their dreams," he said of city youths. "They don’t see beyond Rochester. I wish they could see through my eyes."