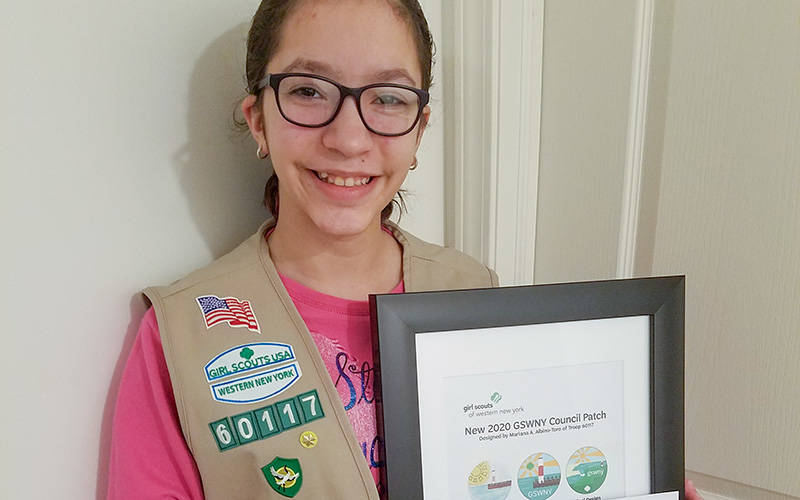 Cherished childhood memories of walking along Charlotte Beach inspired a local Girl Scout to create a design for a patch that was chosen to symbolize her council’s nine-county region.

The 2020 Council Patch Contest was announced in the summer of 2020. After learning about the competition, and with the encouragement of her family, 12-year-old Mariana A. Albino-Toro, a sixth-grader at Sherman Elementary School in Henrietta and a Cadette in Troop 60117, decided to submit a patch design.

Mariana said her sister helped to inspire her as she created her design, which was one of 70 hand-drawn entries from throughout GSWNY’s nine counties. Mariana said she went through a couple of drafts with her sister before submitting a final design featuring the lighthouse in Charlotte that her family used to visit as part of their summer traditions. Those traditions also included Mariana eating cheeseburgers and ice cream with her siblings at Jetty at the Port in Rochester.

News that Mariana’s design had been selected came in early September 2020, with the patch being available to purchase through local shops for $2 shortly after.

“My face hurt from smiling,” Mariana said about receiving the phone call that notified her she had won.

“Her sister and I were so proud of her when we heard she had won,” said Yesenia Albino, Mariana’s mother.

As the winner of the contest, Mariana was given a framed print of her design in addition to the physical patch to be added to her uniform, a GSWNY gift card and a personal congratulatory call from the council’s CEO. The final patch design features landmarks across western New York, including Mariana’s favorite spot in Rochester, Charlotte Pier.

Both Mariana and her mother have been actively involved in Girl Scouting since Troop 60117 was first created five years ago. According to Albino, who serves as coleader, Marlene Cortez, a parent in her daughter’s school district at the time, founded the troop.

Although Albino had never heard of the Girl Scouts, Cortez convinced her not only to enroll her daughter in the program but also to help as a parent volunteer.

“I was never a Girl Scout, I didn’t know what Girl Scouts was about or what they did. … I was surprised to learn the program helped young girls grow, interact with one another, and the values aligned with what I would want for my daughter,” Albino said. “The overall experience, education and community support Mariana has gotten since joining the Girl Scouts is awesome.”

That became apparent two years ago, recalled Albino, when members of the community, including Girl Scout leaders and parents, came together to help the family after its members lost most of their belongings in a house fire.

“The girls especially were able to see this is what the Girl Scouts is about, we support each other in good times and in bad times,” said Albino.

“They (GSWNY) even replaced my uniform and all the badges I had previously earned and lost,” Mariana added.

Even with the ongoing pandemic, Mariana’s troop is still meeting every other week using Zoom or Google Calls.

“Our troop leader is even providing us with kits filled with what we need,” said Mariana, noting that the kits contain materials needed to complete lessons in between meetings so the girls can continue to earn badges.

“My involvement has been supporting her, seeing her grow while enjoying and interacting with her friends as a Girl Scout,” said Albino, adding that Mariana has been working on earning her democracy badge by learning about how a bill is formed, the process of voting, and historical and current political figures such as Kamala Harris.

Despite missing in-person interactions with her fellow Scouts, Mariana said she continues to enjoy being a Girl Scout and will carry on with scouting.