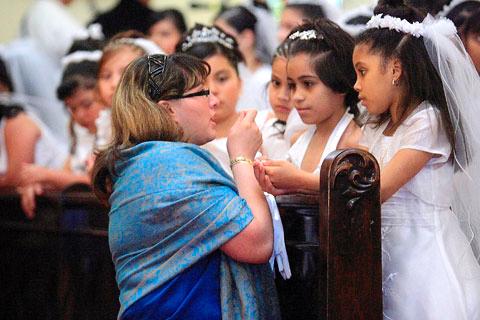 WASHINGTON — A major study of the values, circumstances and aspirations of Latino youths paints a portrait of optimism and enthusiasm in the face of significant struggles, including inadequate education, problems with their immigration status and high rates of poverty.

The study by the Pew Hispanic Center released Dec. 11 highlights many similarities between the way previous generations of immigrants and recent Latino immigrants and their children become a part of American society. And it notes that Hispanic cultural traditions of close family ties, religious faith and hard work remain strong even several generations after a family resettles in the United States.

“Between Two Worlds: How Young Latinos Come of Age in America” reported on a national survey sample of more than 2,000 Hispanics questioned in August and September.

One particularly pervasive problem faced by Latino youths more so than other demographic groups, the survey reported, is that they are much more likely to become involved with weapons, fights and gangs, and more likely to land in jail or prison.

First-generation and second-generation offspring of Hispanic immigrants in particular are more likely than immigrants themselves to have been in fights or have friends or family members who are in a gang, the Pew report said.

One factor for that, the study suggested, is that immigrants tend to be more involved with their churches than do later generation Latinos. And “young Hispanics who are highly religious are significantly less likely than others to engage in risky behaviors,” it said.

Forty-one percent of immigrant Latinos said they attend religious services weekly, compared to 31 percent of those born in the United States. Among both immigrants and U.S.-born Latino youths, those who attend church regularly were only half as likely to report being threatened with a weapon in the previous year — 5 percent — compared to their peers who are less religiously involved — 12 percent, it said.

Among some of the other findings in the 100-page report:

The report was drawn from National Survey of Latinos and an oversample of 1,240 Hispanics between the ages of 16 and 25, interviewed for the Pew Hispanic Center by Social Science Research Solutions.