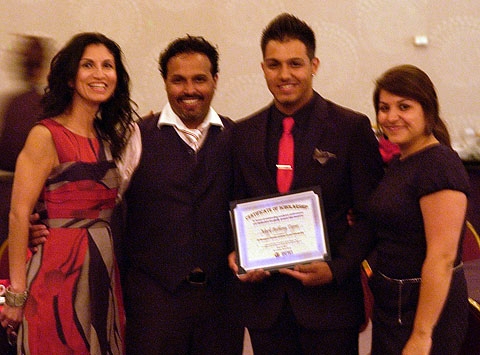 ROCHESTER — Luis Rodríguez came to the United States from his native Puerto Rico as a fourth-grader who barely knew a word of English.

And this month, he graduates as valedictorian of his class at John Marshall High School and will head to St. John Fisher College this fall on a full scholarship. He was one of nine area students to receive the inaugural "First in Family" scholarships from the Max and Marian Farash Charitable Foundation, Luis said.

Luis and 36 other high-school students were honored June 9 during the 17th-annual Ibero-American Action League’s Gala and Hispanic Scholarship Recognition Awards at the Hyatt Regency Hotel attended by more than 400 people.

In his keynote address, Danny Wegman, chief executive officer of Wegmans Food Markets, spoke about the success of the company’s Hillside-Work Scholarship Connection.

"Kids need responsibility; someone who holds them (accountable)," he noted. "And they will do a good job."

The scholarships that Ibero presents to students during the gala are funded by individuals, community agencies and groups, colleges and universities, and the agency’s Hispanic Scholarship Endowment Fund. Judges consider such criteria as standardized testing scores, grade-point averages, extracurricular activities, letters of recommendation and a short essay in selecting scholarship recipients, explained Grace Tillinghast, who heads the scholarship committee.

When Luis received the news about the Farash scholarship, his family was ecstatic, he said.

And because his family moved to Rochester to give Luis and his two younger siblings a better life, he now has a chance to make his parents proud, he added.

"Everything’s been coming along thanks to them moving here and opening doors for me," he remarked.

While the economy continues to pose challenges for the scholarship committee, the program continues to grow, noted Tillinghast. The tally for the number of scholarships awarded to the students recognized during the ceremony totaled $2.6 million, she announced at the end of the gala.

"We do have a lot of success stories," said Tillinghast, the Rochester Hispanic Business Association chair who was recently appointed chair of the Arts and Cultural Council for Greater Rochester.

Tillinghast said that she had an important message for all the students gathered before her at the gala — especially after learning that some of the past Ibero scholars had not shown up for classes or dropped out of college last year. She hopes they are the exceptions, Tillinghast remarked.

"Apply yourselves," she implored. "Make yourself, your family and your community proud."

Ruth López that said she is extremely grateful for the $2,500 scholarship that she received from Excellus. Her father is a licensed practical nurse so the family’s finances are tight, she noted.

A native of the Dominican Republic who came to the United States as a 6-year-old, López said that she will major in pre-medicine at SUNY Brockport.

"My plans for the future are to become a cardiologist," she explained. "I hope to someday return to Rochester and start an outreach program for under-represented minority students, like myself, looking to pursue a higher education. … I am extremely thankful to Ibero and the support they have given me in and out of school."

Mark Anthony Torres, who is this year’s recipient of the second-annual El Mensajero Católico scholarship, said that Ibero’s gala offers the students the opportunity to show their appreciation and pride at being one of the Ibero scholars.

"I’m really excited," he said. "I think it (gala) is great — promoting the Hispanic culture and making sure we do (well) in the future."