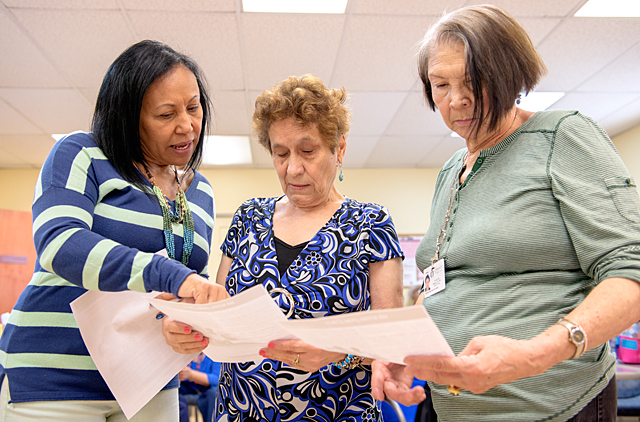 New York state is looking to keep more senior citizens in their homes as long as possible as a cost-saving measure. This shift aligns with values that Latino families have maintained as they strive to care for their elderly family members at home.

While cultural factors are at the heart of the Latino approach to elder care, local experts said New York’s goal is to save money on nursing home costs, which are largely paid by the state’s Medicaid insurance program.

Medicaid is a federal and state insurance program for people with low incomes. In 2013-14, the program served nearly 5.7 million people, or about 29 percent of the state’s population. Services for aged and disabled people represented approximately 60 percent of Medicaid expenditures by the state Department of Health, at an average cost in 2013 of more than $22,000 per recipient, according to the state comptroller’s office whose report can be found at http://bit.ly/1T6MIQu. The report called the health-care system in New York the most expensive of all states in a country that has the most expensive health-care system in the world.

Susan Murty, vice president and administrator at St. Ann’s Community in Rochester, noted that Medicaid currently pays for more than 75 percent of nursing home beds in the state. So, a Medicaid redesign team is looking at how the state can control nursing home costs by providing long-term medical coverage through a centralized system that allows senior citizens to stay home whenever feasible, she added.

"The idea is to try and divert people (from) living in nursing homes as long as possible," Murty said.

One idea being considered as part of the state Department of Health’s Medicaid redesign plan, which began in 2013, is an increase in adult day-care programs eligible for Medicaid reimbursement.

Boosting the availability of coverage for day programs would provide relief to families who want to care for their elderly parents at home but cannot leave them unsupervised during work hours, Murty said. Day programs offer a safe alternative and peace of mind for families in those kinds of situations, she noted.

There are two types of adult day-care programs — medical and social. According to information from the U.S. Department of Health (http://1.usa.gov/1VKr70M), the medical model provides supervision, monitoring and preventive, diagnostic, therapeutic, rehabilitative or palliative care or services. The social model provides socialization/therapeutic recreation, supervision and monitoring, and personal care/assistance with activities of daily living and nutrition.

Medicaid currently covers the cost of medical programs, Murty noted, leaving families alone to shoulder the cost of social programs. But that could change under the redesign model, she said.

"Payers are catching up with what we see we need in the home," she said. "If you can provide support at home, people will always continue to want to stay at home."

Day programs are a godsend for many people, said Murty, noting that St. Ann’s provides both models. "And they are a lot cheaper to pay for than nursing homes."

Latino families in the area have long taken advantage of such day-care options as they strive to keep their parents out of nursing homes, Murty remarked. Such programs offer several advantages, noted Eileen Ryan-Maruke, St. Ann’s vice president of marketing and community relations.

"Mom is safe. She meets a lot of other people and friends coming to a social day program. She gets a hot meal," Ryan-Maruke said. "So many things are wrapped up in a program. It’s not just a place to go. It’s socialization. You get what (you) need and at the end of day, you come back home."

"The centro is the only thing in the community dedicated to our Latino seniors," she said.

Yet since Centro de Oro is not a medical model, the program is limited to serving seniors who are in general good health or in the initial stages of dementia, said DeJesús. Because it does not receive any state funding, the center operates with volunteers and grant funding, and even the coordinator is a part-time position, she said.

"We would love to see increased funding to expand the Centro de Oro to meet the needs of seniors when they require more specialized and one-to-one care," DeJesús added. "Right now, we (only) have capacity for more seniors who are more independent."

DeJesús explained that when participants become unable to feed themselves or take care of their own bathroom needs, the center’s coordinator, Eloiza Rivera, refers their caregivers to such other community resources as ElderONE. Formerly known as Independent Living for Seniors, ElderONE offers a "Program of All-Inclusive Care for the Elderly" that provides medical care and support services for seniors in their homes, the community and at the ElderONE (PACE) Day Center, according to information at http://bit.ly/1T1ZgbR.

But Spanish-speaking or culturally trained staff is not always available at such programs, noted DeJesús.

"There are not enough of these (day) programs in the community" for Latino seniors, she said.