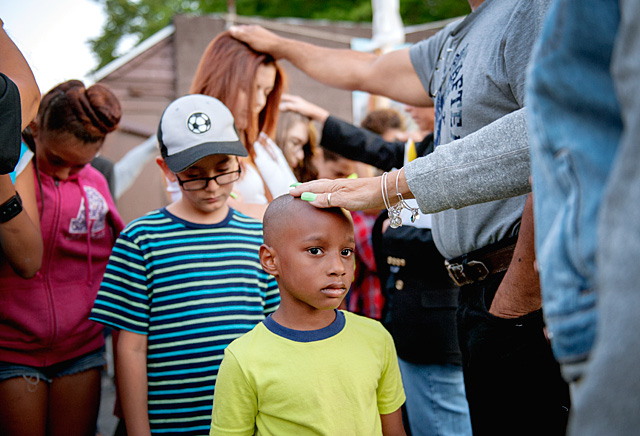 ROCHESTER — Be firm and steadfast.

Those were words of advice to the young parishioners before José Juan Valdez, who served as the preacher for the annual Santa Misión held Aug. 10-12 at Holy Apostles Church. On the final night, which was planned and led by young parishioners, he encouraged them to go back to their parishes and find leadership opportunities.

And to the adults gathered before him in the church parking lot, he recommended that they let the youths lead.

As Valdez spoke, he jokingly apologized for his English, as it is his second language, having been born in Guanajuato, Mexico. But knowing that most young Hispanic people speak English sprinkled with some Spanish, he also spoke "Spanglish." Valdez is currently director of adult formation at St. Luke the Evangelist Church in Houston, Texas, and national young-adult coordinator with the Hispanic Catholic Charismatic Renewal. Valdez said that he has been involved in the Catholic charismatic movement for many years.

His energy and sincerity resonated not only with the youths but with the adults throughout the mission, said Elizabeth Johnston, intercultural specialist with the Diocese of Rochester, who helped plan the mission.

Part of that planning included having parishioners host a pre-mission gathering to prepare for the message they would receive and then reflect on the message after the mission, she explained.

And while people have related to Valdez on a personal level because he’s a married father of three, he also has a great knowledge of Scripture and the church, having been in seminary for 11 years.

"The great thing about him is he brings a lot of personal witness," she said.

During the mission, Valdez said that he felt the call to lead at the age of 11. And thanks to a kind woman in his parish in his native Mexico, he trained to be a catechist. He joked that she was crazy, but she supported his desire to lead instead of chastising him for being too young to do so.

"Believe in the youth," Valdez urged. "Help them find Jesus."

Valdez said that the entire community must work together to bring young people back to church as the secularization of American society continues. He advised them to not be like the Israelites as Moses led them out of Egypt and just complain about their situation.

It is better to be like Moses, who trained Joshua to become the people’s next leader and allowed him to take the reins, Valdez explained.

"We have to start now. Tomorrow could be late. They could be introduced to drugs or some other thing," he said. "A good leader forms leaders. Moses chose Joshua. … You’ve got to trust the youth."

Thalia Frometa was one of the young parishioners who was trusted to help plan the mission’s last night. She said that the youth planning committee worked very hard to plan all the prayers and rehearse the liturgical dances they presented during the mission. And she felt proud at how well their prayers and activities were received, the 14-year-old parishioner of Our Lady of the Americas Church added.

"The Holy Spirit got into everybody," she said, adding that she hopes more young people are inspired to come to church.

Kidani Malik, who served as a lector during the mission’s youth night, said that even the music selected for the evening could help attract more people.

"And just having kids (lead) will help … to attract more kids," he said.

He also was glad that Valdez asked the adults to let the youths take on more responsibility in their parishes, added Kidani, 14, a Holy Apostles parishioner.

"This was a good experience," he said of the mission. "I loved everything that happened."