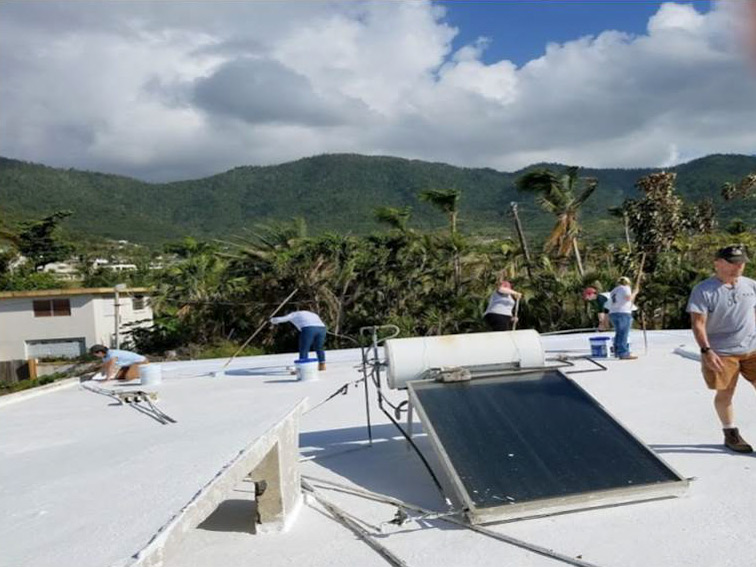 The local response to Hurricane Maria’s effect on Puerto Rico goes beyond helping resettle thousands of displaced families in Rochester.

Service trips by groups have brought in needed supplies and assistance in rebuilding the island, and a 5K race featuring international boxing champions is being planned to support a center that serves children with cancer.

Mercedes Vázquez Simmons, who has made several trips to Puerto Rico in the last six months, is coordinating the race in Caguas to take place in July. The owner of Pretty Girl Productions, a boxing promotion company, she also owns a training facility in Vieques that opened only weeks before the hurricane.

She said the facility was not only unaffected by the hurricane, but she was able to open it up for use as a temporary shelter.

“I was glad it became a blessing to other people,” said Vázquez Simmons.

She is hoping the race will attract 2,000 participants and reach a fundraising goal of $80,000 to repair a home designated for children who are undergoing chemotherapy, she said.

“It was completely ruined because of the hurricane, and they get no (government) funding,” she said.
Formerly with Time Warner Cable, Vázquez Simmons also is part of a task force working on the island’s technology infrastructure. Too many Band-Aid fixes right after Hurricane Maria make the island vulnerable to communication disruptions as another hurricane season begins, she said.

For example, one couple in their 90s who live in a mountainous area had no way to reach family in Rochester even in March, so Vázquez Simmons sought them out during one of her trips to Puerto Rico this spring and found them running a generator with propane.

“I’m convinced every Puerto Rican is an engineer,” she joked.

When Vázquez Simmons was able to connect the couple with the husband’s elderly sister in Rochester, everyone was in tears as the couple recounted holding hands during the hurricane, believing they would not survive, she said.

“It broke my heart,” she said.

Also heartbreaking is the number properties around the island that are being bought up by investors, and fear abounds that poor people who don’t have the means to leave the island will have nowhere to go, said Vázquez Simmons.

Even before Hurricane Maria hit, Puerto Ricans were being displaced because of the island’s commonwealth status, said Aurora Santiago, a doctoral student on social education at the University of Amherst, Mass.

Santiago spoke about Puerto Rico via Skype during a May 2 presentation hosted by the Rochester Committee on Latin America (ROCLA) at the Downtown United Presbyterian Church.

The island had been battling a financial crisis for years made worse by U.S. controls, which prevented it from declaring bankruptcy while imposing a fiscal control board and austerity measures, she explained. With high unemployment, many people had already started leaving the island before the hurricane, she said.

“The hurricane exacerbated existing issues that were the product of colonialism, mismanagement, corruption,” Santiago said. “You could see the disparity of help people got (in Texas) after (Hurricane) Harvey than what the people in Puerto Rico got after (Hurricane Maria).”

Not having self-determination means that much of the reconstruction work depends on decisions made outside the island, she explained, which is why recovery has been so slow.

Instead of waiting, people have been spurred to organize collectively in a localized way, Santiago said. For example, they have worked with mutual aid organizations to provide immediate services for themselves, from communal kitchens to power restoration.

“I see it as an act of resistance,” she added.

Providing aid for these communities has been the focus of two recent trips by students and staff from SUNY Geneseo, Betsy Colón explained during the ROCLA presentation.

The trips are coordinated by Livingston Cares, a community organization based at SUNY Geneseo that was formed in response to Hurricane Katrina and has provided service to hurricane-affected communities since 2005, she noted.

After Hurricane Maria, the organization found partners on the island, including the United Methodist Church of Puerto Rico, to get a group there as soon as possible and provide assistance where it was most needed, said Colón.

Colón, who works in SUNY Geneseo’s grants management office, said she jumped at the chance to go on the March trip to Patillas with seven Geneseo students, since her parents still live on the island. Students paid for their own travel expenses, while Livingston Cares provided liability insurance coverage as well as transportation around Puerto Rico.

“The aftermath … is still very visible in Patillas,” she said of the hurricane’s devastation. “It was hard to see this for many of us, but everyone was incredibly grateful to have the opportunity to be there.”

The group encountered downed power lines, roof debris from metal to cement that had been torn off during the hurricane, and impromptu landfills teeming with moldy mattresses and clothing. To help out, the group cleared debris, painted white sealant paint on roofs, poured cement roofs and dug a 250-foot drainage trench.

One family was still cooking outside while their home was repaired, Colón remarked. Electrical transformers were delivered to the mountainous area by helicopter, illustrating the complexity of the recovery, she noted. Areas in Patillas went without electricity until May.

“People learn to survive with their situations,” she said. “To this day, when I hear a helicopter, I pray for Puerto Rico.”

A second group went in May, and another trip is already in the works, Colón added.

“Of course, we felt like we didn’t do enough. … (The work) was endless, Colón said. “It was a beautiful experience. While it’s hard to see people suffer, we all recognized that by talking with them and being with them, you share each other’s burdens as the Bible tells us to. … That’s part of our faith.”