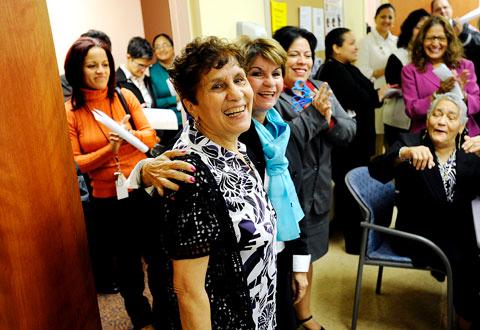 ROCHESTER — El Centro de Oro has had the golden touch for Ramón Rivera in more ways than one.

The Puerto Rico native, who returned to Rochester three years ago after living back on the island for many years, became a member of Ibero-American Action League’s center for Hispanic senior citizens at his daughter’s suggestion. Upon participating in the center’s activities, he was soon introduced to Luci Rodríguez, and the rest, as they say, is history. The couple was even married at the center two years ago.

"It’s very comfortable," Rivera said of the center. "I would encourage all elderly people … to come to the center."

Rivera recounted his story during a ribbon-cutting ceremony held Nov. 5 to celebrate the opening of the center’s new location at 817 E. Main St. Through a $36,000 grant from the Rochester Primary Care Network (RPCN), Ibero was able to renovate former office space to accommodate the center on the building’s main floor. The renovations included making the center wheelchair accessible for senior citizens with disabilities and creating television lounges and a separate game room for bingo and dominoes.

"Now, they watch their soap operas in whatever room they want," joked Eloiza Rivera, the center’s coordinator. "Everyone has his or her own space. Everybody’s happy."

Without the RCPN grant, the move would not have been possible, said Hilda Rosario Escher, Ibero’s president and chief executive officer. Monroe County’s Office for the Aging also provides funding for the center’s services for Hispanic senior citizens age 60 and older.

More than 100 seniors are registered at the center, and about 50 to 60 partake of the daily activities, which include: nutritious, traditional Hispanic dishes and cooking demonstrations; computer, exercise and English classes; blood-pressure checks; and counseling. The center also has a partnership with Nazareth College, which sends a nurse volunteer once a week to assist with its wellness program. The center also has a driver to provide transportation for the seniors.

By making the move, Ibero was able to expand and enhance the offerings that were available at the former location in the Jorge Cólon Carrión Family Center at 777 Clifford Ave., said Elisa DeJesus, Ibero’s vice president of family services. The additional space in the new center also will allow for the continued growth of the older Hispanic population, she added.

According to Center for Governmental Research information at www.cgr.org/reports/07_R-1510_DemographicAnalysisofSeniors.pdf , the population of Hispanics in Monroe County who are 60 or older is expected to grow about 18 percent from 2006 to 2011.

"The program is growing, and we have plans and goals to continue serving our senior population," DeJesus remarked. "Now that we are here, we are able to welcome many more seniors."

El Centro de Oro began at Los Flamboyanes apartments on North Clinton Avenue two decades ago and is one of the oldest programs Ibero offers. Ivette Salgado, RCPN’s board chairwoman, said that she remembers those early days at Los Flamboyanes with her father, Julio Díaz.

"This is our goal at the Rochester Primary Care Network, to provide services to the community, especially the indigent, which many of our seniors are," Salgado said. "They need something like this. … This is great."

Carmen Ortiz of Rochester, who has come to the center for the past even years, said that the center helps keep senior citizens from feeling lonely or depressed.

"We entertain each other," she said. "Depression leaves us. … It’s good because I don’t want to stay home. The house is depressing, especially when you’re alone."