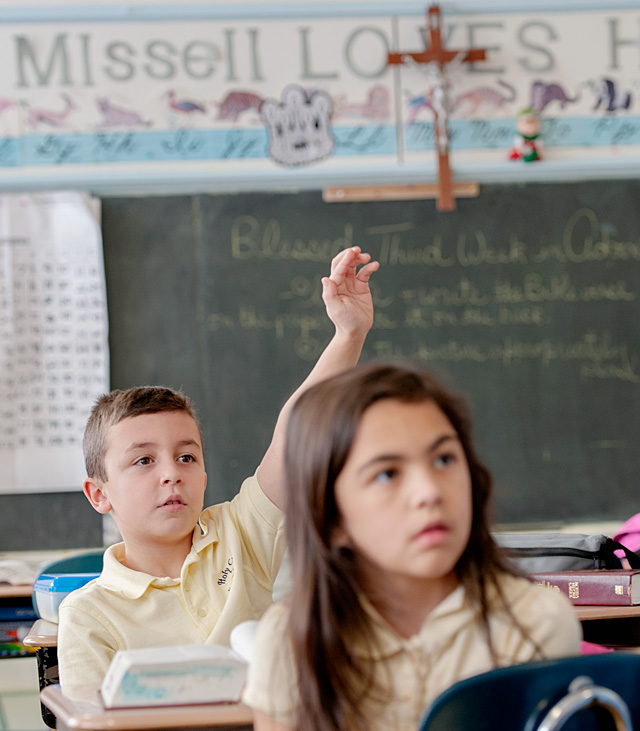 With numerous anti-bullying posters marking its halls, Holy Cross School in Rochester’s Charlotte neighborhood is out to make a clear statement.

That message is driven home inside the classrooms as well, through weekly discussions about bullying prevention.

On the morning of Dec. 16, Annmarie Missell’s fourth-grade class was full of spirited banter as they discussed ways to treat people more kindly, noted the difference between bullying and teasing, and reviewed how to respond to a bullying incident either as a victim or bystander.

Such efforts at Holy Cross are outgrowths of the Olweus Bullying Prevention Program, which is being implemented in all diocesan schools during the 2013-14 school year. The initiative is taking place at the behest of first-year superintendent Anthony Cook, who considers Olweus the leading initiative available for reducing incidents of bullying and achieving stronger social awareness.

Cook said the Olweus approach blends in naturally with the faith- and values-based atmosphere of Catholic schools, emphasizing mutual love, respect, support and inclusiveness. Although he emphasized that "bullying has not been a prevalent issue in our schools," Cook and several principals interviewed for this story agreed that bullying can occur in just about any setting, and so must be addressed in Catholic schools as well as in public ones.

"It kind of prepares for the way you’re going to talk to somebody in the real world," Cook said.

While the Rochester City School District uses a different anti-bullying program, the focus also is on promoting positive student characteristics, said Lori Baldwin, the district’s director of safety and security. Each school develops its own acronym for the five characteristics they identify as important, she explained.

"If we teach them that positive behavior and train them at an earlier age, they will blossom into a more respectful student and member of the community," she said. "We try to build the character within the curriculum of the school. … So, instead of saying, ‘Don’t bully,’ you’re teaching kids what they should do."

Focusing on four vital social environments — the community, school, classroom and individual — Olweus teaches staff, students of all grade levels and parents to be alert to possible bullying situations, intervene, report and follow up. The program is named after Dan Olweus, a Swedish psychologist whose research on bullying extends back to the early 1970s. It was launched in diocesan schools last summer with a goal of being fully implemented by Catholic Schools Week of 2014, which ran Jan. 26-Feb. 1.

Steps taken thus far have included training of school administrators and faculty; establishment of faculty teams; and completion of student surveys to help identify where, when and how bullying might be occurring in schools. The surveys produced valuable "hard data," according to Steve Oberst, principal of St Pius Tenth School in Chili.

Student discussions — such as the one among Holy Cross’ fourth-graders Dec. 16 — also have begun at several schools. During that discussion as part of Olweus’ focus on helping others, youngsters enthusiastically furnished ideas for "random acts of kindness."

"You could help them carry stuff," Desire Kasinge said.

"You could visit a nursing home," Colin Bavibidila added.

The youths became more somber as they recalled incidents when they were subjected to or witnessed teasing. This was an important dialogue since one of Olweus’ main thrusts is to distinguish teasing/kidding from bullying.

"It (bullying) has to be purposefully hurtful. It has to be repetitive or unwanted," Cook said. "Once a child tells another child they don’t like something and they continue to do it, that’s bullying."

Bullying, according to the Olweus website (www.violencepreventionworks.org), "is aggressive behavior that is intentional and that involves an imbalance of power. Most often, it is repeated over time." This behavior can be verbal, in the form of derogatory comments and name-calling; physical, such as hitting, kicking, shoving or spitting; or occur through social exclusion or isolation. It can be spreading lies and false rumors; damaging or taking possessions or money; or threatening or forcing the victim to do things. Bullying can be racial, sexual or technology-based in nature.

Olweus stresses that victims should report bullying to an adult, and that bystanders should do the same and also denounce the bullying behavior — as opposed to joining in or remaining silent out of fear of getting involved, being labeled a tattler, and/or becoming a target of the bully as well.

The city school district provides an online reporting form, which is accessible from the district’s website, http://rcsdk12.org, Baldwin said. The form, which can be submitted anonymously, is part of the district’s new anti-bullying initiative put into place at the start of the school year through the New York state education department’s "Dignity for All Students Act (DASA)," she said. Each school also has a DASA coordinator, to whom students can turn to in a bullying situation as well, Baldwin said. The coordinators then address such situations, she said.

"A lot of times, our kids are afraid," Baldwin remarked. "We want to open up paths so kid can say, ‘I’m being bullied.’"

However, those engaging in bullying are themselves in need of support and guidance, Cook pointed out, noting that young people, in particular, may not even realize when they’re bullying or "what effect it’s going to have on somebody else."

"We never label a kid a bully," Cook said. "We label the behavior they’re exhibiting, because behavior can be changed and it can be taught."

And just because somebody has bullied "doesn’t mean they’re a bad kid," Tobia added.

Tobia said these important points are much more likely to take root through the Olweus program because it’s continuous, as opposed to a one-time presentation.

However, Cook said, this lack of action-taking has in some cases produced tragic results as a result of bullying.

Oberst cited the 1999 massacre at Columbine High School — where students Eric Harris and Dylan Klebold killed 12 peers, a teacher and themselves, reportedly in response to a history of being bullied — as a turning point in bringing public discussion of bullying to the forefront.

Martell and Oberst added that vigilance in regard to bullying is even more vital in this era of social media, when messaging capability via texting, Facebook and the like have opened the door for cyberbullying — attacking others via computer, often anonymously, with hurtful words that can be circulated to a wide audience and are virtually impossible to completely eradicate.

Parents need to be vigilant in monitoring their children’s social media sites, Baldwin said, especially when cyberbullying incidents are occurring between students even at the elementary schools.

"Parents must understand that it does occur," she said of cyberbullying. "And their child may not only be recipient. But you want to make sure your child is not doing something to harm another child. We need parents to teach responsibility when their children are on Facebook, Twitter or any other social media site."