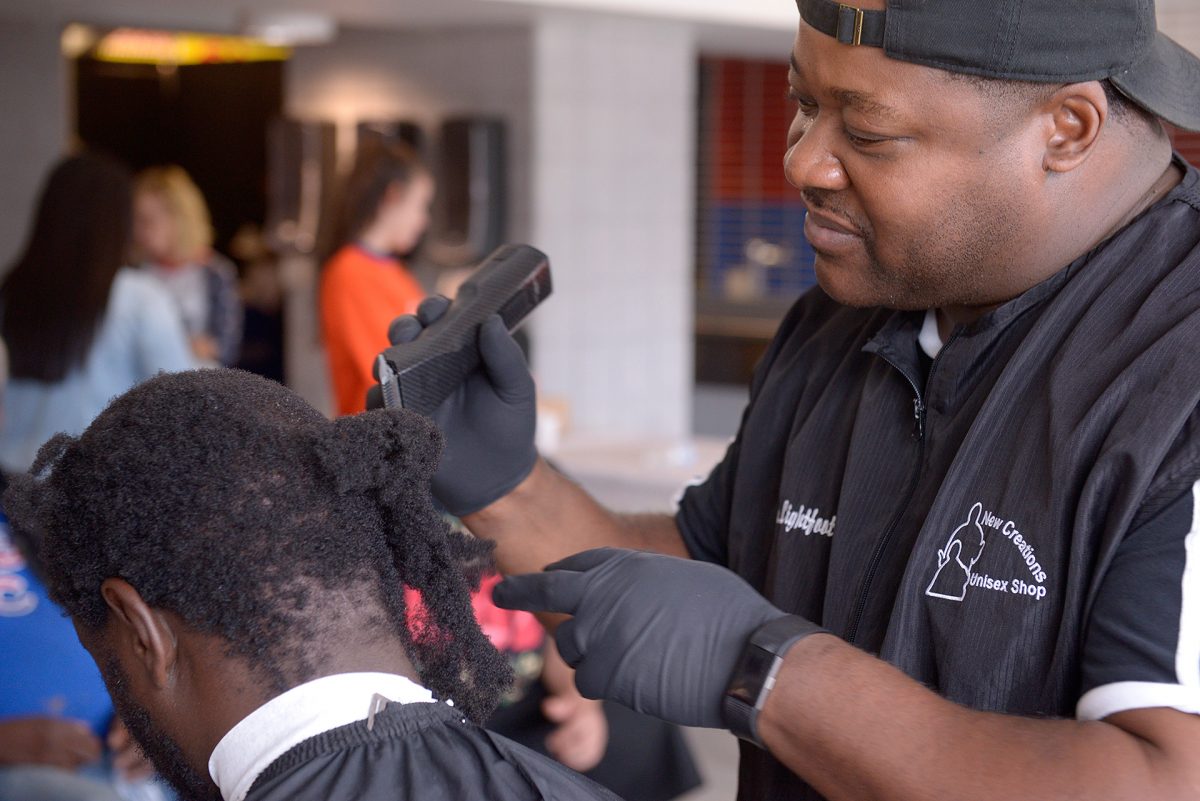 Willie Lightfoot cuts hair for people during the annual Project Homeless Connect Rochester on Sept. 13. at the Blue Cross Arena at the War Memorial.(EMC Photo by John Haeger)

ROCHESTER — More than 1,000 homeless residents received access to services under one roof earlier this fall.

In its ninth year, Project Homeless Connect offered a one-day, “one-stop shop” event Sept. 13 to help the homeless as well as individuals who are at risk of becoming homeless, explained Kathryn Bryan, senior vice president of property management for PathStone Corp. The event served 750 individuals last year, according to information from PathStone, a nonprofit community development and human services organization that is the lead agency for the multiagency collaboration.

“Having it all under one roof makes it easier to get to,” Bryan said of offering services at Blue Cross Arena Sept. 13. “For a homeless individual with no transportation, getting to an appointment can mean four different bus (rides).”

About 10 percent of the individuals who come to the annual fall event are veterans, she noted, while organizers saw a growing number of women and children this year, Bryan said. The project’s planning committee will spend time analyzing intake forms to determine the factors causing these changes, she said.

The numbers indicate the changing face of the homeless, which has been thought of by most people as older men dressed shabbily, added Jed Metzger, a professor of social work at Nazareth College.

“Although in general the U.S. economy is up, the situation for the poorest in our country has gotten worse,” he remarked.

Once complete, the Project Connect data analysis is passed on to service providers in the community, Metzger said.

“It (the data) provides a snapshot … (and) another data point for our community,” he noted.

For the past seven years, Nazareth’s undergraduate and graduate social work students have participated in Project Homeless Connect as well as members of the Spanish Club and students of social work from other colleges, he said. Additionally, about 100 service providers have offered such services as legal assistance, health and medical screenings, mental-health assessments, veteran services, housing services, haircuts, services for youths, substance-abuse recovery services, and employment information, Bryan said.

“We want people to come in and leave with (tasks) completed,” he explained.

One of the tasks for many people who come to the event is getting birth certifications or identification cards, she said. Monroe County and New York state Department of Motor Vehicles staff are on hand every year to assist with that process. Representatives from area shelters help individuals find shelter for that evening if needed, Bryan said.

“Everyone who walks in the door is treated with dignity and respect,” Bryan said. “Everyone gets an escort familiar with what services are available.”

About 1,200 volunteers have taken part in the event since it began in 2009 as a service project of several faith communities led by Temple B’rith Kodesh in Brighton, Bryan said. The project grew to be more than the group could handle with volunteers, which is when Nazareth was contacted and stepped in, Metzger noted.

Much planning time is spent visiting homeless shelters and service providers to assess needs and get the word out about the event, Metzger said.

“Everyone wants to assist and make things better for these folks,” Bryan said. “There’s a great sense of connectedness.”