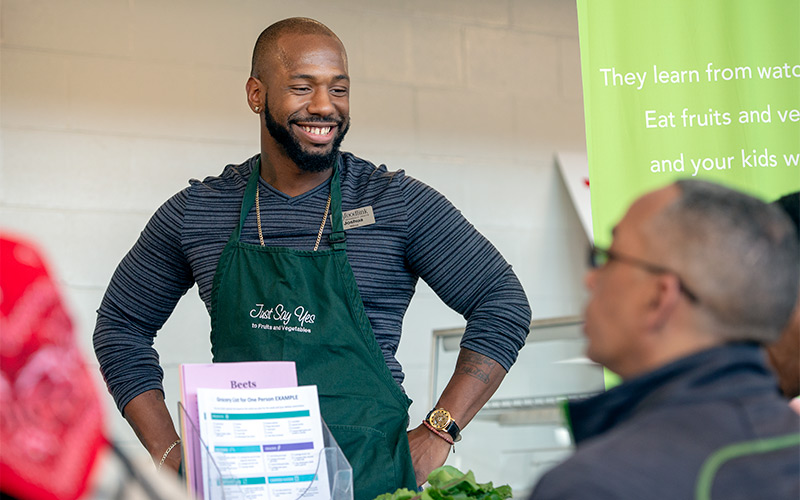 ROCHESTER — Twenty years ago, Pathways to Peace was created as a response to one of the worst crime sprees in Rochester’s history, perpetrated largely by young men, according to its founding members.

Formed as a violence prevention and response team, Pathways to Peace “was one of the initiatives we came up with to try and work with those young men to divert them away from the violence or keep them from being victims of violence,” former Mayor Bill Johnson told El Mensajero Católico June 29. Other programs included expanded recreation activities and job training and placement.

Current director Ray Mayoliz explained that Johnson, who was mayor at that time Pathways was created, hired a team of young people from the community who had different histories and experiences. These youths had overcome poverty and other obstacles and could serve as role models and mentors, he added. Mayoliz was one of those original team members, he said during a June 13 interview at the City of Rochester recreation offices.

The staff met with young people where they were in the community — on the streets, corner stores, outside schools, Mayoliz said. In those early years, they worked nontraditional hours.

“They were youth workers,” Johnson said. “They were not at a desk but spent time out on the streets, engaging with young people, intervening and trying to divert them from physical harm and the long-term consequences for bad behavior.”

This engagement gave Pathways staff credibility, which paved the way to building trusting relationships with the most high at-risk youth, Mayoliz said.

Josh Wilcox, who told his story during a Pathways 20th-anniversary luncheon in the spring, was one of those youths.

“Much like a lot of inner city youth, I was disobedient to my parents,” he said. “I didn’t want to listen to the rules.”

His bad choices continued, Wilcox said, as he impregnated a girl and began selling drugs on the street as a way to earn money quickly for his child.

His parents were at a loss and sought out Pathways to help him. His mentor, Michael Manley, would visit him at home and even take him to job interviews.

“It’s a great program,” Wilcox said of Pathways. “But it wasn’t what I needed at that time. … (Manley) wanted to get me to the next level. At the time, I wasn’t willing to hear any of it.”

Wilcox wound up in prison after being found guilty of weapons and drug charges. But the foundation Manley had tried to provide him had set, and he used his time in jail to earn a vocational trade certificate and his high-school equivalency diploma.

“I decided I wanted to be a better figure for my community,” he said.

Because he had been granted youthful offender status, Wilcox said he didn’t have to list his record on job applications upon his release. He obtained a job at Wegmans and went back to school at Monroe Community College. And Manley reached out to him via social media at that time and offered his support as well, Wilcox said.

“I was able to see what he was trying to tell me before I had went away,” he noted. “Everything made sense. For Manley, my parents, my pastor, all the adults in my life, I wanted to make them proud of me.”

After MCC, he graduated in 2017 with a bachelor’s degree in public health from SUNY Brockport and now works for Foodlink as a community nutritionist. He encourages youths to find their passion and work hard as a way of avoiding the route he took, Wilcox said.

In hindsight, he said he wishes he had heeded the advice of his elders sooner, including that of his Pathway’s mentor.

“That’s why it’s good to have the Pathways to Peace program; you’re not just hearing (advice) from regular adults,” Wilcox added. “You’re hearing it from adults who are close to (participants) in age and adults from the City of Rochester. … Look at the small connection I had with them. Imagine had I not went away for 18 months, how much further along in life I’d be now. I would have graduated two years earlier, probably been doing what I’m doing now times 10.”

Wilcox was referred to the program by his parents, which is one of the ways that youths find their way to Pathways, Mayoliz said. The program also receives referrals from hospitals, the court systems, law enforcement officials, friends and other city staff members, he said.

Those community connections is why the program has not only endured since 1998 but continues to expanded its services, having grown from a team of five to that of 12, Mayoliz added.

While staff members may no longer be working overnight, they stay on top of incidents and visit with family or other people involved to diffuse any retaliation plans, said Mayoliz and Johnson. They establish contacts with people on the streets as well as with organizations that deal with these incidents, including hospital staff and other youth organizations, they added. And they conduct a safety assessment of a victim’s home environment to make sure the person returns home without incident when discharged, Mayoliz said.

“Our number-one priority is to prevent retaliation,” he remarked.

Another important aspect of the team’s work is to provide insight so Mayoliz can map out incidents of “gang” or group violence to determine patterns and provide intervention where needed, Mayoliz explained. Social media has become an important tool for Pathways’ staff to attempt to prevent or respond to incidents, he added.

“And (the program) continues to bring in people who can relate to youth, not somebody like me with a shirt and tie, but someone who can talk their language,” Johnson said.