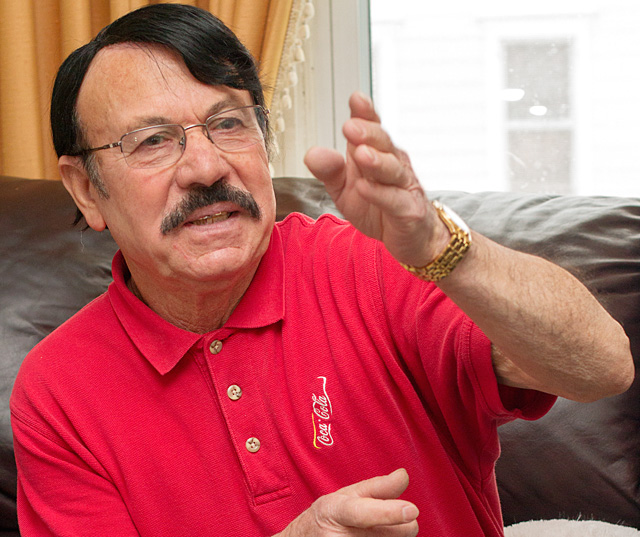 ROCHESTER — The need to communicate transcends all barriers.

That is the story of Angel Luis Martínez, a Puerto Rico transplant who was born deaf and mute. He not only created his own personal sign language to "speak" with family and friends, he also developed a strong work ethic that began with work at a farm in his native Coamo.

When he moved to Rochester at 18, he followed in his father’s footsteps and took a job alongside him at the Coca-Cola bottling plant on Hudson Avenue. There, he worked for four decades until his retirement three years ago.

During a Jan. 2 visit to his family home near North Clinton Avenue, he proudly showed off a wall-size poster signed by his coworkers when he retired. His sister used motions to ask him questions while being interviewed for this story, and nearly every time, his answers were punctuated with a smile.

His 94-year-old mother, Santiaga Martínez, knows him best, said sister Josefina Rivera. He was the third oldest of the family’s 11 children, said Rivera, who is the youngest. Two of the siblings are deceased.

Santiaga Martínez said that raising all those children was "mucho trabajo (a lot of work)."

But without any other deaf family members, she was taken by surprise when Martínez still did not speak once he started walking, she said. Another family member noted his lack of response when called as a toddler, and they realized he was deaf, she added.

But she did have a cousin who was mute, Santiaga Martínez noted.

So, the family adapted and used different signs for the names of all the siblings as well as for other words. For example, one brother he identifies by pointing at the base of his neck that indicates the length of his hair. For another, he touches his cheek to indicate freckles.

Angel Martínez, who turns 70 on Feb. 18, laughed as they went through the different signs for his family members.

"He has a name for everybody," Rivera said.

Early on, he also displayed a penchant for working hard in the fields of a nearby farm at age 14, said Santiaga Martínez. He had picked up the machete skills at the side of his father, whom he would follow to the farm as a young child, she added.

He moved to Rochester in 1969 following years of traveling back and forth from Puerto Rico, she said. Only seven days after arriving, he began working at Coca-Cola. He worked on the assembly line mixing the sodas, Martínez explained through his sister.

"He did a lot," said Rivera. "I never understood how he was able to communicate."

Martínez, who attends Mass at St. Michael Church, had picked up some American Sign Language when he attended Rochester School of the Deaf for a couple of years, his sister said. He indicates that he learned a little but not enough, although he would practice with some of the friends that he made at the school.

"Every Saturday, he always had five or six girlfriends stop by and visit for a while," his mother teased him, and he laughed in response. "They would talk in sign language."

Fermin Sabastro said that Coca-Cola coworkers didn’t know sign language, so they would just show him the process as they worked on the production line. And whatever job he was assigned to on that line, Martínez would do it well, Sabastro added. The two worked together for more than a decade at the company’s Hudson Avenue plant, he said.

"He was great," Sabastro said. "He would do whatever we asked of him."

Sabastro said that while coworkers always found a way to communicate with Martínez, they made sure to look out for his safety. And it was uncanny how at times Martínez knew what a person was thinking before they even tried to show him, he added.

"He knew Coca-Cola like the back of his hand," Sabastro remarked. "He knew more than I did … and did everything well."

Angel Martínez motioned how staff would walk him through the different jobs at the factory. If they couldn’t explain something, they would write it down, he said through his sister. He never learned how to read lips, but he did learn how to read and write in English and Spanish, Rivera said.

"God takes away something but he gives you something else," she remarked.

Martínez is especially proud of the wall-size poster from his coworkers. All visitors are asked to come see the poster that hangs in a porch off his kitchen. He also shows off photos from the retirement party the company provided for him and a leather racing jacket he received as a gift.

That kind of pride in one’s work offers inspiration to all, but especially for people who complain about having to work hard or of not wanting to work, Felix Martínez Marrero, a Holy Apostles parishioner, remarked of his cousin.

"People like him never get recognized," he added. "But he is an example for others."