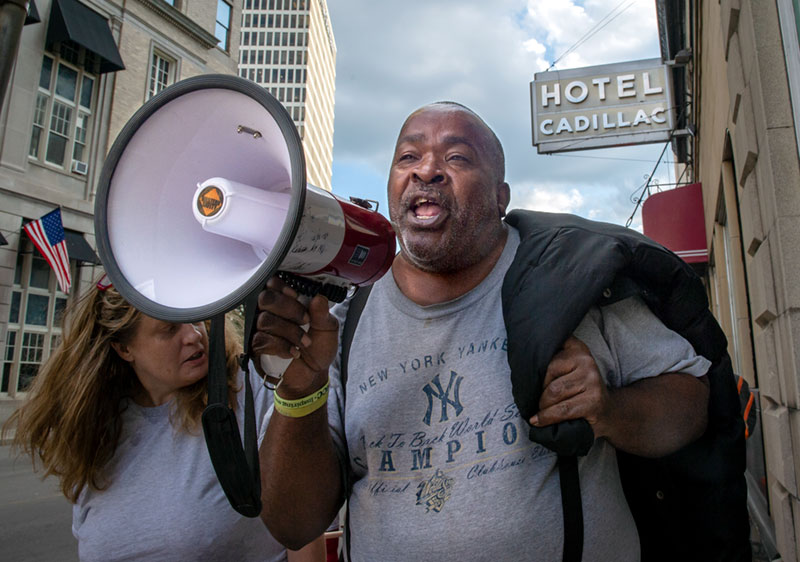 A protestor leads a march down in front of the Hotel Cadillac in Rochester with members of the Rochester Homeless Union and its supporters during a demonstration Oct. 9. This photo won third place honors for Best Photograph at the 2019 Catholic Press Association Awards.

During that time, he met other homeless individuals during a stay at the House of Mercy homeless shelter.

“I got to know them as people,” he said.

Interactions with other homeless residents helped him see that his personal situation was common for many people who become homeless, Braswell told El Mensajero Católico Sept. 11. He said he lost his job and became homeless when he could not pay his rent because he was not receiving unemployment benefits. After leaving the House of Mercy and moving into a Volunteers of America shelter, he found a job in Avon. When he couldn’t return to the shelter after work in time for a mandatory check in — a requirement for him to receive food or medical benefits from the Monroe County Department of Human Services (MCDHS) — he was sanctioned by MCDHS for 30 days and left without access to benefits.

In light of his experiences, Braswell and other homeless residents he had met decided to form the Rochester Homeless Union and create a public campaign against such sanctions.

“This (union) has given me a purpose,” he said. “All the obstacles I ran into, it was all for a reason.”

Braswell was among union members who attended meetings of the Monroe County Legislature this fall to protest sanctions against recipients of MCDHS benefits. Recipients are required to follow certain rules in order to maintain benefits and/or to be allowed to stay in county-run shelters. Union members say the regulations are overly strict and that sanctions for breaking the rules can lead to stress and other medical issues as well as homelessness by withdrawing funds to pay for rent.

Braswell and other union members participated in a Sept. 11 rally in front of the county’s office building on West Main Street and an Oct. 8 march from the Cadillac Hotel to another legislature meeting to protest sanctions. Before it closed earlier this year, the hotel had offered a low-cost option for housing for low-income individuals.

The protests were intended to raise awareness of the reasons welfare recipients are denied services or have their services suspended, such as for failing to check in to a shelter like Braswell, or for drug, alcohol or employment violations, including not making it to an interview or not making enough job applications, union members said.

Sister of Mercy Grace Miller of the House of Mercy said the sanctions are hurting people and occur at a rate higher than in most counties of the state. According to data collected by Nazareth College Professor Harry Murray, an average of 629 welfare recipients per month were sanctioned in Monroe County, compared to 335 recipients in New York City in all of 2017.

Sister Miller and her supporters are regular speakers at county legislature meetings, so county officials are aware of their position on sanctions, said county spokesman Jesse Sleezer.

“The Monroe County Department of Human Services appreciates the support and assistance of all community stakeholders who share an interest in improving outcomes for at-risk residents in our community,” he added. “Additionally, it is important to note that all sanctions implemented by a local social service district are mandated by state law and regulation — MCDHS has no authority to set or alter state-mandated policies.”

Sleezer said the county’s sanction policy is producing improved outcomes for at-risk residents and families in Monroe County. By providing employment resources and referals, MCDHS’s temporary assistance caseload dropped from more than 12,600 to under 10,300 from January of 2016 through January of 2018, Sleezer noted.

Despite the county’s response, Sister Miller and union members said they planned to continue pressuring the county to offer alternatives to sanctions to more effectively help welfare recipients.

“We are letting them (union members) carry the cause to empower them,” Sister Miller said. “We’ve got to get people affected speaking … and I’ll support you.”

In addition to advocacy, the Rochester Homeless Union will provide support and connect individuals to such resources as counseling or referrals to local shelters, Brawell said.

“That’s why I started the union, people can always come and talk to us,” he said.