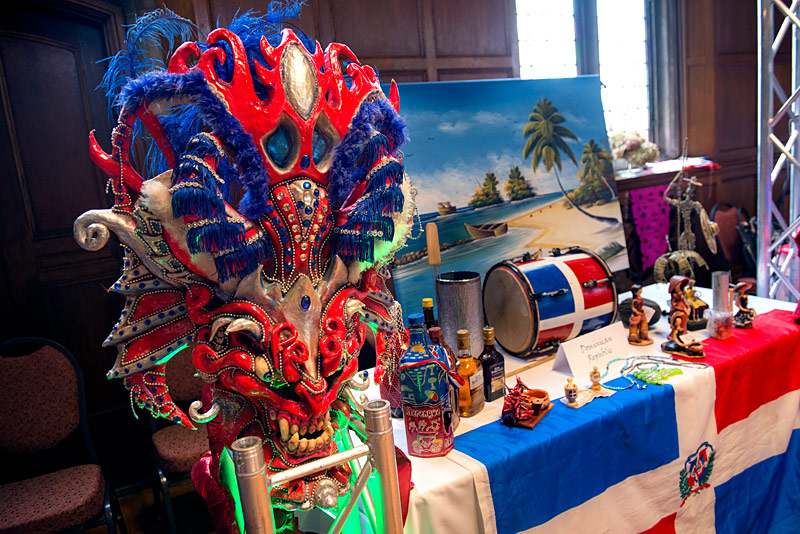 A table displaying cultural items from the Dominican Republic was one of many on display during the Memorial Art Gallery's Hispanic/Latino Heritage Family Day Oct. 8.

ROCHESTER — Outdoor events with food and music are planned to kick off Hispanic Heritage Month in the cities of Rochester and Geneva.

The Sept. 14 lunchtime event in Rochester was to be held outside on the City Hall steps, weather permitting, with food trucks and musical performances, said Johanna Santiago, chair of the city’s Hispanic Heritage event.

Santiago said that a few years ago the city had tried conducting an after-work-hours kickoff event but decided to bring it back to mid-day so it could be offered outdoors and draw in downtown employees and residents.

“It may be the last thing we can do outside (although) with this year’s weather, you never know,” she remarked.

The Rochester kickoff is one of several events planned to celebrate Hispanic Heritage Month, which is presented nationally from Sept. 15-Oct. 15. Other area activities will include a Mass, a film festival and a Latina empowerment event. (See the calendar of Hispanic Heritage Month events at elmensajerorochester.com.)

The venues for Rochester’s youth events are changing due to the renovation of the Stardust Ballroom at the Edgerton R-Center, where they have taken place in the past, Santiago noted.

One of the events will bring city teenagers to City Hall to watch a screening of “Coco” and participate in a panel discussion about what they can learn from their ancestors. The event also will give them a feel for what it’s like to be in the City Council Chambers and an opportunity to walk through the Latino artists’ exhibit in the building’s gallery, Santiago added.

On the other side of the age spectrum, the city will honor Latino elders Johnny Vega and Matilda Cruz, Santiago said. Vega served as the grand marshal of the Puerto Rican Parade of Rochester on July 28.

In Geneva, the seventh-annual Latino Festival moved its event from July to September to coincide with Hispanic Heritage Month and will offer rides for the first time, said organizer Rafael Díaz.

The festival will take place Sept. 14-16 in front of the city’s Welcome Center on Seneca Lake. Admission is free. About 2,500 people attend the festival each year, Díaz added.

In addition to rides, the festival will offer music from local bands, children’s games, information booths from local organizations and artisans from Puerto Rico, he said.

“It’s called the Latino Festival to include all of the Hispanic community so that eveyrone can feel welcome and at home,” Díaz added.

The annual Hispanic/Latino Heritage event at the Memorial Art Gallery also will represent the different cultures of Latin America and is now part of the museum’s Celebration Series, said Jessica Gasbarre and Rachael Brown from the community engagement office.

Based on surveys and feedback from the gallery’s cultural events program formerly known as Family Days, there was a sense that the events were aimed only at families, they said.

“We want this to be for anyone in the community to come and celebrate and be immersed in different cultural experiences,” said Gasbarre.

The name change for the events went into effect during Black History Month last February.

This year’s Hispanic/Latino Heritage celebration will include poetry, dance and a musical finale. A fashion show will present the folkloric clothing from each of the countries in Latin America. The day will include the annual spotlight on one country, which will be Costa Rica this year, said Brown.