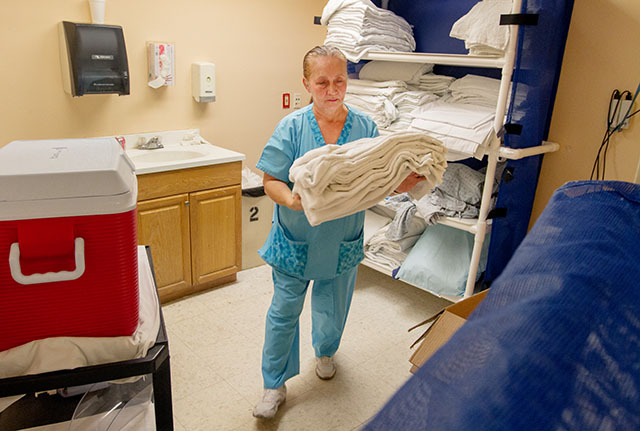 Maria Lopez, a certified nursing assistant at Blossom Nursing Home in Rochester, loads towels onto a linen cart to bring to patients' rooms so that they are in place when she puts the patients to bed at night Dec. 7. Lopez, who works with patients who have Alzheimer's or Parkinson's diseases, will retire in March after working at Blossom for 42 years.

ROCHESTER — Maria López may be a 62-year-old on the verge of retirement.

But that doesn’t mean she has lost the zeal or desire to continue advocating for those without a voice once she retires as a certified nursing assistant this spring.

And if not for her commitment to fighting for justice, countless workers in area nursing homes might not have received the job security that came with the formation of a union that López spearheaded more than a decade ago, union officials said.

"We talked about Hispanic labor leaders like Cesar Chavez and Dennis Rivera, but also about our own working class hero: Maria López," he said. "Maria was responsible for bringing 1199 back into the fight for better conditions for staff and residents in Rochester’s nursing homes. … Her story is a compelling real-life history of perseverance, courage and a single-minded focus on justice."

Popper first met López in 1997 when she called the union to form a chapter and negotiate with management to secure raises that workers had not received at the Nortonian Nursing Home, which later became Jennifer Matthew and is now Blossom North, he said.

"Maria emerged as one of three key leaders together with another certified nursing assistant and a licensed practical nurse," Popper said. "The other two left before the first contract was complete, leaving Maria the sole key leader for her peers."

López said that she never gave up, though, even when faced with being fired or coming to work in the freezing cold to locked doors to braving a blizzard to reapply for jobs at the nursing home. López never doubted that what she was doing was right, Popper said.

"She was guided in a faith that a person must combat injustice wherever they encountered it," he said. "So often, management’s tactic against workers is to demoralize them and make them feel powerless. Maria never succumbed to that pressure. She was going to do what was right, no matter what the consequences."

Her entire life has been focused on helping others, she said, beginning with her son, who was born with spina bifida. At 24, she moved to Rochester after a short time in New York City so she could raise her infant son with support from her parents, who had already moved here from Cayez, Puerto Rico, López explained.

Her son has had 37 surgeries to relieve the pressure on his spinal cord. Having to learn how to care for her now 42-year-old son following all those surgeries is how she became interested in nursing, López said.

So when she decided to train as a nurse’s aide, she turned to Action for a Better Community, which had a nursing aide training program at that time, she added. The training also offered López the opportunity to support herself as a single mother with another son and daughter, she said.

Fifteen years ago, she became certified as a nursing assistant as required by the state, López added. Currently, she helps care for patients suffering from Alzheimer’s at Blossom North, she said. While the work is challenging, she said that she will feel sad leaving the patients upon her retirement.

The bigger challenge she experienced on the job was dealing with the mismanagement of workers that she saw during her early years as a nursing assistant, López said. The straw that broke the camel’s back, she said, was when she and three other workers found themselves standing in the freezing cold outside their employer’s locked door in the late 1990s. She had left a note explaining the situation, and yet they were fired, she said.

So, López began meeting with Popper and union officials soon after but four years of picketing and negotiations followed, she explained. And two decades later, she knows she is still the linchpin for the union’s chapter at the nursing home.

"Every time, there’s some disagreement, I get a call, ‘I need you,’" she said.

The obstacles she overcame for her fellow workers to be able to make those calls to her were as small as navigating a blizzard to reapply for a job and as large as testifying in a trial before the National Labor Relations Board. And now, she looks back on those days fondly, she said.

Her coworkers will have a big void to fill, noted Popper, as will management because López always considers every situation fairly.

"She has gotten second chances for those who sincerely made mistakes, but she is not hesitant to call out a worker who is not giving good care," he said.

"Part of our Catholic tradition of social justice is to defend the rights of workers, as Maria has done," he said.

López said that she also is grateful to the union for all the training and for providing opportunities to travel to such cities as Philadelphia, New York and Washington, D.C., for conferences.

And local workers owe a debt to the countless hours López put in to raise their working standards, agreed Father Tracy and Popper.

"Maria never doubted that what she was doing was right," Popper said. "She was guided in a faith that a person must combat injustice wherever they encountered it."