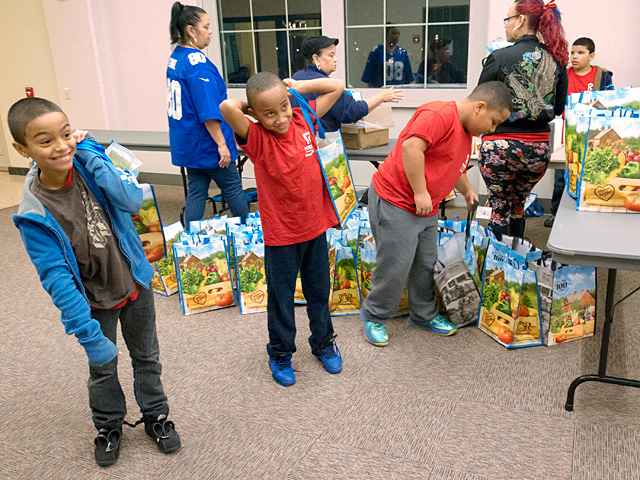 ROCHESTER — Mike Rosario had been coaching various sports at a city recreation center when he decided to do a little more to help some of the boys on the teams.

Another group at the Gantt Recreation Center called itself the Impact Team, so he decided to borrow the name, albeit in Spanish, and call his boys Grupo Impacto.

"I noticed they didn’t have any mentors," Rosario said of the boys at the center. "Most are athletes … and I wanted to introduce to them to community work with education as number one (focus). I want to make sure they grow up being nice young men in the community."

He recruited 10 boys ages 7 to 12 for his group this past summer, including a few who were part of the original team formed more than a year ago, he said. He lost several of the members from the first group when their parents wouldn’t allow them to come to the center after a nearby criminal incident, Rosario explained.

"Due to violence, I lost the first group," he said. "There’s too much going on in the streets. I want to start them off (on the right foot) early."

On Dec. 1 at the Port of Rochester, half of Rosario’s current group served as volunteers for a community service project stuffing gift bags with donated toiletries. The bags were presented to elderly residents of the Rochester Housing Authority’s apartment complexes a few days later during a holiday party at the port.

Geena Cruz, who organized the event, said she had put out a call for volunteers to assist with preparations for the holiday party. Rosario immediately answered and said he would bring his boys to help, she added. The boys also have marched in the Puerto Rican Parade, helped set up the Hispanic Heritage celebration at Rochester City Hall this past October and have served food to the homeless, Rosario said.

"I love them," Cruz said. "And being in this group is teaching them outreach and letting them see that there is a need out there … to help (others)."

The boys also had fun after they finished their task Dec. 1 at the port and ran around the Lake Avenue building taking pictures against the murals that decorate the interior walls. They also took group photos against the backdrop of Christmas lights on buildings near the Genesee River.

Marilys Alvárez, whose 8-year-old son is part of Grupo Impacto, said she likes everything about the group. She also serves as Rosario’s assistant during group meetings and outings. Rosario requires the boys to do well academically and behave well in school in order to continue participating in the group, as well as in the center’s sports leagues, she added.

Those expectations teach them that, "We are leaders," Alvárez said.

By involving the boys in community service projects, which include picking up trash from the streets around the center, they learn that serving others also is part of leadership, she said.

Her son, Luis Cruz, said serving the community is one of the parts he likes best about being part of Grupo Impacto.

"I can help people … and give them stuff," he said.

Besides helping keep their neighborhood clean, the group is saving money from returning bottles cans to take a field trip to Seabreeze Amusement Park in the summer, said Richard DeJésus, 12.

"It’s good that we clean around the center because it’s like, we are in it too," he said.

The city also provides additional funding for the group’s red T-shirts and for transportation to off-site activities, Rosario said. He hopes the group can raise funds to also go ice skating and sledding so members will be exposed to activities they wouldn’t normally do with their families, he said.