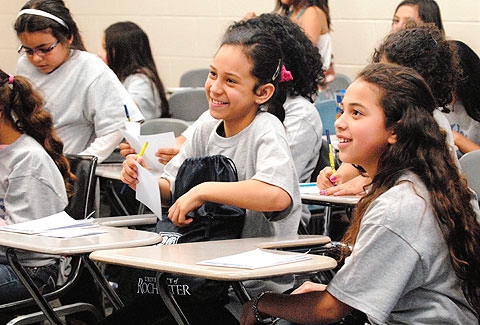 ROCHESTER — As an engineer, Miriam Ojeda said that she was thrilled to bring her 8-year-old daughter to the ¡Soy Única! ¡Soy Latina! rally, which this year focused on science, math and technology.

She also appreciated exposing her to a local university, as she already has taken Emily on a tour of the University of Puerto Rico during visits to her native Cabo Roja, Ojeda said during the rally held March 24 at the University of Rochester.

"I’m always telling her you can whatever you want," Ojeda said.

Providing that kind of inspiration is the goal of Latinas Unidas, which celebrated its 10th anniversary of presenting ¡Soy Única! ¡Soy Latina! for girls ages 7 to 17. The initiative of the U.S. Department of Health and Human Services was initially presented as a bilingual, public-education program in partnership with Catholic Family Center. That inaugural event took place at the Downtown Presbyterian Church and featured former U.S. Surgeon General Antonia Novello, who is a Puerto Rican native, explained Latinas Unidas president Daisy Rivera-Algarin. In 2005, Latinas Unidas took charge of the initiative and UR became the main sponsor in 2008 through Iveth Reynolds’ connections with UR, Rivera-Algarin noted. Reynolds was the event committee chairwoman.

"I’m very proud," noted Rivera-Algarin. "And I’m optimistic that these girls are going to make it in the future."

Opening girls’ minds to the careers available to them has always been a goal of Latinas Unidas. This is the basis for the organization’s recently established collaboration with the STEM-SMART program, explained Uma Gupta, executive director.

The program provides online guidance and mentoring to women and minority students to pursue degrees in science, technology, engineering or math through its alliance with colleges, universities and companies in those fields, Gupta said. The program also offers internships and other career opportunities, according to www.stem-smart.org.

Gupta said that she partnered with Latinas Unidas because both organizations agree of the need to dispel stereotypes that girls, especially minority girls, are not good in those fields. Gupta also used make-up to illustrate a real-life connection of science to the girls’ lives.

"We make it a fun thing so they really understand that every day life is totally driven in some way, shape or form by science and engineering," she said. "And we want them to see the importance of getting a (higher) education."

Based on surveys filled out by the girls and their parents during the rally, Gupta said that she also hopes to develop a customized program with Latinas Unidas as part of STEM-SMART.

"We don’t want to just do a camp … but a series of activities that keep them engaged," she said. "It’s not just a one-time thing."

This year’s rally also encouraged participation in sports and offered demonstrations in soccer, tennis and fencing. Iris Zimmerman, who graduated from Stanford University and was part of the U.S. Olympic fencing team in 2000, explained the equipment and technique with her staff from the Rochester Fencing Club.

Following a couple of informal matches between Christine Griffith and Jocie Svengsouk, the girls came down to learn some of the footwork that is part of the sport.

Ten-year-old Noon Medero took to the sport like a fish to water. Zimmerman even encouraged the Durand Eastman Elementary School fifth-grader to visit her club and consider lessons.

Noon said that she learned about fencing from watching the History Channel.

"They talk about duels and jousting," she said, adding that she enjoyed seeing how it’s done in person.

"I thought it was pretty cool," Noon added. "I never watched the Olympic games, but it seems pretty fun."