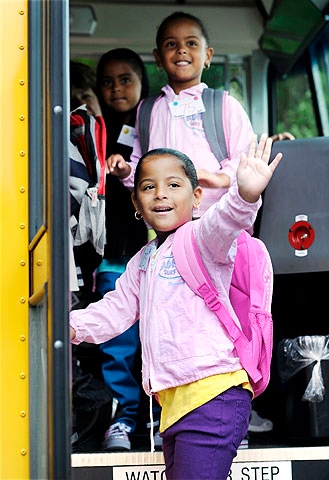 Not your typical back-to-school list, but that’s the reality for the Barreiro family as they prepared their quintuplets for their first day of school at Ginther Elementary School in Brockport.

Friends and family keep asking Marisol Barreiro what she’ll do with herself when the children — including eldest daughter, Soleemar who is now 10 — are at school, she said during an Aug. 23 interview at the family’s Hamlin home.

"Sleep, party, have a good time," Marisol said with a big laugh. "The things I can’t do when they’re here, hopefully I’ll be able to do."

That list includes such mundane tasks as folding laundry and putting it away, she said, as the laundry would usually end up in piles in the living room as the energetic bunch bustles around her. She’ll relish going to the grocery store during the weekday instead of waiting for when husband, Carlos, gets home from work or asking her mother, Moncita Rodríguez, to watch the kids, Barreiro said.

And speaking of school, Marisol said that she also plans to take college courses on a part-time basis at SUNY Brockport at a later point when the kids are settled into their new routine.

"But for now, I’m just trying to get them ready," Barreiro said.

She anticipates that mornings will be hectic, especially with having to fix hairdos for the three girls, Emealis, Lysmarie and Zoraelis, she said. Jomar and Darón have short, cropped hair.

"But they can dress themselves and brush their teeth, which makes it (getting ready) way easier," Marisol added.

Three of the children will be in one classroom and the other two in another partner classroom, she said, per her request that the quintuplets not be separated. The placement was arranged that way because of the special circumstances, explained Rosemary Custer, Ginther’s principal.

Custer added that she appreciated having Marisol’s input — as well as input from the children’s preschool programs — when it came to placement.

"Just her level of commitment and understanding and dedication as a mom in supporting her children in their education, it’s just wonderful," Custer said.

While the district’s student population does include twins and other multiples, this is the first time she can recall quintuplets starting school at Ginther, said Custer who has worked there for 12 years and was named principal four years ago.

"This is exciting and unique," she said.

The family has come a long way since all five babies slept in their big sister’s crib when they first came home from the hospital, Carlos explained. They were born Dec. 7, 2005, at 26 weeks of gestation and weighed between 1 pound, 1.5 ounces and 1 pound, 14 ounces.

"We did everything here — naps, diapers, feedings," Marisol added about the living room setup.

The family didn’t have to buy diapers for the first two years thanks to donations and gift cards that were funneled through St. Michael Church, where the Rodríguez family has been parishioners for many years, said Marisol’s mother. Cribs also were donated, so the couple was able to move the babies into their former master bedroom in the split-level house. Once the quintuplets began climbing out of the cribs, the couple moved them into toddler beds, Marisol said. Now, the two boys have their own room with bunk beds and the girls have a bright pink room with three small beds set up along one wall. Soleemar has her own room, and Marisol and Carlos created a master bedroom on the lower level.

Their daily routine this summer has been low key, with the kids staying in their pajamas on days where the family is not going anywhere in the Ford Excursion that seats them all. But they have traveled by plane for a family wedding — with other relatives in tow to pair each child with an adult, Marisol said. They also took the children to Disney World — driving at night when the children were asleep — but the quintuplets were more excited about the pool at her brother’s home in Florida, she added.

Soleemar said that having so many brothers and sisters can be overwhelming.

"Sometimes, it can be annoying," she said. "When mom found out she was having five (babies), I wanted to explode. But it’s getting better."

Carlos Barreiro recalls not too fondly how any time the children became infected with an intestinal virus, he would be the last one to get it.

Other than those typical kinds of illnesses like stomach bugs and ear infections, the quintuplets have been healthy since coming home after spending months in the neonatal intensive care unit at Strong Memorial Hospital, where they were the first quintuplets born since 1993, according to information from the University of Rochester Medical Center. In 2005, there were 4.2 million births with 68 women bearing five babies or more, according to www.cdc.gov/nchs/data/nvsr/nvsr57/nvsr57_07.pdf.

The Barreiro quintuplets are now all in the upper percentiles for weight and height, and they all have healthy appetites, Carlos noted.

Emealis does have asthma but has not experienced any attacks, the couple said thankfully.

Jomar has been receiving physical and occupational therapy because his muscle tone is weak, Marisol added. Jomar turned out to be the baby with a bleed on the brain that doctors detected during her pregnancy, she explained. He has been working hard on holding a pencil, scissors and crayons in preparation for school.

"He is very determined to do what is asked of him," Marisol said.

Emealis, Darón, Lysmarie and Jomar have received physical, occupational, speech and music therapies over the years. Zoraelis was the one that did not need services except for early intervention when the infants first came home from the hospital, Marisol explained. Emealis also went through some physical challenges when soon after coming home, she had to go back to the hospital for removal of a bowel obstruction that she was born with, her father explained.

All of the quintuplets went through preschool programs overseen by the Board of Cooperative Educational Services No. 2, except for Zoraelis, who went to Ginther last year. Her siblings now say they’re going to "Zora’s school" for kindergarten, the couple said.

Zoraelis said that she’s happy that her siblings will join her at Ginther.