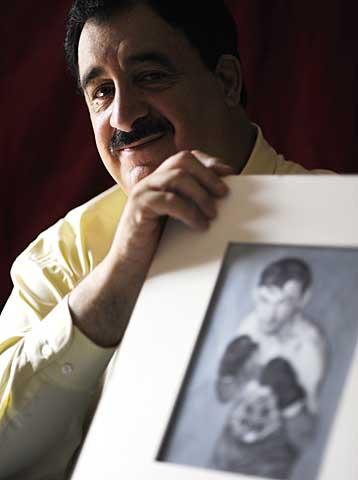 ROCHESTER — Yogi Berra. Arnold Palmer. Rocky Marciano. Jim Brown. These were only a few of the sports legends who, throughout the 1950s and 1960s, traveled to Rochester each January to collect their Hickok Belt as the country’s top professional athlete.

Four decades have passed since the last Hickok banquet was held here, making it appear strictly as a thing of the past — except, perhaps, to somebody who believes the award is too vital to Rochester’s sporting community to lay dormant any longer.

Enter Tony Liccione, who wears several hats. He’s a retired photographer. A Knight of Columbus since 1986, he just ended a seven-year stint as Grand Knight for Rochester Council 178. He has served since 1990 as president of the Rochester Boxing Hall of Fame — "the longest active promoter in town," he noted.

"It’s been my passion to do it for at least 25 years. I want to preserve its historical legacy. It was the most prestigious sports award in the United States, and Rochester deserves to get it back," said Liccione, a native Rochesterian. "It was like the Academy Award of all sports, the crown jewel of all sports, and we’re going to bring it back."

Begun in 1950, the Hickok Belt helped make Rochester, a predominately minor-league sports city, a major-leaguer in the world of sports banquets. The belt was named after S. Rae Hickok, who operated a belt company in Rochester, and the trophy was a diamond-studded, gold-buckled belt.

After Hickok Manufacturing Co. was sold, the award ceremony was held in larger cities from 1971 until its discontinuation after 1976. All 26 Hickok winners were male; the only four sports represented were baseball, football, boxing and golf. Baseball pitcher Sandy Koufax was the award’s lone two-time winner, in 1963 and 1965.

Liccione is aiming for a Hickok rebirth banquet in Rochester in 2011, with reinstatement of the actual award by 2012. He said a number of civic organizations and dignitaries have embraced his quest. Also helping to promote this cause will be a book on the Hickok Belt, due to be released in November 2010 by Rochester Institute of Technology’s Cary Graphic Arts Press. Liccione commissioned Scott Pitoniak, a longtime local sports writer, to write the book that details the award’s history, its recipients and what became of their belts.

Liccione added that he also is seeking to establish a Hickok Belt museum in Rochester. Liccione contended that although his plans are ambitious "nothing’s impossible. It’s going to be done."

Based on his track record, Liccione’s words should be regarded as more than hype. In his leadership role with the Rochester Boxing Hall of Fame he’s put together numerous fight cards and banquets, drawing many of boxing’s biggest names to Rochester — from Muhammad Ali, the 1974 Hickok recipient, to Joe Frazier to Robert Duran to Oscar De La Hoya. For the Hall of Fame’s next annual banquet on Nov. 13, 2010, Liccione has secured guest commitments from former heavyweights Riddick Bowe and Earnie Shavers and is hoping to add another, Lennox Lewis.

Liccione’s boxing-related activities often involve goodwill gestures. Some examples are arranging fight-film nights at Monroe Community Hospital and VA hospitals in Canandaigua and Batavia; holding a special banquet in 1994 to support former heavyweight George Chuvalo, who had experienced a number of family-related tragedies; and in late May staging a birthday party for Irondequoit’s Carmen Basilio, the 1957 Hickok winner and former world middleweight and welterweight champion.

The dedication exhibited by Liccione, 61, has not gone unnoticed. On May 12 he was honored with the Morrie Silver Award, given annually by the Rochester Press-Radio Club to an individual who makes special contributions to promoting sports in the Rochester area.

Liccione emphasized that he seeks nothing in return for his work on the Hickok Belt or any of his other causes; he’s just happy to support the community.

"I think everyone should give back when God is good to you," said Liccione, a parishioner of St. Elizabeth Ann Seton in Hamlin. "Giving back to your fellow man, that’s what it’s all about."