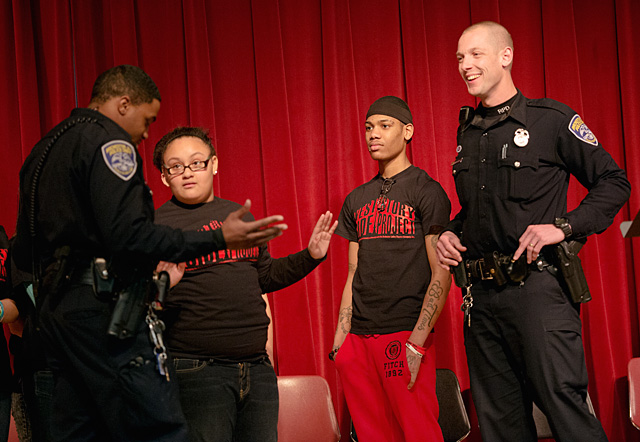 ROCHESTER — Orlando Santiago missed so many days of school that he eventually got into trouble and ended up facing probation.

"I used to love school," said the 16-year-old East High School student. "But once I got to high school, I did not feel the same love from teachers. I didn’t feel like going."

Orlando was eventually referred to Hillside Family of Agencies’ juvenile justice diversion program. This led him to participation in last month’s West Side Story Project, during which he said he learned such valuable skills as interacting with new people and seeing police in a more positive light.

"It helped me to get my word out more," he said Feb. 28 prior to getting on stage for a presentation called "Bridging the Gap."

"Education is the key to success," he added. "Without education, there is no future. This (program) helped me see that."

The West Side Story Project included students performing skits and conducting an interactive forum in the presence of such community leaders as Mayor Lovely Warren and Rochester Police Department Deputy Chief Wayne Harris. The program was presented by the West Side Story Project collaborators, which include Rochester’s recreation department staff, the Rochester Police Department and Ibero-American Action League. The Rochester Latino Theatre Co. (RLTC) worked with students over the past month to prepare them for the Feb. 28 forum held at the Wilson Commencement Academy.

The forum was aimed at building positive relationships between African-American and Latino youths and local law enforcement agencies, organizers said. A couple of the improvisational skits during the program even included two volunteers who are Rochester police officers.

"It was nice to be able to connect with youth in a different atmosphere," said Officer Michael Turbeville, who is in his second year on the job after nine years as a high-school teacher in Kendall, Orleans County. "This is a nice atmosphere to be able to talk and relate to youth."

He concurred with some of the students’ comments that sometimes their first interactions with officers are in negative settings.

"This (program) definitely helps me," he said. "Connecting with youth is so valuable."

The program kicked off last fall when RLTC partnered with the city’s Department of Recreation and Youth Services to provide groups of youths from several of its community and recreation centers with a theater-based curriculum that focuses on conflict resolution, gang intervention and cultural education. The project’s first group comprised girls from Avenue-D Recreation Center’s dance troupe. Annette Ramos, cofounder of the theater company, and José Casado, a writer and director, worked with the girls on scene improvisation and writing a sequel to the story. That group also saw a live performance of RLTC’s presentation of "West Side Story."

A few of those girls subsequently worked on creative writing with Ramos and Casado and read their essays and poems during the Feb. 28 program.

Seyena Gutierrez, 11, said that the West Side Story Project, along with participating in the Avenue-D dance group, has helped her realize her creativity potential in dance, writing and theater.

"I didn’t have a lot of things to do," said Seyena, a sixth-grader at School No. 52. "Sometimes when I’m home after school, I have nothing to do. Now, I’m not a bad child. But by learning new things, it helps you stay out of trouble."

Keeping urban young people engaged in their community and involved in positive activities is the foundation of the West Side Story Project, which began in Seattle in 2007, according to http://seattle.gov/police/youth/WestSide.htm. Youths from the program have traveled to other cities to talk about the success of the program as it has expanded to Chicago, Los Angeles and White Plains, the website stated. The U.S. Department of Justice’s Community Oriented Police Services (COPS) also makes information about the project available to police agencies nationwide.

Moses Robinson, who connected with Ramos and Ray Mayoliz from the recreation department for the local version of the project, heard about the West Side Story Project through his involvement with COPS. He is a school resource officer with the Rochester Police Department.

The program will expand to other recreation centers in the city, Ramos said, and RLTC is working on a summer program that will include showing and talking about the 1960s film version of "West Side Story."

"We are working hard behind the scenes to deepen the work as part of the RLTC mission," she said.