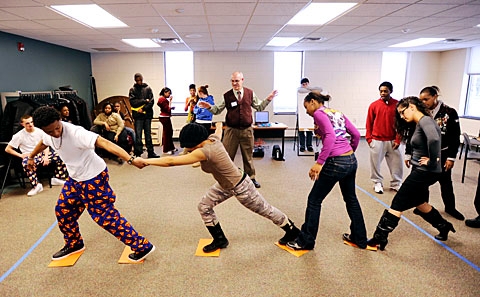 ROCHESTER – Miguel Vega didn’t expect to cross a "river" during a leadership workshop at the American Red Cross.

But that’s exactly what Rick DeJesus, St. John Fisher College’s vice president for student affairs and diversity initiatives, asked students to do during a March 23 session of the Next Generation Leaders Program at the Red Cross’ Greater Rochester chapter.

The students – from a variety of city high schools including East, Edison Tech, Benjamin Franklin, Joseph C. Wilson Magnet, School of the Arts and James Monroe as well as Greece Olympia – split into three groups and had to form plans that would enable all team members to cross an imaginary river by using stepping stones with which they had to maintain contact at all times. The stones were really blue, orange and yellow pieces of construction paper, and the river was just a space on the floor between two lines of blue tape in the Red Cross’ training room.

Nevertheless, Miguel, a Greece Olympia sophomore, said the activity emphasized how important it is for team leaders to be good listeners so that they can make decisions on how to reach a goal. Plus, the exercise was just plain entertaining, he added.

"It was funny to watch people try to cross," said Miguel, 15.

The exercise was also a good lesson on teamwork, he said.

"Everyone needs to cooperate," remarked Miguel.

Some teams chose to straddle stones as more stones were passed to the first person out in the "water." They advised each other to be patient and not to rush.

"Think about your plan," DeJesus advised them during each of the team’s several attempts. "Talk with your group."

Following the exercise, DeJesus had each group discuss what worked and what didn’t. Much of the feedback was similar: Team members should have listened to each other more, they should have done more advance planning; and they should have focused better.

"Success comes from analyzing failures," he noted. "That’s how you figure out how to improve. … Too often, groups don’t do that."

The Next Generation program evolved from the merger more than a year ago of the agency’s leadership development programs for Hispanic and African-American youths, said Liz Cinquino, assistant director at the Red Cross.

While the downturn in the economy meant a decrease in funding and staffing, the agency’s board of directors did not want to eliminate the minority leadership programs, she added. Board members "felt strongly that offering a leadership program to Latinos and African-Americans was critical," Cinquino remarked.

With the merger, they also decided to open the program to students in school districts outside the city of Rochester, Cinquino noted. Inviting suburban students also meant confronting preconceived notions that Latino and African-American students in the suburbs already get all the support they need, commented Jennifer Taylor, director of the Next Generation program.

Instead, she noted, such students may look at the teachers and students around them and not see themselves represented.

"They have the same concerns (as students in the city)about grades and succeeding academically, and getting their community service done, and developing leadership skills as well as post-secondary planning," Taylor explained. "It’s not always true that these services may be there (in other districts). …. This program provides for them and they get to see people who look like them."

One of Next Generation’s key focus areas is service learning, which gives the students the opportunity not only to meet community-service requirements for high school graduation, but also to identify a community’s needs, find ways to address them, and reflect on and celebrate their accomplishments, Cinquino explained.

She said the curriculum topics and workshops now also are aligned with New York state graduation requirements, including participation in government as well as the service component that requires keeping a journal and sharing experiences.

Next Generation is divided into fall and spring sessions, and the March 23 session included a presentation by members of the group that participated last fall.

Pat Moriarty, principal of Fairport’s Minerva-Deland School, attended the event in support of a student who participated with the fall group’s mission of educating the community about the need to improve access to measles’ vaccinations in other countries.

"I like the idea of Next Generation," he added. "(Leadership training) is important for kids."

The program continues to include structured mentoring sessions, noted Cinquino. And through a partnership with Big Brothers and Big Sisters of Rochester, students who are matched with mentors may continue those relationships outside of the Red Cross sessions, she added.

"We are in great need of mentors," Cinquino emphasized. "We have a history with Hispanic/Latino professionalsand we would like to bring them back. Our community is in great need of role models."

One of the program’s greatest accomplishments has been showing that its participants do want to learn and become future role models, noted Taylor.

"A lot of our kids have the desire to work to have that (good) future," she added. "This program helps provide them that (opportunity) to actualize what they dream about and be as successful as they want to be."

Miguel said he hopes to become a video game designer someday. He signed up for the Red Cross program because he thought it would be interesting and would be a good after-school activity.

"(The program) is going to help me to be a leader and teach me how to communicate with other people … and cooperate better," he added.