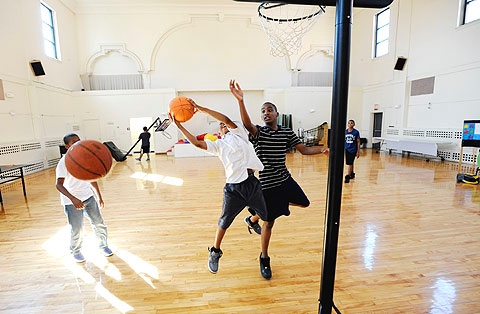 ROCHESTER — Every day is a new adventure for the staff at the Project HOPE youth drop-in center, which is located in the hall at St. Michael Church.

The afterschool program currently serves about 12 students although the number fluctuates on any given day, explained Fatima Peña, the program coordinator. She and two peer leaders strive every day to provide the children with a structured program of crafts and games and such activities as a "no-cook" food-preparation lesson, Peña added.

Teaching these children, who mostly walk to the center from their nearby homes or schools, that they can’t always have their way has been one of the biggest challenges, she said. The staff works tirelessly to maintain the ground rules they have established for the program — high expectations for behavior and respect for the center’s rules.

"They’re very strong-willed kids," Peña remarked. "They don’t have a lot of supervision."

But if the kids did have their way, Peña joked that they would play basketball the entire time they are there. The center’s two portable hoops were placed on opposite ends in the center of the floor as a court as soon as several boys entered the hall on March 21.

Just as important to the games and activities, the afterschool program also provides structure and adult guidance, she added. The majority of the youths who participate also do not have any fathers involved in their lives, Peña noted.

"We offer them this place … where they can feel comfortable and safe," she said.

This spring marks the first anniversary for the center operated by Project HOPE, which is an Ibero-American Action League initiative to improve the lives of residents in northeast neighborhoods through funding from the Greater Rochester Health Foundation. Last fall, Ibero’s children and youth services division also was hired as a subcontractor to operate the program, explained Miguel Meléndez, Project HOPE’s coordinator.

Peña had applied for a job with Ibero when the youth-center program coordinator position came up, she said. She possesses a wealth of experience working with children as an English for speakers of other languages teacher and bilingual teaching assistant in her native Santo Domingo in the Dominican Republic. She moved to Rochester nine years ago.

Her primary concern, she said, is to provide daily structure and support for the children who are enrolled in the program, which runs daily from 3 to 6 p.m.

"I love the kids," Peña remarked. "Our main challenge is to keep them motivated to come every day. It’s an ongoing challenge. But we can’t stop pushing and striving."

Recruiting children for the program has been a difficult task because of its specific target ages serving children ages 9 to 12, Meléndez added. Several times, families have asked the center to accept younger or older siblings, he explained.

"We try to accommodate whenever possible," Meléndez noted. "More children in general is the ultimate goal."

Initially, Peña enrolled 36 kids in the program but retained about half that number by the time the center closed for the summer last year, Peña explained. She added that she has reached out to St. Michael parishioners to have more of their children attend the center as well. And information about the center is placed in the bulletin, Meléndez added.

The church also has donated equipment, including foosball, ping pong and ice hockey tables that sit alongside one wall of the brightly lit hall, Peña said. Program funds were used to buy the basketball hoops, she added, and all of the equipment is moved out the way for any parish-related activities.

Recently, the center began offering workshops on a variety of issues led by Milagros Rodríguez, Hispanic prevention education program coordinator at DePaul, as part of the National Council for Alcoholism and Drug Dependence — Rochester Area.

The "Life Skills Training" program educates the kids on a variety of issues such as self-esteem, decision-making and smoking prevention, she added.

"It’s a program that has a comprehensive approach," she explained. "It not only addresses drug information and resisting drugs, but it’s also teaching kids the importance of having healthy life skills. And (having) such general life skills are important protective factors as far as prevention."

She is proud of the children at the center, who are attentive and welcoming every week, Rodríguez noted. She hopes that the information, guidance and mentoring that the children receive during the afterschool program will have a positive impact on their lives.

The caring the center staff shows the children is evident when Jahnaja Jones walks in and hugs Peña right away. The 9-year-old walks from her grandmother’s house on Evergreen Street. She loves playing basketball and taking part in all the center’s activities, but she said that she had one complaint.

"I never get to cook," Jahnaja said, because she usually doesn’t attend on the days that activity is offered.

Joseph Yeomas, 9, also is happy to come to the center.

Andrew Rodríguez said that he hopes the center will eventually be filled with children like Jahnaja and Joseph. He maintains his own busy schedule of working afternoons at the center, days at East High School and studying full time in an online program to obtain a bachelor’s degree in music.

"I love the (afterschool) program," he said. "Our main concern is just getting the word out."

EDITOR’S NOTE: For more information or to register a child at the Project HOPE youth drop-in center, contact Fatima Peña at fatima.pena@iaal,org or call 585-454-1200.