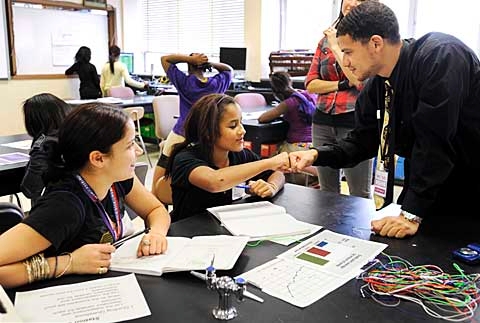 ROCHESTER — The small group of girls were split into teams of two to rotate between stations that would help them answer a pressing question on the minds of teenagers everywhere: Do video games improve reaction times?

The group of girls was one of several that met after school weekly this fall at East High School as part of the University of Rochester’s Warner School of Education’s "Science STARS" program. In classrooms throughout the building, the different groups of 40 middle- and high-school girls worked on proving or disproving hypotheses that they had helped develop.

The program is designed for girls only, and they like it that way, said April Luehmann, an associate professor of education at Warner and founder of Science STARS (Students Tackling Authentic and Relevant Science). It provides them with the equipment and support to explore science in a collaborative setting, she said. The program also is part of the "Get Real! Science" programs that provide classroom experiences for Warner graduate students studying to become middle- or high-school science teachers next fall.

While the girls get to develop their science understanding and skills, the Warner students "are learning to teach science in an exploratory way," she added. The girls presented their findings at the university during a conference held earlier this month.

"Get Real! Science" programs began several years ago, and at the end of each 10-week session, the girls are asked if they’d like to open up the program to boys, Luehmann said.

"It’s always a unanimous no," she noted.

In the video game study, the girls formed teams of two and went to different stations that included having one girl play a short game while the other recorded the time it took to play various levels. Others sat and analyzed charts from previous sessions and took notes in their journals — as important a tool for a scientist as a microscope, Warner student Marshall Hunter noted during the Oct. 21 session.

"As scientists, we want you to record everything you do," explained Hunter, adding that the program also is part of his coursework.

The program plays an important role for girls who participate because studies show that they take a "back seat" in the classroom when boys are present, Hunter said in an e-mail.

"This leads to girls becoming disinterested in science because their voices are not being heard in the classroom and they cannot participate fully in activities," he added. "The STARS after school program is an opportunity for girls in middle school and high school to not only participate in the nature of science, but get to actually do science that interests them."

Eighth-grader Keiry Ortiz said that boys often act immaturely at this age and not having them around creates a more comfortable learning environment.

"We want to show that girls can be good in science too," she Keiry, 12.

In another room at East on Oct. 21, a group of girls worked on breaking stereotypes as they designed wooden model cars and tested fuel power. They had already created and tested the reactions of different sources of "boosting power" by mixing variations of club soda, baking soda and vinegar in film canisters, explained Catyra Smith-Edwards, 12. Some exploded instantly while other explosions were small or delayed, she said.

Catyra said that she signed up for the program because science is interesting and interactive.

"And I like exploding stuff," she added. "That’s fun too."