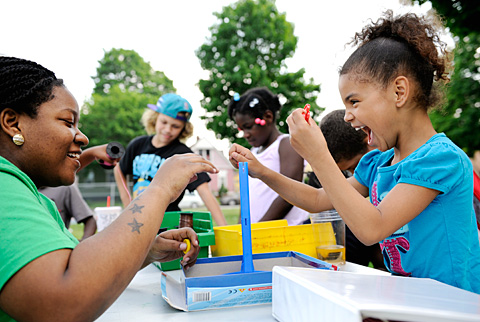 ROCHESTER — The brightly colored sign, "Recreation on the Move," on the side of the city truck serves as a beacon for outdoor fun during spring, summer and fall.

The city program provides outdoor activities, healthy snacks and even homework help for children in neighborhoods not served by a nearby recreation center, explained Jasper Moore, a senior recreation assistant.

For Gloria Alvárez, the program is the right thing for the city to do, said the Puerto Rico native and mother of a 6-year-old daughter and 3-year-old son. She walked over with the children from her apartment across the street from Don Samuel Torres Park on Oakman and North Clinton avenues when the children saw the "Rec on the Move" van at the park on May 22.

"A lot of people who work for the city don’t pay attention to the youth a lot," Alvárez said. "We’ve got to pay more attention … and have more stuff around here. Don’t forget about the poor."

The mobile recreation program’s staff members promote the values of being active and eating healthy during weekly stops Tuesdays through Thursdays at locations on the east and west sides of the city. Activities often include baseball, soccer, basketball, and such arts and crafts as making bracelets and boondoggles.

"We have different locations and groups of kids that we are doing outreach to," said Julian Miles-Foster, also a senior recreation assistant. "A lot of times kids are so focused on video games that they are cheating themselves (out of participating in outdoor activities)."

The games that the staff and children come up with to play on the park fields also require creativity, he said.

"We’re teaching sportsmanship and agility," Miles-Foster said. "Those are tools that will help you out in the long run."

Moore said about 50 to 100 kids ranging in age from 6 to 18 usually come out to every stop. Sometimes, the older kids will turn out for the latter part of the 3:30 to 6:30 p.m. sessions, he added. The program was created four years ago to engage children in positive activities, Moore said, as well as to provide information about other resources available to them including area recreation centers, libraries and other youth programs.

"We’re keeping them out of trouble," he noted. "We may talk to them about their future plans or if they need help with homework. We’re here to answer questions."

When 6-year-old Keirzrha Young heard the word homework, she jumped on her bike to go home and grab her backpack. A few minutes later, she returned so staff members could help her with her first-grade math packet. Her 9-year-old sister, Rai’Aijah Hicks, said that they first heard about "Rec on the Move" from a cousin. The sisters will return anytime the van comes back to their neighborhood, she said.

"I like everything," Rai’Aijah said of the program. "They have fun at the park. … And we can stop laying down on the couch and watch TV. We are getting up and getting healthy."

The program’s health mantra also has gotten through to siblings Luineshka and John Santiago, who live across the street from Don Samuel Torres Park. Both of them returned for a second year of "Rec on the Move" activities, said Luineshka, 12, as she took a break from a game of pick-up softball under the hot sun with several other kids.

"You get to meet new people and play with them," Luineshka cited as one reason she likes the program.

And by playing outside, "you can stay where you are supposed to with your weight and your health," she added.

John, 10, said that he also likes the snacks provided by the staff. His favorite snack is an apple.

"It’s good for your heart," he noted.

EDITOR’S NOTE: For more information or to see the summer schedule for the "Recreation on the Move" program, visit www.cityofrochester.gov/reconthemove.