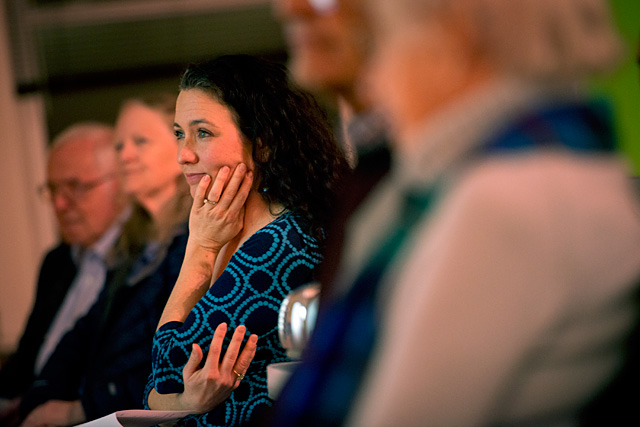 ROCHESTER — Two local college professors are drawing parallels between the early days of Donald Trump’s presidency and the regimes of populist leaders from which they say many Latin American countries have been moving away.

Such leaders, known as caudillos, have been common throughout Latin American history, explained Ryan Jones, an assistant professor of history at SUNY Geneseo. Jones made his remarks during a Feb. 1 presentation, "The U.S. Elections: What They Mean for Latin America," hosted by the Rochester Committee on Latin America (ROCLA).

The event had been scheduled before the U.S. presidential election and was not meant to be anti-Trump, according to Dr. Arnold Matlin from ROCLA, who said he knew the topic would be of interest to many people.

During his talk, Jones said that Trump displays many of the characteristics of caudillos , such as strong-arm tactics behind the scenes and charm in public. Caudillos commonly capitalize on the divide between rich and poor and portray themselves as "being for the little guy," he noted.

"He is a caudillo," Jones asserted of Trump. "It is a particular form of government style … that is oriented around a personality cult."

To demonstrate that they represent the ordinary person, caudillos often dole out patronage and promise jobs as a way of creating dependency on them, Jones explained. They are not committed to a particular ideology other than gaining power for themselves, said Karleen West, a professor of political science at SUNY Geneseo.

"A grand pyramid scheme is essentially what a caudillo is," Jones said, noting that a military coup often follows the decline of such a regime.

The caudillo form of government poses several problems for a nation, Jones said:

* An "us vs. them" mentality fostered among supporters.

* Traditional forms of resistance become ineffective, as devotion to the leader is paramount.

Chávez in particular had a hatred for the United States, another common trait of caudillos, Jones said. Chávez even called President George W. Bush "El Diablo" (the devil), West recalled.

"But his solution for (U.S. capitalism) — a personality cult of caudillo — was not a good alternative," Jones noted of Chávez.

Jones noted that Trump’s swift action in his term’s first 100 days — including use of executive actions, cabinet selections and Twitter battles — are so similar to the actions of a caudillo that a January 26 analysis article in The Washington Post by Ishaan Tharoor called him the U.S.’s first Latin American president, "El Caudillo Yanqui(The Yankee Caudillo)" (http://wapo.st/2klkAKV).

Meanwhile nations in Latin America have been moving away from the caudillo style of government, West said.

Peru, Brazil and Argentina have elected leaders who are either centrist or conservative, she said, and they are scaling back the size of their governments. They also are moving toward market-oriented policies and have shown a willingness to work with the United States, West said.

These changes are causing European countries to look to Latin America as a "beacon of hope" for democracy at a time when the U.S. government has been downgraded from "full" to a "flawed democracy" by the Economist Intelligence Unit — the research and analysis division of The Economist Group, the sister company to The Economist newspaper (http://bit.ly/2ktpbtj) , she added. According to the website, the downgrade was attributed to an overall erosion of trust in government and elected officials.

Latin American leaders "have moved beyond the populist trend and are looking at the United States with a ‘been there, done that’ (attitude)," West remarked. "But we should give pause to the thinking that Latin America is on a better road of democracy." Only time will tell if the current crop of centrist Latin American leaders will not return to "caudillo-like tendencies," she said.

The professors’ analysis of the current U.S. political situation and the lessons of Latin America was helpful information, noted Paola Macas Betchart, a development specialist with the Worker Justice Center in Rochester.

"We don’t want to repeat the sins of the past," said the native of Ecuador. "All Latin American countries need to unite together against any type of injustice."

All Americans, meanwhile, should stay calm and pay close attention to changes being enacted by the new administration, Betchart added.

"Otherwise, they (administration officials) create these shock events and people get distracted and it causes division," she said. "That’s not in our best interest."