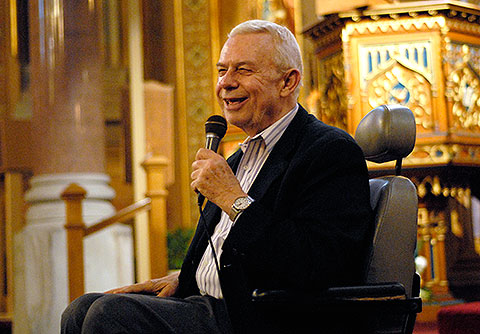 Father Laurence Tracy — described as "A Boricua de corazon" (A Puerto Rican in his heart) — was honored in recent events for his service and support of the Latino community for more than 40 years.

"Father Tracy is loved by the whole community because he is the only shepherd who has loved, cried and who fights for the Hispanic people," said Belen Colón, a parishioner of St. Michael Church who has known the priest since 1966.

Colón was among the hundreds of people who attended two special events earlier this month organized by the Latino Rotary Club to honor Father Tracy for his dedicated service to Hispanics.

But the honors bestowed on Father Tracy are equally an honor for the organizations he has been a part of, Father Tracy said.

"It’s a recognition of all of those who have been involved in service," he added. "The credit is to them as much as to me."

Father Tracy was honored by the Latino Rotary for his lifelong "service above self," which is the club’s motto, explained Diana Hernández as Rotary members worked Oct. 27 under a light drizzle to plant a garden at St. Michael in his honor. Father Tracy also received an award from the Rotary during its third-anniversary dinner on Nov. 3, which was attended by nearly 300 people at The Diplomat in Gates.

A table with the more than 30 plaques that he has received from area organizations was on display during the Nov. 3 dinner. Speakers at various events recognized his work in helping create Ibero-American Action League and bilingual education in city schools.

His most recent plaque came in October when the Rochester City School District presented him with the "community pioneer" award during a Hispanic Heritage ceremony Oct. 25.

"He’s lived in this community his whole life," added Hernández, the Rotary’s president. "He gives of himself. He is selfless. … He has created a legacy that we want to keep alive."

And his service is not isolated to Latinos, but he helps all communities who are in need of advocacy, she said.

"He really has a heart for everyone," Hernández noted. "He is a brother, a coach, a mentor, an organizer and a visionary."

The garden that Rotary members planted alongside St. Michael Church — representing the heart of the Latino community on North Clinton Avenue — serves as the perfect symbol for his ministry, Father Tracy said during the garden dedication ceremony on Nov. 1. During the dedication a Monroe County representative declared it "Father Laurence Tracy Day" to loud applause.

The garden "represents the people I’ve lived with and worked with and served over the years," he said. "They are many colors, beautiful, alive and outside the church. When I was a young priest, I recognized that in the Hispanic community. … All the people had great needs in education, health, jobs, housing. And so that the work of a church and the priest should be outside the church and not stop at the church door."

U.S. Rep. Louise Slaughter even called him a "living saint" during the ceremony, which happened to coincide with All Saints Day.

"He is a true street minister and a model advocate," she said. "The garden will forever be a wonderful reminder of the great work done by a great man in the Rochester community."

And Mayor Thomas Richards said that Father Tracy is admired for choosing to walk the walk of his ministry in northeast Rochester — one of the most challenged areas of the city.

Father Tracy said that his outreach ministry began in those neighborhoods when he was assigned to serve the burgeoning Latino community at Our Lady of Mt. Carmel and St. Bridget churches in the 1960s.

"I’ve gone where the need is," he said. "Service is an end in itself. Jesus didn’t heal people to get them to go to church. As a matter of fact, people do go to church because you’re with them but that’s not the purpose (of serving)."

"He has shown his leadership in trying to build up this community in many different ways," noted Father Mickey McGrath, who led the dedication ceremony in prayer as he sprinkled holy water on the garden and the more than 70 people in attendance.

During the event, he was made an "honorary Rotarian." Additionally, Luis Burgos, the city’s commissioner for the department of recreation and youth services, read a proclamation from the mayor declaring Nov. 3 as "Father Laurence Tracy Day."

In addition to modeling the Rotary motto, Father Tracy lives out Jesus’ words: "I am among you as one who serves," Hernández added.

He first met Father Tracy during a talk that he had been told would be given by a Puerto Rican, Hernández said. That man was Father Tracy, he added.

"You don’t have to be Catholic to love this man," he said. "His goal, his dedication to the community, it could take 10 of us and we wouldn’t equal this man. … If I could only be half the man he is, I would thank God for being Puerto Rican."

Following Hernández’s presentation, Father Tracy joked that he is not sure why he has received so many accolades this fall. Although officially retired, he has not retired from his ministry, he added.

"No one took my place so I’m still doing that outreach," said Father Tracy.

And that outreach stems from Jesus’ words about service as Hernández explained, he added.

"Those are words for all of us who are baptized to be like that," remarked Father Tracy. "To be among the world and serve — that’s what it’s all about. It’s not about getting people to church. It’s about getting the church to come to them."