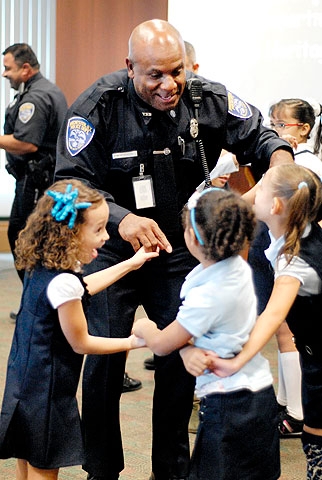 ROCHESTER — Rochester Police Chief James Sheppard sat in the front row as second-graders from Enrico Fermi School No. 17 sang and danced in Spanish as part of a Hispanic Heritage celebration.

But, he didn’t stay seated for long.

Once music played for free dancing, several of the children chose Sheppard as their partner to teach him how to dance salsa, merengue and bachata during the Oct. 2 event at the Public Safety Building.

"We just want to engage them and have the opportunity to let them know that we’re normal guys," he added. "This is fun. And we enjoy it too."

"That’s what this is all about — making connections with young people," Robinson said. "Plus, I need to learn how to dance."

Natasha Banks said that the students were thrilled about coming to perform for the police department. The kids had practiced for more than a week with Banks and fellow teacher Nilda Carmona, she added.

"We had other songs planned but they wanted us to dance with the officers," Banks added. "This is more fun."

And the children had no qualms about asking the officers to dance.

"They were good dancers," said Carmen Benitez, 9. "It was my pleasure dancing with them."