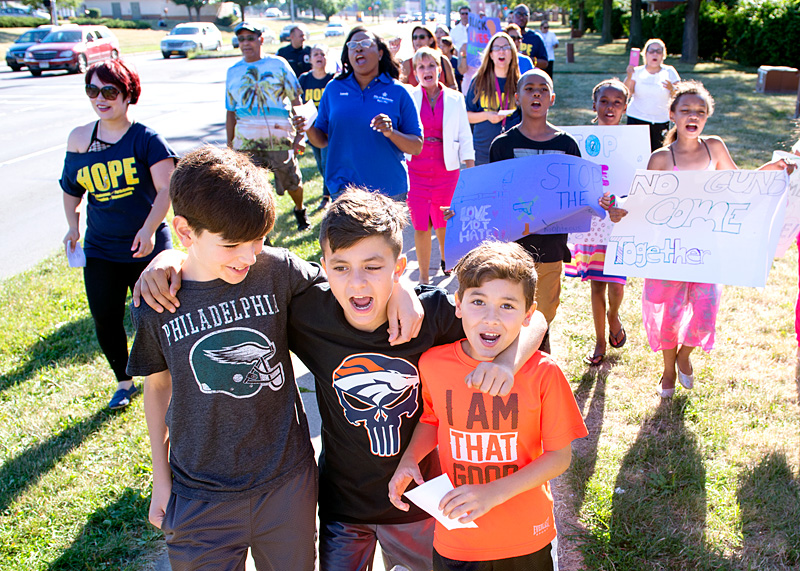 Project HOPE staff and volunteers will lead a march calling for peace in the northeast neighborhoods they are working to improve.

ROCHESTER — Two events this month called for peace and unity in northeast Rochester and throughout the Latino community.

An Aug. 2 Peace March was part of a series of community walks organized by Project HOPE staff and volunteers. The last march was held in 2014 to support urban youths, noted Sacha Rios, a community organizer with Project HOPE, a neighborhood revitalization project created by Ibero-American Development Corp. with funding from the Greater Rochester Health Foundation.

Rios said she decided she needed to organize another walk when she awoke recently with a feeling of anxiety from the almost daily bombardment of news reports of violent crimes or murders in the city.

"I just got tired," she said. "I had to do something. And any change would begin with us. When we unite, we can overcome."

More than 30 people walked from Don Samuel Torres Park to the Gantt Recreation Center on North Street carrying signs and shouting, "We want peace. When do you want it? Now." The march coincided with National Night Out activities at the center to encourage residents in urban areas to get involved with their communities’ children and youths in a safe setting.

Sacha Rios of Project HOPE uses a megaphone to lead a peace chant.

On Aug. 3, the Puerto Rican Parade of Rochester held a rally, also at Don Samuel Torres Park, calling for peace, prayer and unity during the upcoming Aug. 6 parade and the 47th-annual Puerto Rican Festival Aug. 5-7 at Frontier Field.

Alijah Desmore, 13, said he marched with his grandmother and other relatives to show the city that the neighbors want people to stop fighting and shooting each other.

The march "shows people that we can do better," he said. "We can improve the city of Rochester and have no more violence."

Prior to walking with the marchers to the Gantt Center, Mayor Lovely Warren said Project HOPE is an important partner in combating the violence that continues to plague the city. She has worked with the group since she was a City Council member representing the city’s northeast sector. Warren said the organization’s director, Miguel Meléndez, and the staff are doing an exceptional job in reaching out to residents about ways to improve the community.

"When you talk about community engagement, Miguel … and his team are really the experts going door to door talking to residents, talking about their concerns," she said. "When you get that perspective, you have a different eye view on what needs to be done. It is organizations and leadership like Miguel (and Project HOPE) that allow us to be a support in changing what’s on the ground in neighborhoods."

Rios said Project HOPE hopes to collaborate with other groups around the city to continue marching for peace.

"East supports west and west supports east," she said. "We want to spread the love."