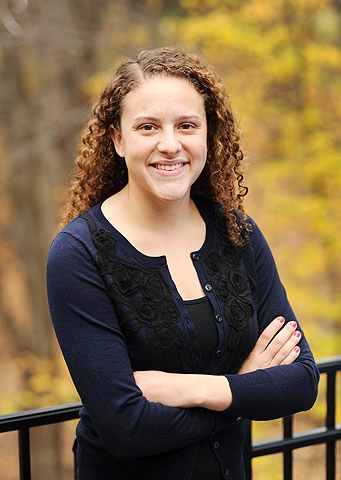 PENFIELD — Brandy Soublet is a warrior.

But the Our Lady of Mercy High School graduate didn’t even consider a career in the military until she overheard a conversation a friend was having early on in high school, and the seed was planted.

"I (had) never even heard of the Naval Academy," noted Soublet, 24. "And so I did a little bit of research, and it was like this is definitely something that I want to do. My father sent me to soccer camp there as a sophomore in high school just to get me down there; get me to see the campus. And it was like love at first sight."

Her trajectory from high school to U.S. Marine Corps first lieutenant was highlighted during a video presentation at the Latinas Unidas Reconocimiento Awards luncheon late last fall. Soublet said that she recalls being surprised and honored to receive the award in high school. Her cousin, Roberto Burgos, said that he had nominated Soublet because he could see she was a "trailblazer" who also served her community and was respectful and humble.

"Being recognized for (leadership), it was kind of a boost," she added. "And that kind of gave me a lot of confidence going into the academy, where leadership is such a big deal."

Soublet also recognized that she liked structure and organization, and such traits are well-suited for a Marine Corps officer, she said. Her junior varsity soccer coach at Mercy said that she agrees Soublet and the Marines were a perfect match.

"I would describe Brandy as a leader both on field and off the field," added Donna Troust, now Mercy’s varsity soccer coach and history teacher. "She would do things and lead by example. Others would see that and emulate what she was doing."

More important than Soublet’s skills on the field was her positive attitude even when she was on the bench, where as team captain she would rally the team to victory, Troust remarked.

The physical and mental toughness that Troust saw on the field also was evident during provisional infantry platoon commander school and leadership training, said Cpt. Christopher Upton, who supervised her training at the Basic School in Quantico, Va., over a six-month period that concluded in December.

"In total, I would estimate she did nearly 60 miles of total hiking with upwards of 75 to 80 pounds of gear on her back," Upton said. "She was able to complete all of these conditioning hikes with no assistance."

Upton described the physical aspect of the training as "nothing short of exigent." He explained that Marines use the crawl, walk, run methodology to train newly commissioned officers.

"Throughout the program of instruction, she had multiple field exercises where she would average about four hours of sleep a night if she was lucky," he added. "All told, Brandy was hands down the most dedicated Marine in the platoon. Her ability to overcome the physical challenges spoke volumes to the character of this Marine."

"It’s been the most physically demanding experience of my life," said Soublet during a Nov. 26 interview at her parents’ Penfield home. "Everybody says that your mind will give up before your body does. So if you can put it out of your mind, you can block out the pain."

That drive to be the best she could be was instilled by her dad, who would ask if there had been a bonus question when she would have scored a 100 on a test, she said jokingly.

"My parents worked tirelessly just so they could send us to great schools here in Rochester," said Soublet, the daughter of a Cuban immigrant and a Puerto Rican native who met in Rochester.

That good academic foundation provided the opportunity to not only enter the Naval Academy but to go on to be the first in her family with a master’s degree. So upon graduation from the academy in 2009 — a ceremony highlighted by a keynote address by President Barack Obama, who also handed her a diploma — Soublet obtained the OK to defer her service to pursue a master’s degree from Penn State University in material science and engineering, which she completed last year.

Soublet now moves on to the next step with her assignment to a California-based logistics unit and has yet to learn where she will be deployed. That deployment could put the unit on a naval ship, where the officers would be allowed to explore exotic ports of call — including Singapore, China and Japan — once docked, she explained.

"I try to tell people, it’s got its moments," Soublet said of military life. "The opportunities I’ve been afforded being in the military have been so fantastic, especially traveling."

As part of the 12 percent of female military officers in the U.S. Marines, however, Soublet does not discount that being a women could have proved challenging, but it hasn’t been thus far, she said.

"I threw myself from an all-girls institution to an all-males institution," she said with a laugh. "It’s funny because I didn’t even notice the difference. … It’s always a fight to prove ourselves (as equals). But being an athlete, I was pretty strong physically and so I was able to keep up with the guys."

Soublet also possesses a charisma that has and will continue to serve her well, noted Upton.

"She is indeed a role model, not only for women, but for all," he remarked. "What Brandy brings to the table is a dedication that will carry her far in the Marine Corps as well as in her life."