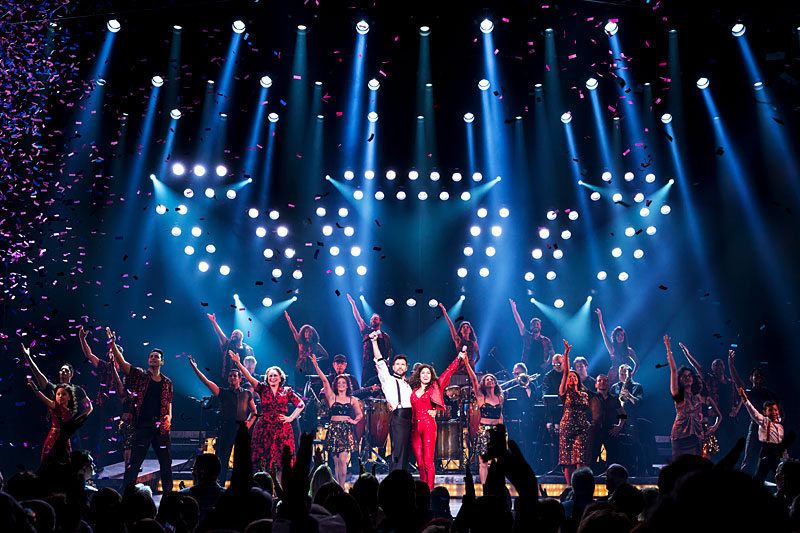 Company of the National Tour, ON YOUR FEET!

ROCHESTER — A collaboration between the city’s Recreation and Youth Services department and Rochester Broadway Theatre League hopes to get youths and their families moving and living healthier in anticipation of the upcoming production of “On Your Feet!”

As part of the collaboration for the musical that tells the story of musicians Gloria and Emilio Estefan, RBTL and the city also have partnered with Anthony Jordan Health to provide a health fair next month as well as tickets to the show, which runs from Feb. 6-11, said Annette Ramos, RBTL’s director of community engagement.

Annette Ramos of the Rochester Broadway Theater League asks Daphne Clinton about the Gloria Estefan song “On your Feet” as she talks about the upcoming musical at the David Gantt Recreation Center on Jan. 11

The show’s themes of determination, resilience and the importance of family should resonate with Rochester residents, she said. Gloria and Emilio Estefan are Cuba natives who started Miami Sound Machine, and Gloria is a recent recipient of the Kennedy Center Honors, Ramos said. The show even has a local connection, as Gloria Estefan suffered a near-tragic accident on the way to a show in Syracuse and she worked tirelessly to recover, Ramos said.

“She broke her back and couldn’t talk, let alone sing” after the accident, which features prominently in the show, she noted. “The message of her life and her American dream is the immigrant story once again. … She’s iconic.”

RBTL and city officials are hoping the Estefan story will inspire a young generation of local Latinos and decided to host a health fair on Feb. 3 at the Avenue D Community Center, Ramos said. The event will include healthy snacks, zumba with music from the show, health screenings, and information about dental care, blood pressure, diabetes and mental health, explained Eric Rose, the city’s assistant commissioner of Recreation and Youth Services.

Additionally, beginning in January, the recreation department will host a series of one-hour workshops led by RBTL and city recreation staff using a customized curriculum related to the show’s themes, including healthy living, wellness and perseverance, Rose said. As part of this collaboration, recreation department staff members receive professional development and information on the basic tools of theater art, Ramos said.

Creating such partnerships between the recreation department and theater companies first began several years ago with Rochester Latino Theatre Co. during its “West Side Story” production, Rose said. And the “On Your Feet!” workshops follow on the heels of a successful collaboration for the “Hip Hop Nutcracker” show in December that taught youths drama and the history of hip-hop music, he added.

Also youths and staff members involved in such community collaborations receive tickets to the shows, including 200 tickets for “On Your Feet,” with the city providing the busing and transportation, Ramos said.

“It’s great to have the consistency of performers involved with passionate youths interested in theater,” Rose said. “It’s a great opportunity for them (students) to learn from the pros.”

The next step in the collaborations is to study the positive effects of these programs on the youths in terms of school attendance and academic achievement, said Rose and Ramos.

“We know it’s a contributing factor, but we want to document (with numbers)” what the impact is, Rose said.

For the upcoming musical, about 200 students from the Rochester City School District also will have the opportunity to attend the show and have dinner beforehand at the Auditorium Theatre, she said.

Joseph Rivera, a member of the touring show’s ensemble, said he hopes many Latino youths come to the show and feel a greater sense of pride for their culture. He is proud to be part of a cast that is nearly 100 percent Latino, Rivera added.

“I want them (students) to see that our culture is being represented in theater, in movies, and in America more and more,” he wrote in an e-mail. “I also want them to walk out, go home and bring the conga home with them and spread that fun energy with everyone they know.”

His own story might even provide some inspiration, as he only began dancing 12 years ago as a senior in high school, said the native of Santurce, Puerto Rico. Musical theater came later after working several years as a dancer, he said.

“I’m glad I never stopped working hard,” he said. “Gloria Estefan is a staple in most Latin homes for music. I remember listening to her music growing up at family functions and parties. It’s such an honor to be here representing her legacy. … Her journey and success is one of perseverance and struggles, but in the end, love. Love for your family and love for your people and culture.”