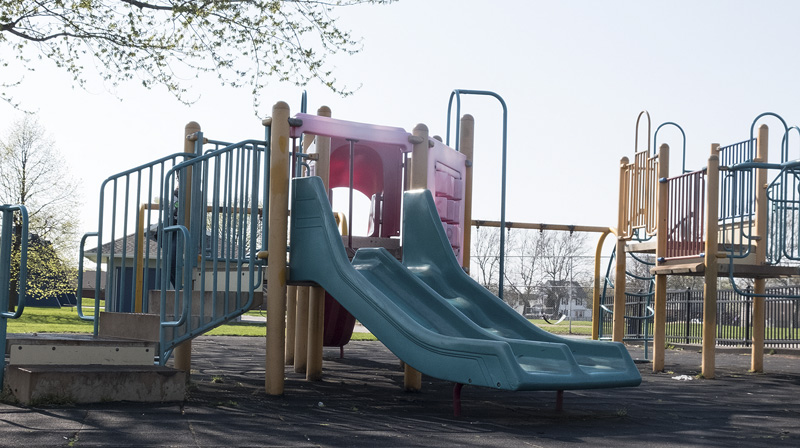 ROCHESTER — Children in Rochester are less physically active than kids across the country, according to a report released last year, and several organizations have joined forces to get more kids moving.

Jim Boyle, vice president of programs and communications for the Ralph Wilson Jr. Foundation, said his organization commissioned a study on the “State of Play” for the communities it serves in the Buffalo and Rochester regions as well as southeastern Michigan. The report showed that only 12 percent of children in Rochester and 14 percent in Buffalo are active to levels considered acceptable by the Centers for Disease Control, as compared to 27 percent of children nationwide.

“The short story is our kids are not active nearly enough to be healthy both as kids and to form healthy habits into adulthood,” Boyle said.

To change the path for these children, the Wilson Foundation has partnered with the Tony Hawk Foundation and KaBOOM!, a national nonprofit organization that builds playgrounds. The two organizations plan to create innovative play spaces and skate parks in underserved, low-income areas with input from its community members on the development of uniquely designed spaces, Boyle explained. The projects will be funded with an investment of up to $5 million in each region from the Wilson Foundation over the next several years, as the foundation works to provide support to grassroots groups and nonprofits — such as minor league baseball teams — to create and maintain play spaces within their neighborhoods, he said.

Over the next several months, KaBOOM! and the Tony Hawk Foundation will engage potential applicants in all of Wilson’s region to guide them through the process of designing a skate park or play area and steps to create these spaces. A rolling application process that began earlier this month allows for a community’s residents to design play spaces and skate parks, he added. The Tony Hawk foundation matches up to $250,000 for a skate park. Construction of some of the play areas will start as early as this fall, Boyle said.

Prior to this effort, the Tony Hawk Foundation helped build more than 500 skate parks in all 50 states, noted Miki Vuckovich, the foundation’s executive director. KaBOOM! has built more than 3,000 playgrounds throughout the country, said Amy Lavner, vice president of marketing communications at KaBOOM!

Lavner said that Built to Play fits in with KaBOOM!’s latest “Play Everywhere” model. This model, she explained, provides play spaces in unexpected areas — such as a swing set at a bus shelter, or activities offered outside a Laundromat or on a sidewalk — as well as provides bigger play spaces with new equipment and helps to build play equipment in open fields or vacant lots.

A lack of access to play areas is one of the factors attributed to the lack of physical activity among children in underserved areas, especially for families who also face financial hardship, noted Simeon Bannister from the Rochester Area Community Foundation. In Rochester, the lack of activity is exacerbated by high child-poverty rates and disenfranchised residents, he added.

“In our community … there are folks in neighborhoods who do not really have access to high-quality play areas,” he said. “And they don’t have the capacity or the opportunity to be able to travel. (Those factors) create a real different set of circumstances this (initiative) in part helps to triage.”

In 2016, RACF collaborated with the Wilson organization on the State of Play report, which revealed the disparity in access to play spaces in Greater Rochester and the Finger Lakes, he said. The report was released last fall.

Neighborhood safety is another concern for residents of lower-income neighborhoods, Lavner said.

“Kids will often be in front of screens, where parents feel they’re safe, which is why play space becomes even more important,” she said. “If we want kids to be active, which is for them to be in their natural state, making sure they have places to play is really important.”

By engaging communities in creative play solutions, the organizations can ensure that children will use them, Lavner added. In other areas of the country where similar initiatives were undertaken, gang members rallied and helped build a playground and then provided security, she said.

“We want to make sure kids have a place to be kids,” she said. “What we like about what they (Wilson) want do is that they are focused not only on kids having access to play, but providing a legacy and inspiration for others to follow their lead.”

As part of the Built to Play process, RACF connected Wilson staff with local agencies, groups, residents and youths via community meetings held in the last several months. The discussions offered insight into the kinds of play areas that should be created and where they should be located, Simeon said.

“We really are trying to let data and the community lead,” Boyle said. “We want community to be super involved in the process. We know if they don’t (engage), no one will use the park once built. Engagement work …is paramount to success.”

As part of the Built to Play initiative, kids also learn about the application and approval process for such skate parks in their municipalities, Vuckovich said.

“Seeing the process and participating really helps them to appreciate the result of the skate park itself,” he added. “The sense of stewardship and ownership is important to long-term success.”