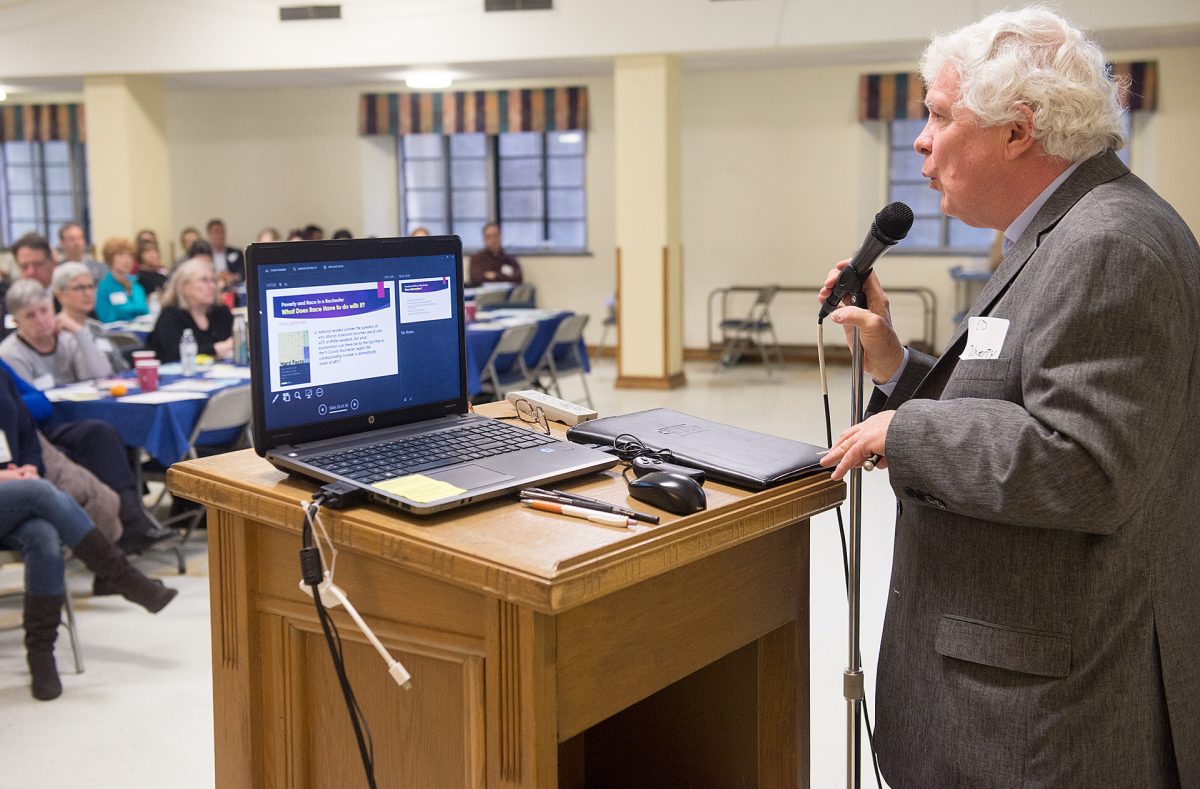 Author of “Hard Facts: Race and Ethnicity in the Nine -County Greather Rochester Area” talks about the substantial gaps the persist in educational and economic outcome among persons of different racial and ethinic backgrounds during a workshop on Jan. 11 in Rochester. Courier Photo by John Haeger.

ROCHESTER — As ACT Rochester officials prepared last summer to release a report showing persistent disparities in health, housing and educational achievement across racial and ethnic lines, local community organizations announced that 2018 would be a yearlong commemoration of the bicentennial of the birth of Frederick Douglass.

The timing could not have been better, noted ACT Rochester’s Ann Johnson during a Jan. 12 workshop at Asbury Methodist Church in Rochester on the organization’s report, “Hard Facts: Race and Ethnicity in the Nine-County Greater Rochester Area.”

“What better role model (than Douglass), who was focused on social reform and was an amazing orator and an abolitionist?” Johnson asked rhetorically. “He used his head and used his heart as he pushed forward for his causes. He spoke carefully and articulately, and he listened.”

Listening and gathering ideas on how to address disparities identified by the ACT Rochester report was the goal of two recent community workshops held on Jan. 11 and 12, Johnson explained, which included discussion among small groups of participants at their tables. The Hard Facts report is the latest in a series of reports — all previously focused on poverty — by ACT Rochester, a joint initiative of the Rochester Area Community Foundation and the United Way of Greater Rochester. It examined nine New York counties surrounding Rochester: Monroe, Wayne, Livingston, Genesee, Ontario, Orleans, Seneca, Wyoming and Yates.

“This data is very much at the heart of the very many issues that hold us back as a region,” said Ed Doherty, the author of the report, which is available at http://bit.ly/2E2gxiS.

The workshops were important as first steps in confronting the report’s findings by raising awareness and facilitating a community conversation, he and Johnson said.

“These disparities begin at birth and continue on to future generations,” Doherty said.

While Rochester residents may believe that they are above the national average on a range of issues, the facts dictate otherwise, he said.

Noting that Rochester currently has the fourth-highest rate of poverty in the nation, Doherty said the report shows the city’s overall ranking would improve to 17th highest if poverty statistics on Rochester’s people of color were comparable to those of their counterparts in other parts of the country.

“These results impact us all,” Doherty said. “That’s a critical reality. They impact the competitiveness of the region and impact the kind of life that we live.”

The report shows that:

• Incomes for area African-Americans and Latinos are less than half of what white people.

• While overall homeownership is higher locally than nationally (68 percent vs. 64 percent), African-American and Latino families in this area lag their counterparts nationally with rates of 33 percent and 35 percent, respectively, here compared to 42 percent and 46 percent nationally.

• For every 1,000 live births in Monroe County, 10 African-American babies will not survive past age 1 in Monroe County compared to a county rate of 3.6 for white babies and 4.2 for Latinos.

• Only about 19 percent of Latino students and 13 percent of African-American students in the nine-county region can read by third grade, compared to 47 percent of local white students and 45 percent of area Asian students. Grade 3 reading level is cited as a critical milestone that indicates that a student will be able to “read to learn” in later grades.

“Our system for children of color is not working at all,” Doherty said. “What can account for African-American and Latino children achieving so much lower? … I hope somebody knows, because I don’t.”

This is one of many questions the community needs to find answers to, he said. Since the focus placed on poverty over the last two years through the Rochester-Monroe Area Poverty Initiative, some improvements have been seen in school attendance rates among city students, but overall poverty indicators have remained stagnant.

“Any progress we see is about the community mobilizing and the community attempting to improve what we do to better our outcomes,” Doherty said. “The changes we need to pursue is not about tinkering around the edges. They’re structural.”

He encouraged workshop participants to consider how they can become more engaged in their own spheres of influence, whether political, in their companies or organizations, or in the communities where they live.

Disseminating the report’s findings in a workshop format helped participants to discuss and then share what they learned, said Yversha Roman, coordinator of the Latino Leadership Development Program of the United Way of Greater Rochester.

“At times, reports like these come out with little to no public dialogue afterwards,” she said. “The workshop allowed for me to better understand the report and the dire realities of our nine-county region. It was disheartening to see the realities faced by people of color within our community.”

The people at her table discussed ways to act in their homes and workplaces to raise awareness and spur others to action.

“We have to continue to have open conversations about why this is happening and how we as a community can really work toward allowing everyone an equal opportunity to thrive,” Roman added.