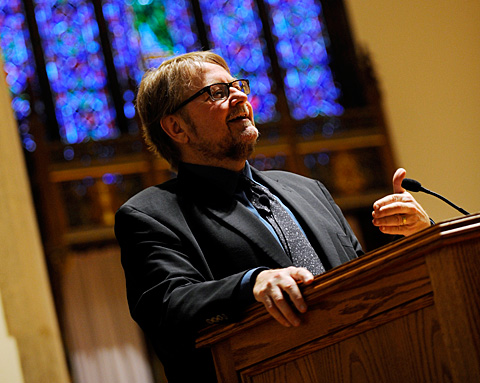 PITTSFORD — Author Luis Alberto Urrea was looking for a change of pace after writing The Devil’s Highway: A True Story, his investigation into what happened to a group of 26 Mexican men who crossed the border in Arizona with only 12 survivors.

"The Devil’s Highway is such a dark, violent book," he said during a March 21 phone interview. "It made me feel so hopeless and sad. So partially when I started working on Into the Beautiful North, I wanted to laugh. I wanted to write a book that makes me laugh every day. And it started shaping up into a real story."

Urrea visited Rochester at the end of last month as part of Writers & Books’ 13th-annual "If All of Rochester Read the Same Book." He kicked off the weeklong series of talks at Nazareth College on March 27 and described the back stories of the characters in Into the Beautiful North. He said that most of them were based on relatives and residents of his family’s village in Mexico.

The book tells the journey of three young women and a young, gay man from the fictional Tres Camarones and how they cross the border into "los Yunaites," — the United States — to recruit Mexican men to travel back to their town and protect them from the "bandidos" who have taken over their small town. Their adventures in the book include run-ins with Border Patrol agents and a cross-country road trip in search of a father who left to find work and never returned.

Writing the book "was a chance to display the humanity (of Mexicans) for Americans who deny they are human," Urrea said. "People forget that we’re all human beings. And human beings are funny. And oh my God, Mexican people are actually proud — we have to fight that endless propaganda of dehumanization."

He added that he began writing the book at the height of anti-immigrant rhetoric that was sweeping the country several years ago and that continues to the present with the debate about immigration reform.

He said that Into the Beautiful North is a story of battling that rhetoric by painting a picture of the rich Mexican culture in which he was raised. Urrea was born to an American mother and Mexican father and traveled back and forth from Tijuana to San Diego throughout his youth.

The book also is a story of love, as so many of the characters are an homage to family and friends who he grew up thinking were the most "magical … people I still have ever met."

"How can people who are so beautiful in a culture that is so beautiful … suddenly be so subhuman? My work is an attempt at reconciliation. … And one of the rules I tell my students is humor is a virus that affords us with humanity. If you sit with somebody and laugh or weep, you will never see them as subhuman," said Urrea, a professor of creative writing at the University of Illinois at Chicago.

In choosing the annual book selection, the staff of Writers & Books look for stories that have such wide appeal and provide a narrative that provokes discussion of social issues, explained Karen vanMeenan, director of special projects.

"The issues of immigration and border culture raised by this book were definitely a draw," she added. "This is a conversation we as a national community have been having for so long — and more heatedly in the last handful of years. It is an issue we thought could result in informative and honest discussions on these issues of difference and community."

The book also shows that people look to go to another country for all kinds of reasons from necessity to adventure, but Americans get one-sided in their thinking, noted Leslie Locketz of Rochester, who attended the Nazareth College discussion.

"There’s always something we’re looking for … to find wholeness in ourselves," she said.

Beyond the immigration perspective, one reviewer complained that the Mexican characters in the book speak too much Spanish, Urrea said with a laugh. Although the book’s English version is sprinkled with Spanish, he said that he felt as he was writing that the context usually explained the meaning of those phrases.

"But it’s not going to hurt anybody to hear some Spanish," he noted. "And this is a novel in large part about displacement and feeling alien and a little lost. So, it doesn’t hurt you to lose your bearings for a word or sentence. It gives you a mild version of what they’re (the book’s characters) experiencing."

And those migrant workers who identify with the weariness experienced by the book’s Mexican travelers often approach him at book readings or discussions around the country, he said. Such encounters have been so rewarding, he said.

"I’m so happy," Urrea said. "Honestly, a lot of times people cry when they come to me and start telling me their story. They thought nobody cared or that anybody would try to make art of their secret. That touches me so much."