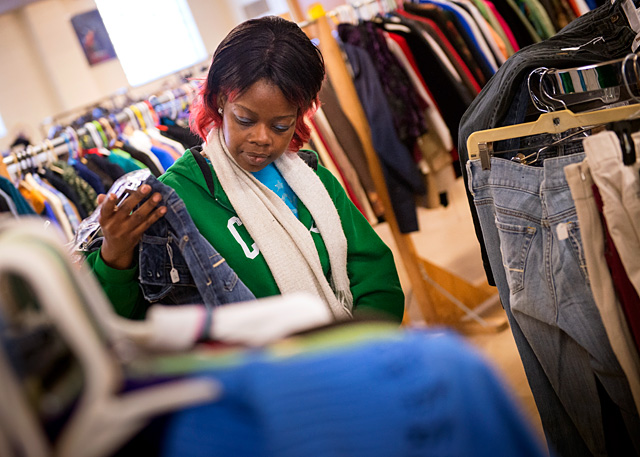 ROCHESTER — For more than 25 years, Matthew’s Closet has been following the Gospel call to clothe those in need, keeping the ministry alive even after going bankrupt more than a decade ago.

Equally significant, the people who work and volunteer there are helpful and kind to anyone who comes in, said Stacey Rosado-Santiago of Rochester, who received bags of clothes for her three children ages 3 to 9 on Nov. 10.

"They provide awesome clothing for kids," she said. "And the people who work here are very nice. If you need help, they help you out and help you look through the clothes."

Matthew’s Closet, which is part of St. Frances Xavier Cabrini Parish and located at 316 Bay St., also is a recipient of funds from the annual Catholic Courier/Catholic Charities Christmas Appeal.

The 47th-annual appeal began at Thanksgiving and runs through the end of February 2017. Organizers hope to surpass this year’s $45,000 goal as they did during the 2015-16 appeal, which raised $43,000, according to Karen M. Franz, general manager and editor of the Courier and El Mensajero Católico newspapers. Proceeds support the emergency funds of Catholic Charities offices and affiliated agencies throughout the diocese.

Matthew’s Closet will receive part of a $3,000 Hunger Relief Grant made to the parish, according to Marvin L. Mich, director of advocacy and parish social ministry for Catholic Family Center which administers the grants. The hunger grants are funded by proceeds from the Christmas Appeal and Operation Rice Bowl.

Paul Robinson, director of Matthew’s Closet, said he usually uses the closet’s allocation of $500 to buy new socks and underwear for the people the ministry serves. With a budget of $43,000, the ministry raises another $30,000 from the sale of clothing, with the balance of funding coming from donations and tithing by local parishes, he said.

Robinson said the ministry, which was begun by the former Corpus Christi Church (now Our Lady of the Americas) originally was staffed by three full-time employees and subsidized by the parish when it first opened in 1991. Changes at the parish several years later led to a decline in financial support, however, and Matthew’s Closet quickly used up its budgetary reserves, he explained.

The ministry’s board of directors was forced to shut down in 1999 and file for bankruptcy, added Robinson. The church and volunteers raised $25,000 in a month and reopened the Saturday after Thanksgiving that same year, he said. Staffing costs were reduced from $68,000 pre-bankruptcy to $28,000 annually to allow for the ministry to operate four days a week to continue serving the community, Robinson added.

His wife, Bea, became the first paid staffer after the reopening, and a comanager was later hired. Dottie Bloss is the current manager. The rest of the staff is made up of volunteers.

After the bankruptcy, Robinson said he also set up a simple requirement for patrons to receive free clothing — a referral letter from a social services, government or community agency. Anyone with a letter receives a clothing allocation, such as eight shirts or blouses per person, and may return to the store to purchase additional items at a discount, he said.

Clothing items, which also are available for purchase by the general public, cost $1 or $2 each, he said.

Donations of used clothing is supplied by several area parishes and individual donors. St. Catherine of Siena Church in Mendon has even built a shed on parish grounds where clothing donations are dropped off by parishioners and community members. Several parish families volunteer for two-week slots to deliver the donations to Matthew’s Closet, Robinson said.

Sometimes, volunteers make four or five trips — about 40 miles round trip — to Matthew’s Closet in a two-week period, explained Sallie Dakins, who coordinates the shed ministry at St. Catherine.

The parish never has a shortage of volunteers, and families with youngsters especially appreciate the opportunity to educate their children about life outside Mendon, she said.

"It’s just a matter of … being able to do something for people not as fortunate as we are," Dakins said of volunteering to help Matthew’s Closet.

Matthew’s Closet also relies on such parishes as St. Joseph in Penfield, St. Louis in Pittsford and Our Mother of Sorrows in Greece as well as individual donors and its many community volunteers, Robinson said.

One Penfield family that wishes to remain anonymous also puts together toiletries kits that are given to clients, he said. They deliver about 100 bags at a time, he said.

"If we didn’t have volunteers, we wouldn’t be here," he remarked.

As she sorted donations at the ministry on Nov. 10, Mary Christopher, a parishioner of St. Kateri Tekakwitha in Irondequoit, said she considers her volunteer work at Matthew’s Closet as her corporal work of mercy.

Marti DeRoller, who was sorting clothes with Christopher and Bernice O’Sullivan on Nov. 10, said she had been shopping at Matthew’s Closet one day 12 years ago when she heard Robinson say he needed volunteers. She has been helping the ministry since then.

"I like the people and the message — if you wouldn’t wear it, don’t put it out," she said of the sorting process. "The way (Matthew’s Closet) is set up like a boutique, that keeps people’s dignity."

"I really think they treat everybody with respect," O’Sullivan added.