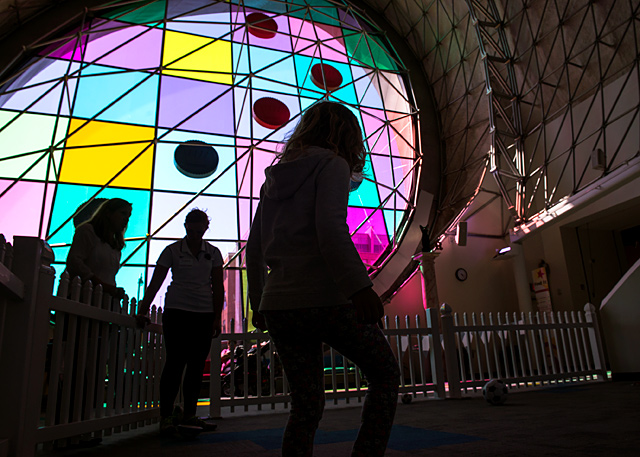 Children play inside of Rochesters Strong Museum during a Soccer Weekend April 23, 2016.

Family "staycations" — time off spent in one’s hometown or nearby cities — have become a trend in recent years as a way to save money, local travel and recreation planners noted.

"The staycation trend began in 2008, when the recession was going on, as well as record-high gas prices," explained Lindsay Hawkins, a communication specialist with AAA Western and Central New York. "It just wasn’t financially feasible for many families to pack up and go away on vacation."

Because of the downturn in the economy, parents started to look at their own communities for sources of family activities instead of spending money on travel, concurred Debra Ross, publisher of the website KidsOutandAbout.com, which offers information on family resources throughout the area.

According to a U.S. Bureau of Labor Statistics report that studied travel patterns from 2005-15, both domestic and international travel decreased during the recession, which officially lasted from December 2007 to June 2009 (http://bit.ly/2rRKU5T). This decline continued during the five-year recovery period that began in 2009 as anxiety about the economy persisted, even though international trips experienced a temporary rebound in 2011 and domestic trips in 2012, according to the report.

Most forms of vacation travel stalled during the summer of 2008 as gas prices reached a high of $4.25 per gallon, Hawkins noted. While gas prices have since dropped — averaging about $2.60 in the Rochester region — transportation costs for driving or flying still represent a large portion of money that families spend on vacations, according to the labor report.

So while AAA has seen a rise in the number of families taking vacations due to lower gas prices, lower unemployment rates and a rise in disposable income since the recession, transportation travel costs remain prohibitive for some families. Thus, staycations remain a popular alternative for families, Hawkins added.

After the recession, the Rochester area responded by offering a wide variety of opportunities for families taking staycations, said Ross, who since 2001 has been measuring trends of how families spend time in their local communities. Her research began in Rochester and has since expanded to cities throughout the country.

"As a result, there are more things to do per child here than anywhere else in the country," she said. "This means that staycations in Rochester are not only easier on a family’s budget, but no one here feels that they are missing out on family fun."

As well as being cost-effective for families on a budget, staycations also offer a potential financial boon to local economies when people on staycations participate in local activities or decide to try new local restaurants, according to information at creditinfocenter.com.

Local activities in the western and central New York regions provide a variety of options, especially in the summer, for families planning a staycation, noted Hawkins and Ross,

"Beaches like Ontario Beach or Sodus Point or spraygrounds are great ways to cool off, and amusement parks like SeaBreeze and Darien Lake are always popular," Hawkins said of several Rochester-area attractions. "Of course, Strong National Museum of Play is always a great time, and for those looking to get out of the city, Genesee Country Village is fun to explore."

Rochester residents also are fortunate to live near the cities of Buffalo and Syracuse and such Finger Lakes locales as Canandaigua, she added.

"(Those are) places where you can take day trips and explore outside of Rochester without having to pay for a hotel," Hawkins remarked. "You can find many activities that are fun for the whole family that are also affordable, between festivals on the weekend, parks and other area attractions."

Many road trips require a tank of gas or less, according to http://rochester.beyondthenest, an online guide for activities throughout the area. The site also offers ideas for day trips, which include several state parks such as Letchworth and Stony Brook.