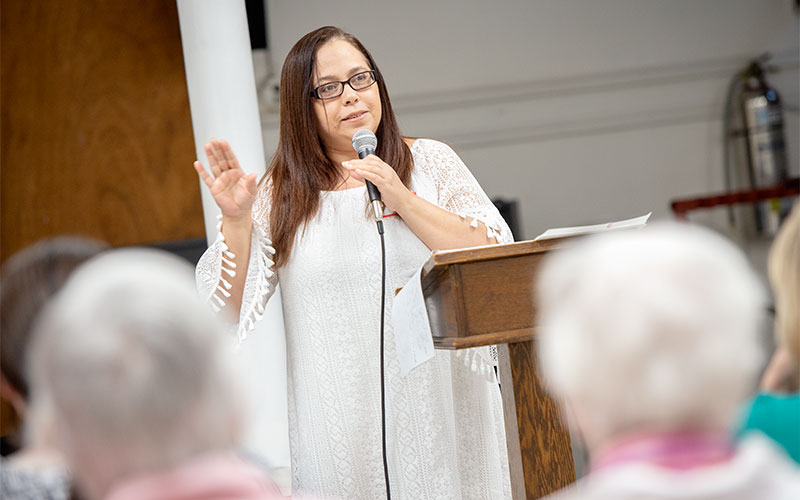 Virgen López speaks on her experience following Hurricane Maria and her decision to flee the island during a May 9 event at Our Lady of the Americas Church in Rochester.

ROCHESTER — As members of the body of Christ, St. Frances Xavier Cabrini Parish’s peace-and-justice committee members wanted to put their beliefs into action.

As part of walking the walk, the committee invited community members who were refugees and displaced individuals from Puerto Rico to speak about their experiences to promote awareness and understanding, said Gloria Fangione, a member of the parish’s committee. The May 9 event was held at Our Lady of the Americas Church, which is one of St. Frances Xavier Cabrini’s worship sites.

“We are the body of Christ,” Fangione said. “If we believe that as we do, that really forces us to look at people in a whole new light and in a welcoming way. I want us to be able to go out into the community and share their stories.”
Virgen López shared her journey living through two hurricanes and leaving her home behind in Puerto Rico. In the aftermath of Hurricane Maria, many people outside the island forgot that Puerto Rico had already been hard pressed for resources after they had been helping displaced residents of other nearby islands after Hurricane Irma, she said.

“It was horrific,” López said of surviving back-to-back hurricanes. “We didn’t have much for everybody. And having more people with us (on the island), it was a little hard.”

Her family endured 51 days without power, she said, but they were able to feed themselves every day. When she and others went out to help the people in the central part of the island, however, the magnitude of the damage overwhelmed her. If families lived by a river, the water was up to the ceiling in their homes, she explained.

“We were trying to help. but it was too much,” López added. “We felt we could do nothing. We felt like our hands were tied in the back.”

The experience propelled her to move to Rochester to be near her oldest daughter, who is studying at the University of Rochester, and find a teaching job here to better support her husband and younger children in Puerto Rico.

“I didn’t know how to ask for help,” she said, noting that she slept on an inflatable mattress in her daughter’s apartment.

Eventually, she heard about Ibero-American Action League and found herself at the multi-agency resource center that Ibero has operated weekly for the past several months at Our Lady of the Americas. After applying for several jobs, the agency hired her to teach for its prekindergarten program at its Family Center on Clifford Avenue.

López is one of the 5,000 displaced residents who have found their way to Rochester, explained Julio Saenz, Ibero’s chief communications and development officer. At a recent state conference, he learned that 85 percent of those residents plan to stay in Rochester.
“A lot of people are here because they had family here,” as in López’s case, he said. “They are going to be our new neighbors here.”

To help new arrivals to Rochester who are refugees or displaced individuals is the work of Mary’s Place Refugee Outreach, its executive director, Charlsey Bickett, explained during the May 9 event.

The refugee population in Rochester mostly comprises people from Somalia, Bhutan and the Congo, with a few from Syria, Afghanistan and Iraq, she said.

The global refugee population totals about 65 million, she said, with one-third forced to leave their home countries and two-thirds forced to flee their homes and live in refugee camps in their countries. Only 1 percent of refugees are permanently resettled in another country, a statistic that is lost in the U.S. debate about a travel ban for refugees from majority-Muslim countries, Bickett noted.

Many of the refugee families served by Mary’s Place have lived in refugee camps for 10 to 20 years prior to being resettled in the Rochester area, said Bickett, noting that the application process for resettlement can take up to two years.

“Refugees are the most highly vetted immigrant population in the U.S.,” she said. “The government knows more about refugees than they do about you and I.”

With assistance from Catholic Family Center, new refugee families who know little or no English are expected to find jobs and apartments and get to know their new culture, Bickett said.

Such support is invaluable, said Alma Omerhodzic, who resettled in Rochester from Bosnia with her mother and brother in 1997 after her father was killed.

“If there is no one to help, the family can fall apart,” she said.

Omerhodzic said she was fortunate that her mother found work quickly. Now married to a Syrian man, Omerhodzic started a network two years ago to help Syrian families being resettled in Rochester. She also is a volunteer at Mary’s Place.

While the debate rages on about accepting refugees from Syria, Iran, Somalia, Yemen, North Korea, Libya and Venezuela, Omerhodzic said it has motivated community members to step up and call Mary’s Place to inquire about how they can help.

“That (support) was amazing to see,” she said.

EDITOR’S NOTE: The United Nations celebrates World Refugee Day on June 20. As part of the “Share the Journey” campaign, Catholic Relief Services and Catholic Charities USA are offering a toolkit to help parishes and communities host their own celebrations. For more information, visit www.dor.org/index.cfm/catholic-charities/public-policy.