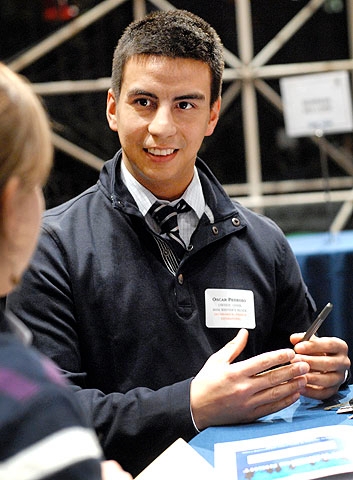 ROCHESTER — Oscar Pedroso readily admits that he has yet to earn a master’s degree in business administration.

But he knows a lot about applying for graduate school to get an MBA, having spent three years on that quest. So, he combined that knowledge — and the stack of application essays he wrote — with the business skills he gleaned from a four-month local entrepreneurship program and created an online business called MBA Writer’s Block, Pedroso said.

"I also spent a lot of money applying to business school," he added. "So I decided to take everything I had learned and throw it out there for people."

The online business idea began brewing when a friend asked to see one of the 20 essays he had written for his applications to such universities as Stanford Graduate School of Business and Massachusetts Institute of Technology’s Sloan School of Management, Pedroso explained. Using Pedroso’s essays and notes as a reference, the friend got into the Simon Graduate School of Business at the University of Rochester, Pedroso said.

While the friend suggested that Pedroso publish an MBA guide as a booklet, Pedroso said that he decided to go with an electronic version and offer access on a website. Thus, MBA Writer’s Block was born and went live last fall at http://mbawritersblock.com/, he said. The website offers free advice through a blog Pedroso writes as well as links to resources. The essay guide costs $54.99.

Pedroso said that he received valuable advice on the specifics of starting up a website business from The Entrepreneurship Network (TEN), which is an intensive, boot-camp-style series of business courses sponsored by Monroe County’s Industrial Development Agency and aligned with High Tech Rochester that provides the classroom space. He took the courses last year.

But Pedroso didn’t go into the program just with the MBA idea — he also is working on an iPhone application with a business partner, Nick Shippers. The two met about five years ago through friends while both were studying at the University of Rochester, he added.

The app process, however, is taking longer than expected as a prototype is required, which is where Shippers — a website designer — comes in, added Pedroso, 30. While Shippers tackles the technical side, Pedroso said that he continues on the business model for the app, while also continuing with the MBA guide.

Shippers said that the app idea began as two separate ideas — Pedroso was thinking of a loyalty-based discount program and he wanted a local event-based app. By combining the concepts, the app they hope to launch will learn a person’s tastes and preferences and connect the person to businesses and events that he or she would enjoy, Shippers explained. It will be called OSNIK, which is a combination of their first names, said Pedroso, who hails from Mamaroneck in Westchester County.

"Our ideas blended together well because we were both motivated by helping local businesses connect better with consumers," Shippers added. "So, we decided to work together on an app that is like your best friend in your pocket."

Shippers said that he and Pedroso make good partners because they have opposite personalities — he is analytical and Pedroso is more social, but they both have backgrounds in nonprofits and health care.

After graduating from college with a degree in economics, Pedroso worked at Rochester General Hospital for three years. He said that he gained valuable experience as a grant writer — which came in handy when he wrote a grant for the Cross Currents Minority Rowing Club, for which he is executive director. During his tenure at RGH, Pedroso added that he was promoted but realized that he was more interested in running his own company.

"You live and learn," he remarked.

Since kicking off MBA Writer’s Block, Pedroso said that he’s been busy just trying to get his name out there locally and in the education world.

"I always encourage the entrepreneurial spirit of people in the community, especially when they are hardworking and … (enthusiastic) on what they do as Oscar," she wrote in an e-mail. "I thought this was a good niche for professional services, because let’s face it, some of us need all the help we can get when it comes to our writing skills. An essay can make or break your application to a top graduate business school so it makes sense that MBA candidates would pay special attention to it. The application process itself can be quite an investment."

Pedroso said that he spent $11,000 on taking entrance exams and visiting potential schools, which are commonly part of the application process. Hiring an admission consultant usually costs a person $100 an hour, he noted.

Now, Pedroso envisions himself incorporating his companies and giving workshops to help others who are facing this challenge, he added. Recently, he has manned booths at conferences to develop that name recognition he seeks, and also hopes to take advantage of his alma mater through advice from other alumni and networking events.

"Especially when you’re starting out a business, you’re worried about so many things," Pedroso said. "But I just have to go at my own pace."