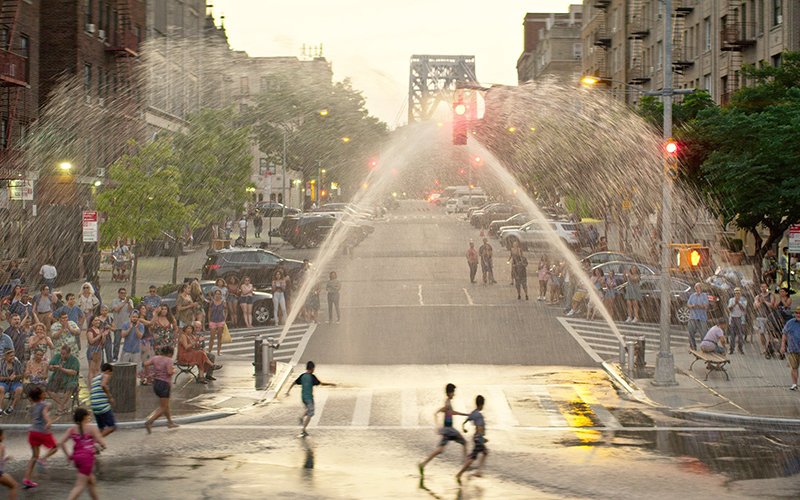 This is a scene from the movie "In the Heights." The Catholic News Service classification is A-III -- adults. The Motion Picture Association rating is PG-13 -- parents strongly cautioned. Some material may be inappropriate for children under 13. (CNS photo by Warner Bros. Pictures)

NEW YORK (CNS) — Composer and lyricist Lin-Manuel Miranda’s award-winning 2008 Broadway hit “In the Heights” (Warner Bros.) comes to the big screen (and to HBO Max) in a sweeping adaptation directed by Jon M. Chu and scripted by the writer of the stage show’s book, Quiara Alegría Hudes.

As it touches on themes of racial dignity and the plight of immigrants who lack legal papers, the generally upbeat and uplifting film maintains a solid moral core. But a few rough spots around the edges make it safest for grown-ups.

Set in northern Manhattan’s Washington Heights, the movie charts the efforts of youthful bodega owner Usnavi (Anthony Ramos) to return to his native Dominican Republic, the scene of his idealized childhood. There, he hopes to reopen the beachside bar his father once ran. (Dad’s good-hearted but eccentric personality is hinted at in the humorous story of how Usnavi acquired his unusual name.)

Usnavi’s “sueñito” (little dream), however, has complicated implications for those closest to him. They include community matriarch Abuela Claudia (Olga Merediz), Usnavi’s warmhearted adoptive grandmother, Sonny (Gregory Diaz IV), the younger cousin he mentors, and Vanessa (Melissa Barrera), the aspiring fashion designer for whom he’s fallen.

Additionally, the broadly focused proceedings follow the parallel romance linking Usnavi’s best friend, Benny (Corey Hawkins), with gifted college student Nina (Leslie Grace). The latter’s fraught experience at Stanford University becomes a source of conflict with her father, Kevin (Jimmy Smits), and of potential disappointment for those in the area who see her as a trailblazer.

Chu’s vibrant picture also introduces us to a variety of neighborhood characters, and it’s partly through their gossip that some less than family-friendly material comes momentarily to the fore. Thus, while Usnavi and Vanessa are depicted as having a chaste relationship, Benny is teased for having had a “roll in the hay” with Nina. Mention also is made of two local men being discovered in bed together.

Along the same lines, we’re shown that Usnavi’s shop, celebrated for its morning coffee, dispenses condoms as well. Parents will have to weigh whether these few potholes along Usnavi’s journey, together with occasionally coarse dialogue, necessarily put this celebration of Latin heritage out of reach for older teens.

The film contains brief sexual references, including to homosexual activity and contraception, a couple of profanities, about a dozen milder oaths as well as several crude and a few crass terms. The Catholic News Service classification is A-III — adults. The Motion Picture Association rating is PG-13 — parents strongly cautioned. Some material may be inappropriate for children under 13.

Mulderig is on the staff of Catholic News Service.