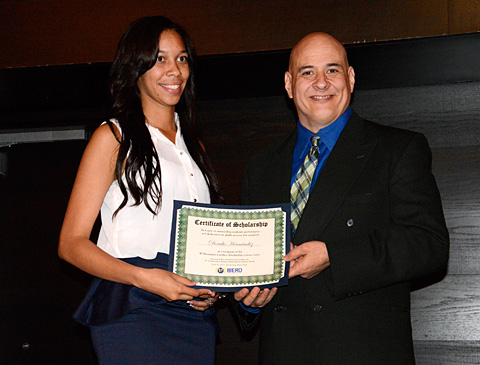 ROCHESTER — More than 40 area Latino students were recognized for their academic achievements during the 18th-annual Ibero-American Gala and Hispanic Scholarships Recognition Awards held June 8 at the Hyatt Regency Hotel.

"There are students from throughout the areas, from all different countries," she said.

In addition to awards from Ibero’s Hispanic Scholarship Endowment Fund, scholarships also were presented by area colleges, corporations and community organizations. One student received a scholarship to Carnegie Mellon University, she added.

"Locally and nationally there is a shortage of Latino medical professionals including nurses, physicians, physician assistants, nurse practitioners, and dentists," John Urban, the Greater Rochester Health Foundation’s president and chief executive officer, said in an e-mail. "Because patients are most comfortable receiving care from someone who understands their language and culture, the shortage of Latino health professionals can present a barrier to care. For  these reasons, the Health Foundation is pleased to provide scholarship support to 14 students who have chosen to attend college for degrees in a health or medical field."

Doralis Hernández is this year’s recipient of El Mensajero Católico’s scholarship, which was first presented in 2011.

Having their oldest child go off to college will be "bittersweet" for him and his wife, Idalis, said Hernández, chief executive officer of First Capital Payments.

"We had Doralis at a very young age, but we always wanted the best for all our children," he remarked. "We had to get our life together and missed out on a lot of things. … The sweet part is that she’s moving on to bigger and better opportunities."

Doralis said that she will be the first in her family to attend college. And in addition to the Mensajero scholarship, she has been awarded an $8,000 Presidential scholarship from the university and another grant, she said.

"I think I make my family pretty proud," she added.

Doralis said that her interest in law stems from watching such television shows as Law & Order and CSI. She considered become a forensic investigator until she enrolled in a special program offered at Webster Schroeder High School connected to BOCES, Doralis explained.

Once she learned about penal law through the program, she was hooked, she said. Now, she hopes to become a criminal lawyer.

She is grateful that Ibero recognizes the achievements of Latino students in the city and suburbs who are going on to higher education and potentially successful careers, Doralis added.

"Whatever it takes to motivate Hispanics to go to school — and not only go to school (but) pay for school, that’s great," she said.