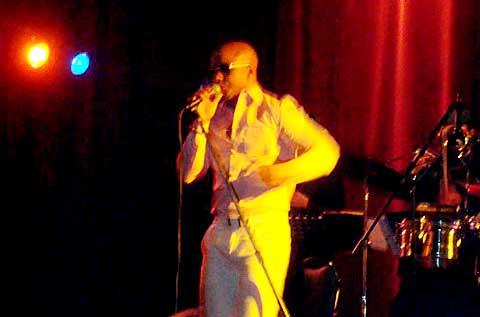 Saludos Amigos of El Mensajero! On May 8 Tango Café produced an unforgettable event celebrating Mother’s Day. In the elegant ballroom at Rochester’s Memorial Art Gallery, hundreds of people attended to witness the performance of Puerto Rican salsero Michael Stuart. Stuart, with hits like "Niña Bella," "Amor A Primera Vista," "Princesa" and many others, is one of this generation’s salsa crooners who can really give you a performance.

The event brought people from all over upstate New York, from Buffalo to Albany and as far south as Binghamton. The salsa community of upstate New York was present to support an event made for and by salseros. Lots of people dressed in their Sunday best for this special occasion celebrating Mom’s Day. That same night another Latin music event was taking place across town, to which we can say that Rochester is a great town for Latin music and that there are enough people for different events to happen.

Before we talk about Stuart’s performance, the opening band was Rochester’s own Bachata Imperio. Imperio’s repertoire consisted of bachata covers well performed by vocalist Jenny Cabrera, along with Ramon Gutierrez and Andy Fade. Unfortunately for this writer, they were too loud, which it wasn’t their fault. The ballroom at the MAG is a tough place for acoustics, mind you, with its cathedral ceiling and capacity for almost 500 people. The sound can get lost and sometimes it is hard to handle depending on the amount of people. Bachata Imperio’s performance was well-received, lots of people dancing bachata during their set and also trying their new moves just learned from bachata workshops held earlier in the day. Speaking of workshops, Tanya Kensinger (La Alemana) and Jorge Burgos (Ataca) from Island Touch Dance Studio in Tampa, Fla., came to Rochester and held at the Tango Café Dance Studios bachata workshops that were heavily attended, and people loved it. Ataca and La Alemana taught in their workshops all levels of bachata dancing and even how to flash and show off those recently learned moves.

Now, back to the concert, where after a musical intermission by the DJ, as the band under the leadership of Victor Antonetti Jr. began to come out on stage, the audience, specifically the female members, began to gather close to the stage to grab a peek at (or to touch) Stuart. A medley of Stuart’s hits that was created during sound check that same day brought out the awaited performer, who was welcomed with loud applause. Stuart, dressed in sunglasses, a pink shirt and white pants, came out full of energy and performed "Amor a Primera Vista," one of his first hits. The band was tight and full of swing, and Stuart was a great performer, moving all over the stage and posing for photos while singing and dancing. The crowd was divided in two in the ballroom: Toward the front of the stage people were watching Stuart’s performance, and at the back of the ballroom people were dancing to the sultry songs. After the performance, which was an hour long, Stuart took pictures with his fans, and a lot of people had a great time

This Mother’s Day event was a complete success. Talking to some of the attendees — some of who were witnessing a Latin music concert for the first time — they said they loved the elegance and the amount of great music and dancing. The crowd was well-dressed, and the venue was unpatrolled and the perfect place to make an event of such caliber produced by Tango Café!

Rivera is CEO of Latin Roc Entertainment (www.latinroc.com) and host of Esencia Latina on Jazz90.1 FM/WGMC-FM radio from 6-10 a.m. Saturdays and on www.jaz091.org. Contact him at latinroc@gmail.com.