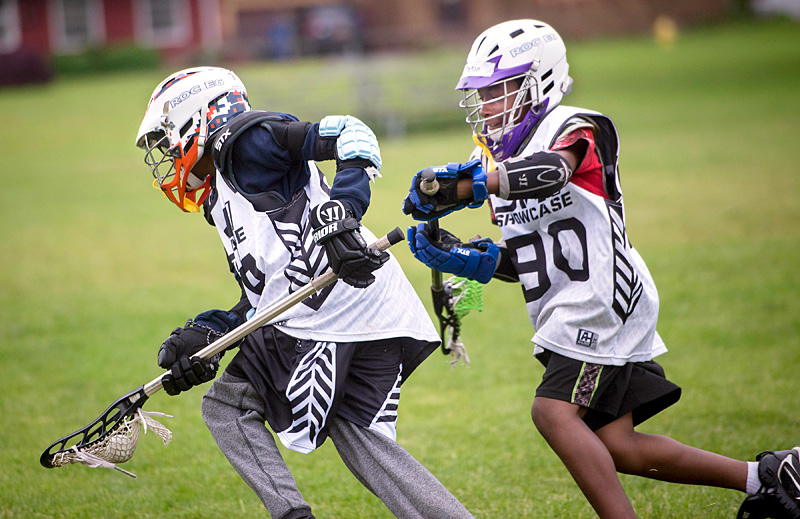 Lacrosse player work on a drill during practice at School 33 on Webster Ave in Rochester on June 5. El Mensajero Photo by John Haeger

Although he had played catch with a lacrosse stick at the age of 8, he didn’t know the sport’s name until he was 13.

Since he picked up the sport so quickly, the lanky East High School freshman said he has moved up the ranks, going from playing on a modified team, to playing on a junior varsity team, to scoring in a game he played in with the Rochester City School District’s only varsity team, which is housed at East. He also plays for a team that is part of the ROC E6 lacrosse league that helped introduce students to the sport a decade ago.

"I like that it’s fast," Jahmeir said of the sport during a June 5 practice at Webster Avenue Park for the ROC E6 league. "(The pace) makes it easy for me to score."

He also likes that players improve their skills by watching videos of college teams, which makes students think about going to college themselves, he added. Jahmeir already has set big goals for himself in lacrosse.

"Hopefully, one day I will play D1 (Division One)" in college, he said.

To have more students become scholar athletes and go to college is one of the goals of the individuals and groups who worked to bring lacrosse back to the city school district after a nearly 40-year hiatus. The RCSD’s board of education recognized those efforts with "Yes We Can" awards presented at a May 25 ceremony. Those awards were given to the following individuals and groups:

* The Rochester Knighthawks, which has donated equipment and whose members have coached students on the RCSD lacrosse teams, and Karla Fichter, owner of Diamond Packaging, which has provided financial support.

* Arkee Allen, founder of ROC E6, a nonprofit organization that provides sports programs for children in the City of Rochester.

Allen founded ROC E6 more than 11 years ago to offer the outlier sports of wrestling and lacrosse to city children, he said during a league practice June 5. He chose lacrosse after seeing second-graders in the West Irondequoit School District decked out in their gear "like a high-school team," he said.

"I said to myself, ‘How cool would this be in Rochester? We need this in the city,’" Allen explained. "It piqued my interest."

The first year ROC E6 entered a team into the Rochester Area Lacrosse League, which includes teams from throughout Monroe County, the team’s record was 0-32, he said. But only a year later, a team from ROC E6 won a game and kept on winning, he said.

When he became assistant principal at Rochester’s UPrep Charter School in 2012, Allen said he decided the RCSD needed to add lacrosse to its offerings. So he approached his friend Cotto about starting a city lacrosse league. At the time Cotto was assistant director of athletics at East High School, where the ROC E6 league initially held practices.

Cotto said he was on board immediately.

"We want to provide our young men and women with the same things that are provided outside of this community," he said of offering city students the opportunity to play lacrosse.

The two worked aggressively to create modified lacrosse teams at Frederick Douglass Middle School and School of the Arts, Cotto explained. The middle school had started a pilot program a year earlier to see if there was interest in the sport beyond the ROC E6 league.

Fitcher, a longtime ROC E6 supporter, reached out to the Knighthawks for equipment support for the modified teams. When the RCSD program grew to junior varsity and varsity teams, the Knighthawks helped coach the varsity players, Allen said.

During the 2014-15 school year, an additional team formed at East, Cotto said. City students now have the chance to play on two modified teams, two junior varsity teams and one varsity team, he said. Starting in the 2017-18 school year, the district will add a girls’ team at the modified level as well, Cotto said.

He is happy to play a role in helping the lacrosse program grow in the city, as the sport provides the kind of discipline and focus that benefits students in all areas of their lives, he said. The game also helps to build character, hone leadership skills and provide teamwork experience, Cotto noted. And with the support of an organization like the Knighthawks, the students also are exposed to professional athletes and college graduates, he added.

Jalisa Egues, who will be a freshman at Our Lady of Mercy High School, said playing in the city league kept her in shape and helped improve her confidence, as she initially played with boys as a fifth-grader.

"My mind-set was to make a difference for girls in the city," noted Jalisa, 15. "I wanted to encourage other girls to start playing lacrosse even if you’re playing for boys. I wanted to show boys that girls are strong, capable, talented and many others things. Also, Coach Art (Alvut) was an amazing coach to have. He encouraged me to bring out my leadership skills, strength, and to overcome my obstacles."

Playing lacrosse also had a great impact on London Booker, even though the sport didn’t make its return to Rochester in time for him to play on a school team or in the ROC E6 league. Having played for a suburban team during his middle-school years, he was left without a team in high school. In order for him to continue playing, his mother moved from Rochester to the Gates-Chili School District, where he became a star player, Booker said. He gained the attention of Roberts Wesleyan College, which he chose to attend. Booker went on to become captain of the Roberts Wesleyan team for two years, he said, and also coached younger lacrosse players while in high school and college.

After earning a bachelor’s degree in education, Booker has returned to teach in the city school district and will go on to work on his master’s degree. He also is coaching for the ROC E6 league.

"This is a sport predominantly played by white Americans," he said. "There are not many opportunities for this sport for kids who live in the city. I was fortunate enough to get to play the sport. It’s only right to come back and give (other kids) the same opportunity I was given."

Stories like Booker’s validate why Allen is proud to see the movement he helped start continue to flourish. His ROC E6 league has doubled from its original group of 50 players to more than 100, he said.